Not many in Belfast know of the former Ulster Medical Hall on Castle Place. The small premises still exist although now its a Costa coffee shop. However this small shopfront on 22 Castle Place was the birthplace of Cantrell & Cochrane – the C&C brand now known across the world.

Thomas Joseph Cantrell was born in Dublin in 1827. As a qualified doctor he moved and settled in Belfast. He was employed by the chemists Grattan and Company in the city and rose to the position of principal assistant. Grattan & Co Apothecaries and Chemists were a long established firm housed in Plough Buildings in Cornmarket.

Grattan’s also manufactured soft drinks, originally sold on the basis of their medicinal value. While here Cantrell is credited with inventing the first carbonated ginger ale. It was golden in colour, sweet, but with a strong ginger spice flavour.

In 1852, at the age of 25, Thomas Cantrell went into partnership with James Dyas. The pair set up their own chemist and ‘aerated water’ business at 22 Castle Place, known as the Ulster Medical Hall.  The firm produced mineral waters, ginger ale, soda water, lemonade and from 1856 sarsaparilla. Dyas subsequently left the company in 1859 to found his own business. Cantrell was to go from strength to strength.

Thomas continued to trade under the name T J Cantrell. By the early 1860’s the firm had depots in Dublin, Liverpool and Glasgow. In 1863 Cantrell’s had expanded to 25 Bank Street, the site of the former Foyle’s brewery.

In 1866 Thomas began to export his famous Ginger Ale to America, where it was immensely popular.

“the United States connection is especially important, and frequently makes exceedingly heavy demands upon the productive resources of the house….the American customers by whom they are so loyally and extensively supported, and whose full confidence they have won and retained by the uniform merit of their manufactures and the honourable methods pursued in all the transactions…”

By 1868 Cantrell was advertising for further investment. Henry Cochrane joined the business with the sizeable investment of £2,000.

With these funds an artesian well was sunk at Cromac Spring in Belfast. An artesian well means the water reaches ground surface by natural pressure and does not need to be pumped.

“Dear Sirs – My analysis of the Cromac Water sent me from your Springs shows it to be a Water of superior purity, and remarkably free from both the mineral and Organic impurities which many waters in this country contain. Experience has proved the Cromac Water to be well suited for the manufacture of Beverages and Mineral Waters.

The Cromac Works was a large square building stretching from Cromac Street to Chichester Street at Victoria Square. Its location near to the docks and railway station facilitated easy distribution.

The factory was fitted with the very latest machinery and labour-saving devices. The filling of siphons, bottling and corking processes were all done by machine – Riley’s Patent Rotary Bottling Machine. This greatly increased the speed of production.

Impact of the Temperance Movement

By the late 1880’s the company employed over 500 people and was producing 160,000 bottles a day, including Club Soda, Club Ale and Sparkling Montserrat. Montserrat was described as “the drink par excellence for the gouty and rheumatic”.

The annual production of the Belfast and Dublin sites was 30million bottles. The firm also employed clerks, accountants and a fleet of horse-drawn delivery vans.

Cantrell & Cochrane also managed to secure lucrative exclusive contracts with major shipping lines such as Cunard, Inman and Montreal. In 1877 they trademarked the ‘Club Soda’ name in Britain and Ireland.

“In reviewing the manifold industries whose vigorous and successful development has endowed modern Belfast with a world-wide commercial fame, it is impossible to overlook the claims and the importance of the ever-progressive and increasing trade, the manufacture of aerated waters … none is more prominent or noteworthy than the Cromac Building, the Belfast headquarters of the leading and influential firm of Messrs. Cantrell & Cochrane, whose achievements have been specially conspicuous and distinguished in the industry with which their name is identified”

Up until the 1900’s Cantrell & Cochrane also produced ‘ballast bottles’. These are glass bottles with rounded bottoms. The bottles were designed to be stored on their sides so that the cork remained moist and did not dry out.

In 1898 Cantrell & Cochrane became a private limited liability company. Their success continued and they were the recipients of many awards and commendations including winning a medal at the prestigious Paris Exposition Universalle in 1899. In 1901 the firm was awarded a Royal Warrant from Edward V11, King of England.

The Life of Henry Cochrane

Henry Cochrane had been born in County Cavan on 21st December 1836. His father William was a gentleman farmer at Graughlough House and his mother was Sarah McQuade. As a young man he worked in the Belfast linen mills and as a shop assistant. On 10th May 1865 Henry married Margaret Gilchrist at the Union Presbyterian Chapel in Dublin. The couple had seven children, 4 boys – Richard, John, Ernest and Stanley and 3 girls – Sarah, Ellen and Margaret.

As well as chairman of Cantrell & Cochrane, Henry was an alderman of Dublin Corporation, a JP for counties Dublin, Wicklow and Cavan and was a member of the board of governors for the South Dublin Union. On 8th October 1903 he was appointed a baronet of the United Kingdom. Henry Cochrane died on 29th September 1904 at his home, Woodbrook, Bray. He was 68 years old.

“Alderman Sir Henry Cochrane enjoys great personal popularity, both in Dublin, where he resides, and in Belfast, and in many other Irish towns where he is well and favourably known for his geniality and generosity of character”

The Life of Thomas Cantrell

Thomas Cantrell married Mary Hanlon, the daughter of a Belfast merchant. The ceremony took place in St Anne’s on 5th September 1855. In 1870 the family were residing at 1 University Square in the town.

In 1883 Thomas Cantrell retired from the business due to poor health. He died in September 1909 in Hampshire, England.

The Turn of the Century

At the turn of the twentieth century, Cantrell & Cochrane was one of Ireland’s largest exporters and the biggest mineral water manufacturer in Ireland and Britain. The company’s reputation was world-wide. Belfast Ginger Ale was by far America’s favourite soda at the time.

In 1904 when Henry Cochrane passed away, his son Ernest Cecil Cochrane succeeded to the chairmanship.

From Cantrell & Cochrane to C&C Today

In 1925 Cantrell & Cochrane, or C&C as it is more commonly known today, was sold to the Company of E and J Burke.

The business continues to thrive today manufacturing soft drinks as well selling Tenant’s Lager, Bulmer’s Cider, Clonmel Pure Irish Lager and Magner’s Cider among other brands. It has become a large international business but it all originated with that little shop in Castle Place selling ginger ale!

Click the gallery images to view full size on mobile devices. Swipe up on mobiles to quit the slideshow 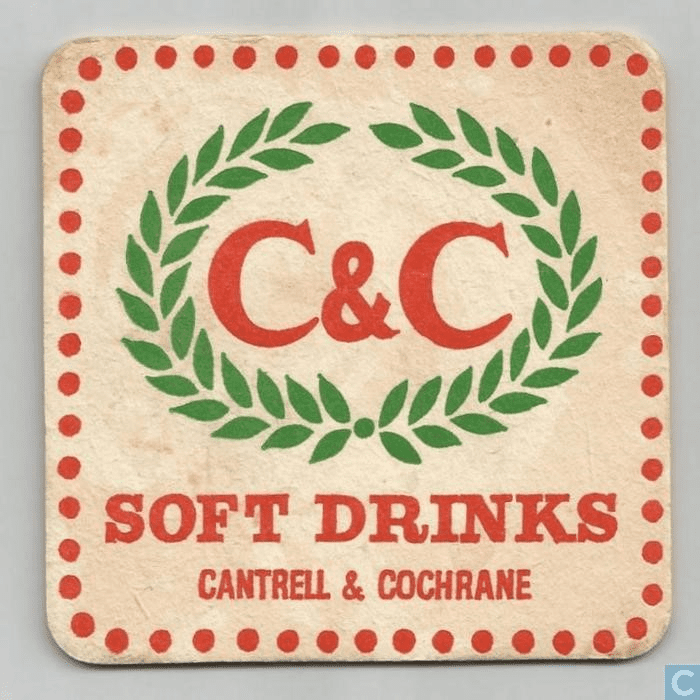 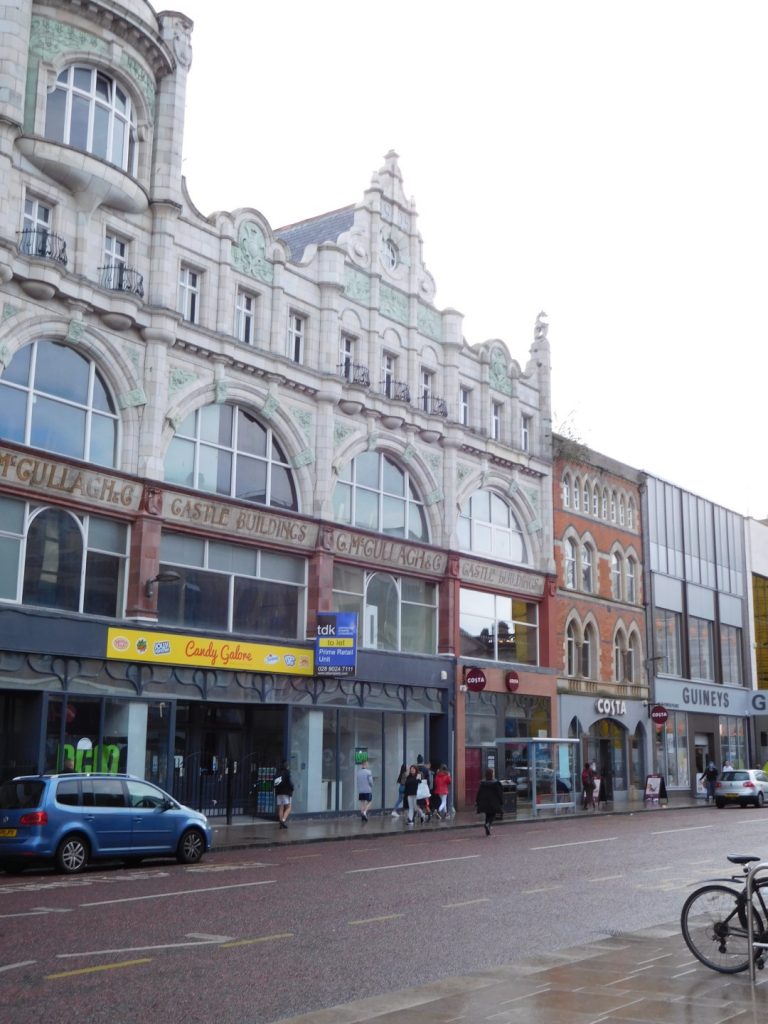 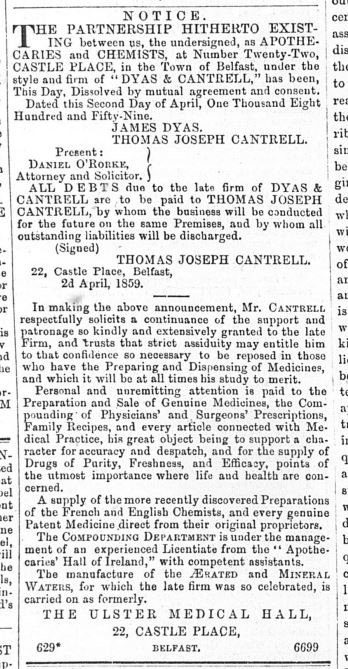 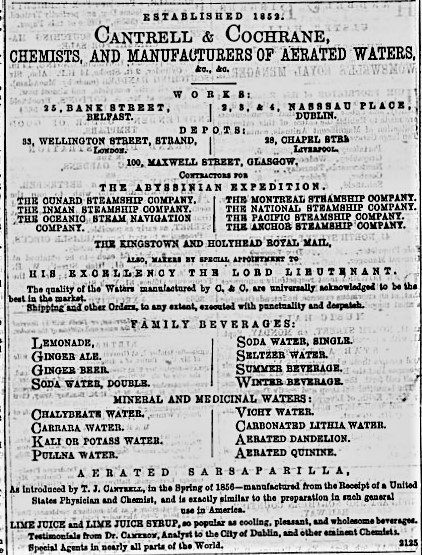 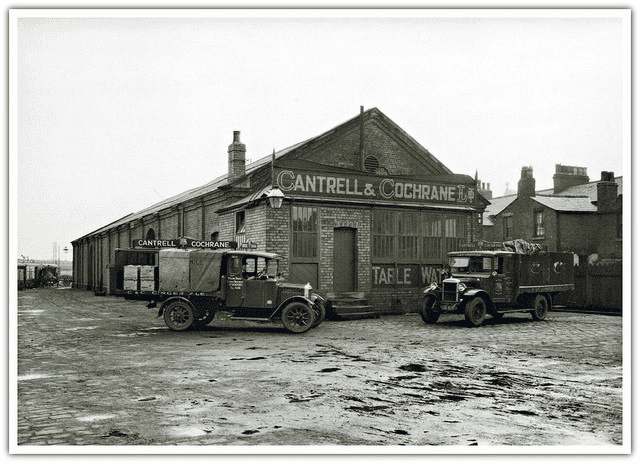 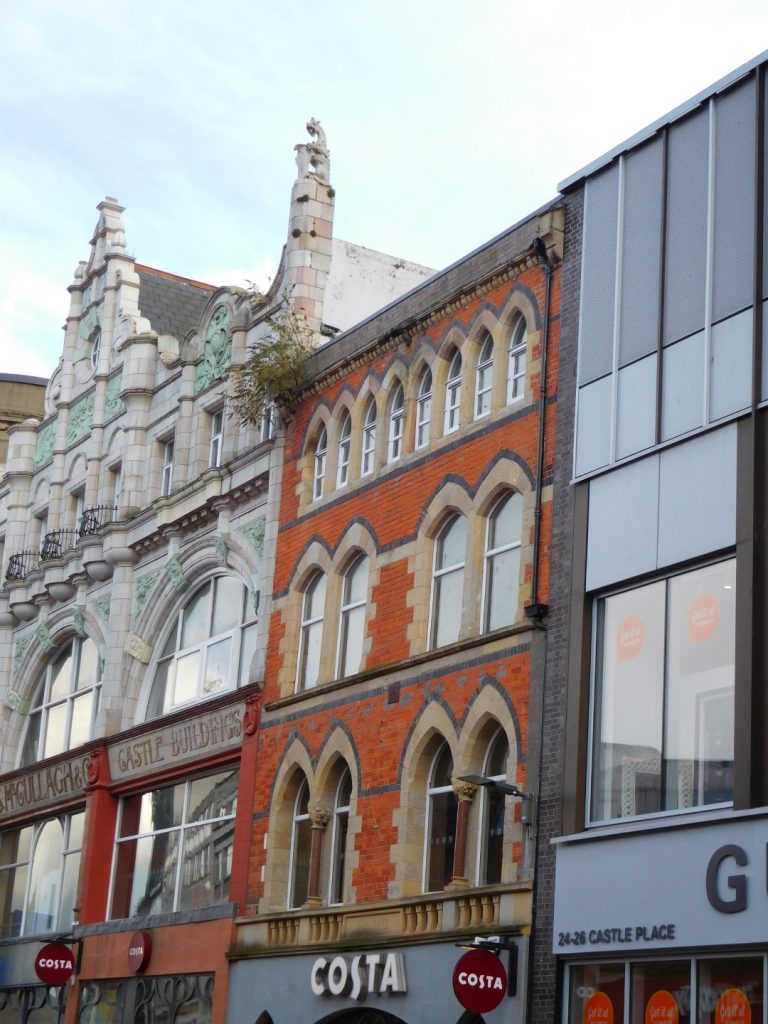 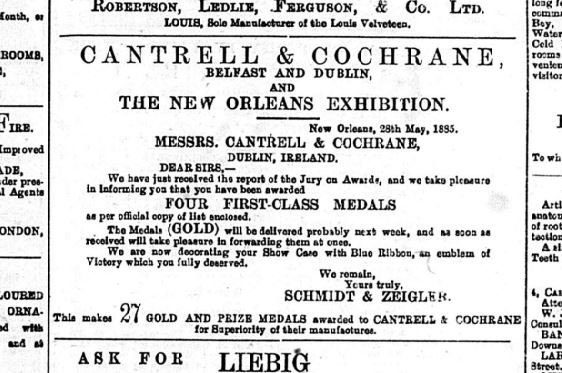 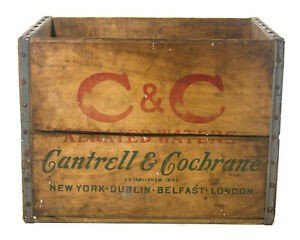 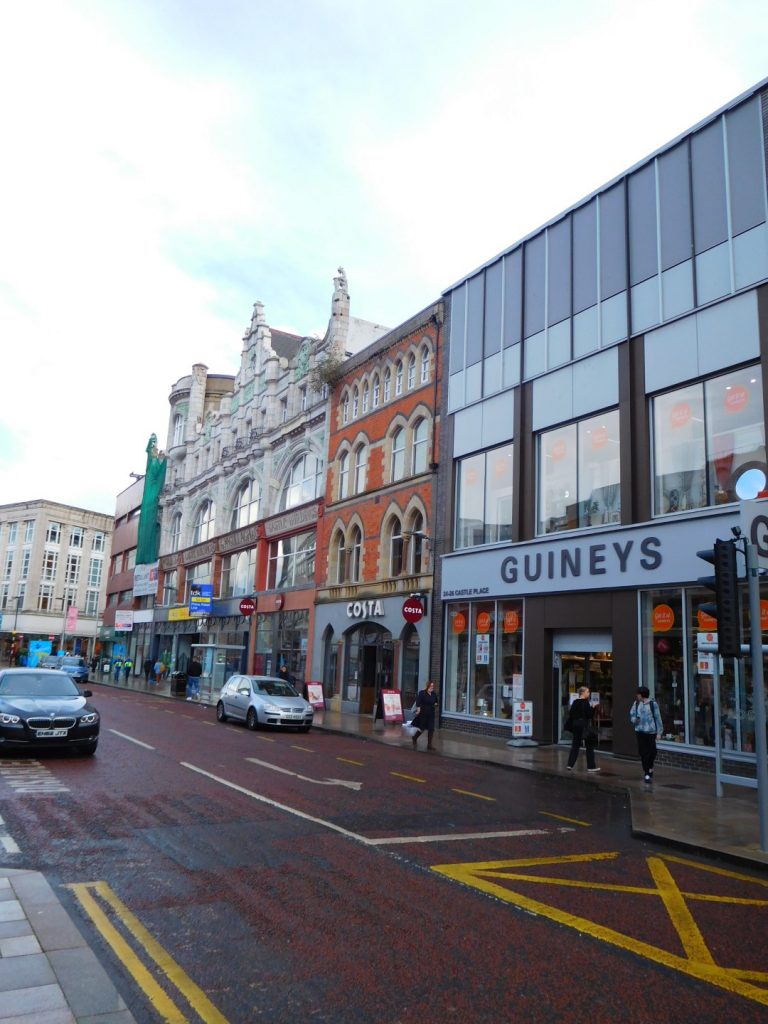 Wonderful history of C and C would I be right in thinking that at one time the md was Sir James Norrit? Who became Lord Mayor of Belfast? Other mineral water companies I remember in Belfast Thompson’s, Briggs, New City.In Lurgan/Portadown was there Classic who had unusual flavours?

Yes Malcolm Sir James Norrit was MD. (We tend to focus on the older histories of people & products to bypass modern sesnsitivities). I remember Classic lemonade when the ‘lemonade man’ used to do the rounds on Friday nights when I was young. Haven’t thought about that for years.

People who want to start new businesses do not realize what it is exactly. A lot of info was mentioned on them about how that can be avoided easily. They have done it amazingly. I am going to share this blog.

A great old trade. We are constantly surprised by the memories of family members/ ancestors who worked for/with companies and individuals mentioned.