What are the Dark Hedges?

The Dark Hedges are a stretch of the Bregagh Road between the towns of Armoy and Stranocum in County Antrim. The road is flanked with around 90 beech trees which arch over creating an atmospheric verdant tunnel. The result is so striking that the location has featured in several episodes of the HBO television series Game of Thrones. In the show it is known as the King’s Road in Westeros. The Dark Hedges have also appeared in the film Transformers: The Last Knight 2017

Origin of the Dark Hedges

However the Dark Hedges were actually the tree-lined avenue to a large Georgian manor house called Gracehill. The land had originally been granted to James Stuart, the English ambassador to Turin, by James 1. On route to his new possessions James was drowned.

The estates passed to his grandson William Stuart, then to his son Irwin Stuart, a preacher. It was Irwin’s son, another James, who built Gracehill in 1775. He named it after his wife Grace Lynd, a doctor’s daughter from County Tyrone. The couple went on to have 9 children.

The house and the lands remained in Stuart hands for several more generations. Today the house and grounds are privately owned but part of the estate has been sold and is now a hotel (with its own Game of Thrones Door, see below) and an 18 hole golf course.

The dramatic interplay of light and shadow caused by the intertwined branches lend the area an ethereal feel and it is not surprising that a number of ghost stories have arisen concerning the Dark Hedges.

The most popular tale is that of the Grey Lady. A spectral figure who flits among the trees and then disappears into the mist. Some claim she is the ghost of a maid who died in suspicious circumstances in the Big House and cannot rest until her death is avenged.

Others believe the Grey Lady is actually Margaret a daughter of the Stuart family. She was unmarried and lived at Gracehill until her demise at the age of 89. Margaret goes under the rather unflattering nickname ‘Cross Peggy’.

Another theory is that the phantom figure is from a nearby graveyard, which folklore says has been abandoned, forgotten and hidden in the adjacent fields. On Halloween night, when unsettled souls are said to wander, you would do well to avoid the Dark Hedges.

Preservation of the Dark Hedges

Originally there were 150 beech trees planted on the avenue to create a magnificent first impression on arriving at Gracehill House. Over time a number of the shallow-rooted trees were damaged or toppled in high winds. In 2004 the Department of the Environment placed a Tree Preservation Order on the remaining trees.

In 2009, a Heritage Lottery Grant enabled the formation of the Dark Hedges Preservation Trust. However, Storm Gertrude in 2016 felled two of the mighty trees and caused damage to many others. There are now less than 90 of the trees remaining. It is the aim of the Dark Hedges Trust to protect and maintain the surviving Dark Hedges, to preserve this natural phenomenon for as long as possible.

From Dark Hedges to Game of Thrones Doors

The trees that suffered at the hands of Storm Gertrude have been transformed into intricately carved doors. Ten doors have been made from the wood, each displaying a scene from the iconic Game of Thrones series.

These doors have been installed in pubs and inns throughout the north of Ireland, close to where filming took place. Fans can even print out a ‘passport’ with unique stamps to mark their ‘doors’ journey. Ten locations need to be visited stretching from Ballintoy in the north to Newcastle in the south, Enniskillen in the west to the Ards Peninsula in the east!

The Dark Hedges have become a popular tourist attraction on the Causeway Coastal Route. Visitors are asked not to park on the road itself but in the nearby free car park at the Hedges Hotel, just off the Ballinlea Road. This is for safety and conservation reasons.

There are a number of companies offering coach trips that include the Dark Hedges on their itinerary. Some of these are Game of Thrones themed while other focus on the coastal delights of the north Antrim shoreline.

The Game of Thrones doors can be found in the following pubs/ inns: 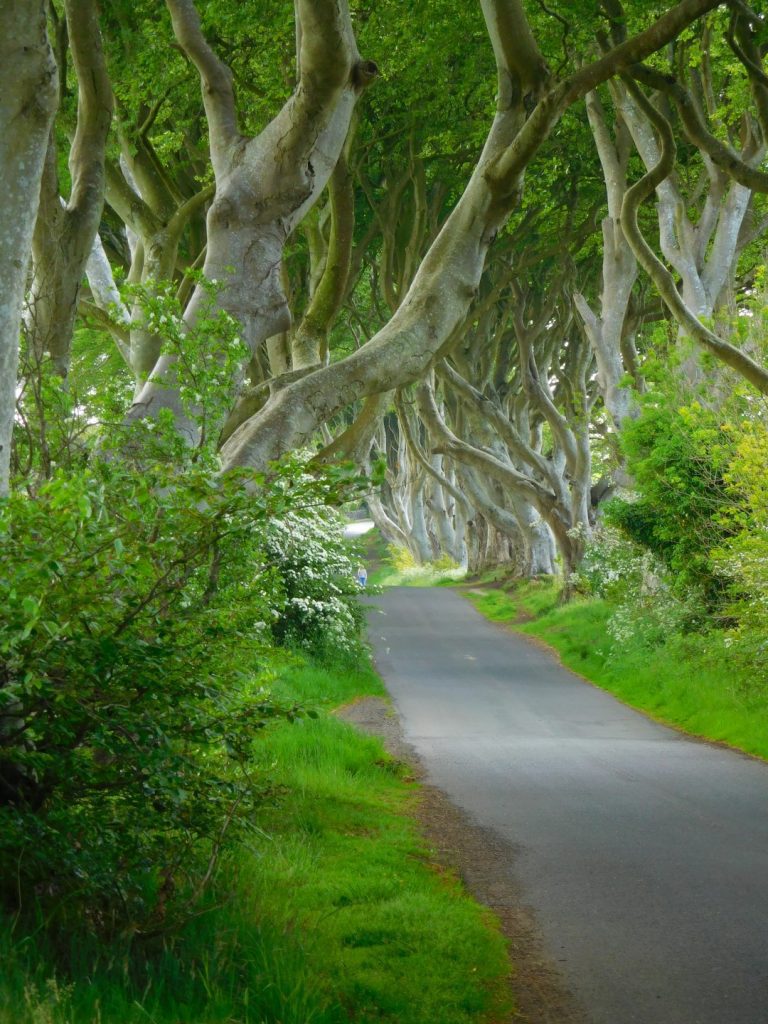