Mallusk Burying Ground is another of the old cemeteries around the country with a few tales to tell. The word “Mallusk” is the modern name for the ancient parish the ‘Grange of Molusk’ near Templepatrick in County Antrim.

Excavation at the graveyard has revealed a ‘bullaun stone’ sheltered beneath a tree. These ancient stones are common at church sites and were used as mortars to grind grain with a pestle. The stone has a circular hollow which led local people to refer to it as the ‘Mallusk well’ however, although almost always filled with water, it is only rainwater.

Another interesting archaeological discovery was that of a partially infilled souterrain. This is a man-made, stone-lined underground chamber. Dr Stevenson in his booklet of 1825 refers to “its graveyard, under which is an extensive cove, still remains”. This strongly suggests a very early Christian occupation of the site.

In the fourteenth century the Knights of St John erected a church at this location. Lewis’s Topographical Dictionary 1837 describes the area “This place is said to have belonged to the preceptory of the Knights Templars in the adjoining parish of Templepatrick, who had an establishment here also, of which there are no vestiges”. It is a pity that nothing remains of this church building. The Dictionary continues “There does not appear to have been a church since the
Reformation, but the burial-ground shews where the edifice originally stood”.

The graveyard itself is a tranquil place near the little hamlet of Mallusk. In past times it would have been quite isolated though the surrounding area is quite populated now.

A number of memorable figures are interred there including:-

It is the final resting place of William Morrison the ‘Bard of Mallusk’. Morrison was born on 14th July 1881 in Old Bush House opposite Old Scullions Road. The home originally was a blacksmith’s forge worked by his grandfather Frank. William’s mother’s family, the Adams, owned the Crown and Shamrock Inn, still a popular pub nearby on the Antrim Road today. Morrison earned his living in the linen trade but had an interest in journalism and poetry. Most of his work reflects his love of nature and his dismay at the growing urbanisation and industrialisation of his local area.

Farewell to the fields, once loved by all,

The song of the lark and the plover’s sweet call.

Adieu to the hedges of hawthorn and broom,

That gave such a charm, with a rich mass of bloom”

from A Dream of the Past, William Morrison

The renowned antiquarian and historian, Francis Joseph Bigger of Ard Righ, is also buried here, along with many of the Bigger family who settled in this region. The area of Hightown, now a substantial residential area, was once known as Biggerstown.

The most famous grave in the cemetery belong to a key figure in the 1798 Rebellion – James “Jemmy” Hope – the Weaver Patriot. Jemmy. a Presbyterian, was a radical who believed that all people had the right to prosper in an independent Ireland, that the “penal chain” that kept the poor subservient to the rich had to be broken. He fought alongside Henry Joy McCracken at the Battle of Antrim. His headstone reads

“Sacred to the memory of James Hope….One of nature’s noblest works, an honest man….In the best era of his country’s history a soldier in her cause, and in the worst of times, still faithful to it: ever true to himself and those that trusted him. He remained to the last unchanged and unchangeable in his fidelity”.

To the right of Jemmy’s grave lies that of his son Luke Hope. Luke founded the short-lived ‘Rushlight’ magazine on 3rd December 1825. Unfortunately he died at the age of 33. The inscription on his tombstone is very poignant.

“To the memory of Luke M Hope [Editor of the Rushlight]. Whose life was distinguished, by, the superiority of his talents, The purity of his principles, And, The simplicity of his manners, This Monument, Is placed by a few of his many friends, Who valued his worth, And regret his premature death. The tear that we shed though in secret it rolls, Shall long keep his memory green in our souls”.

Another noteworthy feature of Mallusk Burying-Ground is the presence of the Resurrection Lamp. This old iron lampstand was originally situated in the centre of the graveyard. After a funeral the lamp would be lit to aid the deceased’s family in their vigil over the freshly dug plot in order to thwart bodysnatchers.

Robert Armstrong in his book Through the Ages to Newtownabbey, recalls a story of some such villains. Two bodysnatchers had exhumed two coffins from the graveyard. “They had been promised a hefty reward, but as they made their way along the Old Coach Road, in their horse-drawn cart, with the booty concealed below a large tarpaulin, a drunkard decided to hitch a lift. He hopped on the cart and secretly snuggled down between what he thought were two wooden boxes”.

Unawares, the bodysnatchers carried on with their journey until they reached the junction with the Hightown Road. Here a disagreement broke out between the two as to which was the quickest route to Belfast, “when suddenly the tarpaulin was lifted and a bedraggled figure poked its head out from underneath and said ‘Will you two make up your minds or we’ll never get home!” The reaction of the bodysnatchers can only be imagined. Lets hope it helped them change their ways! 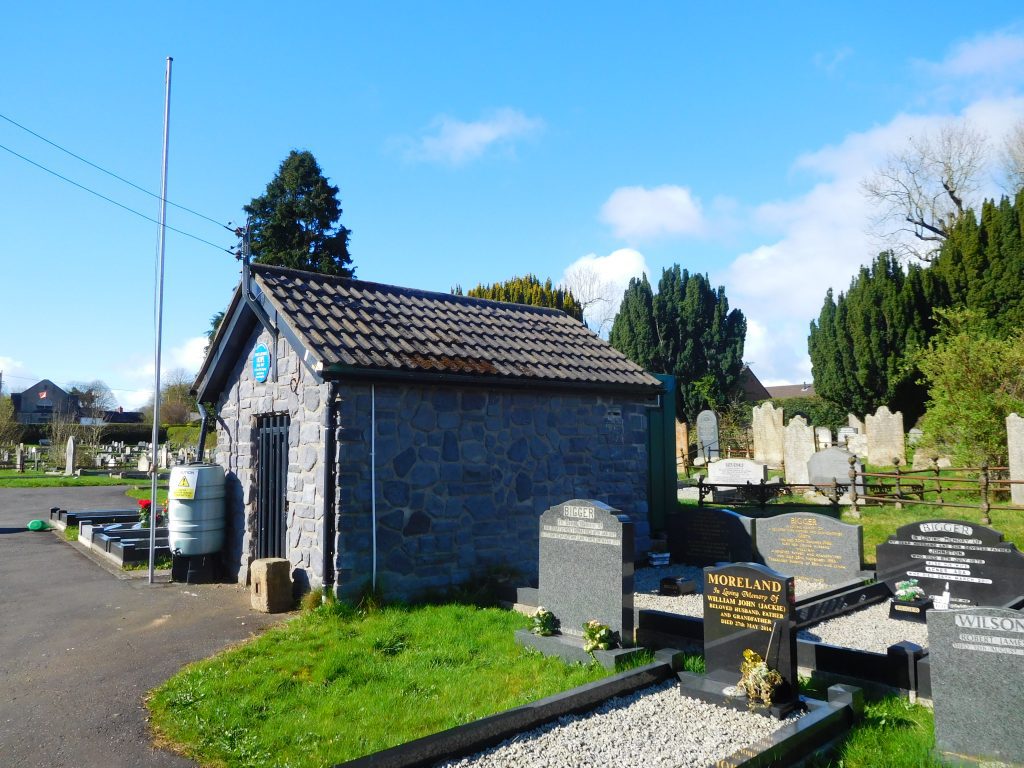 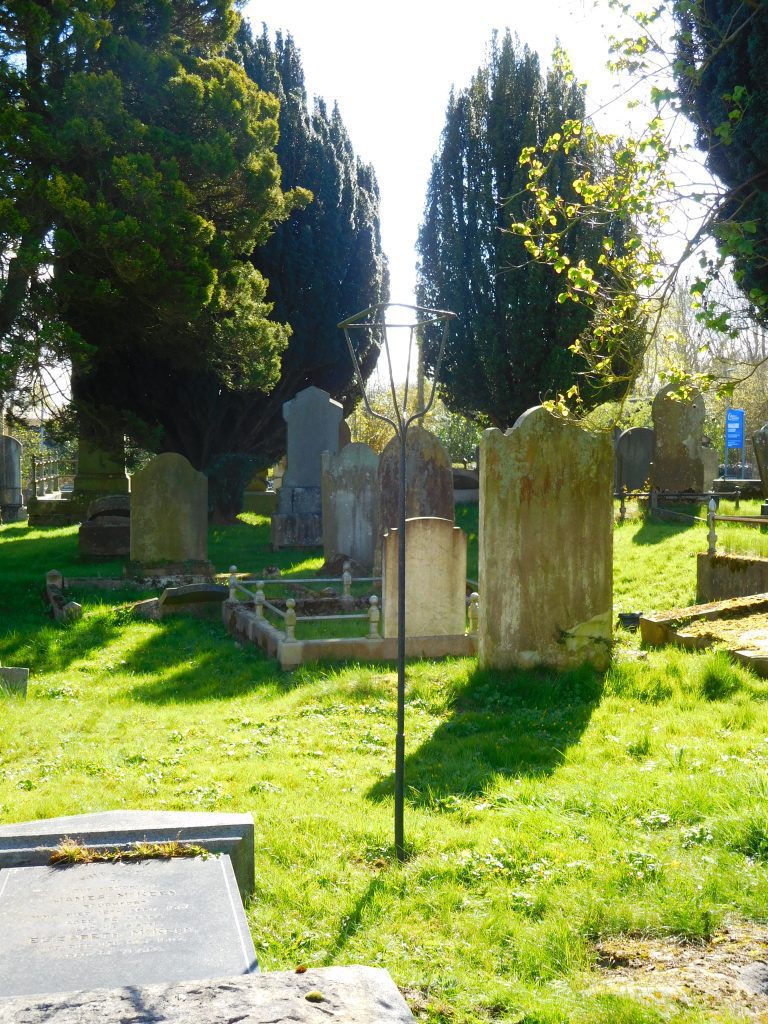 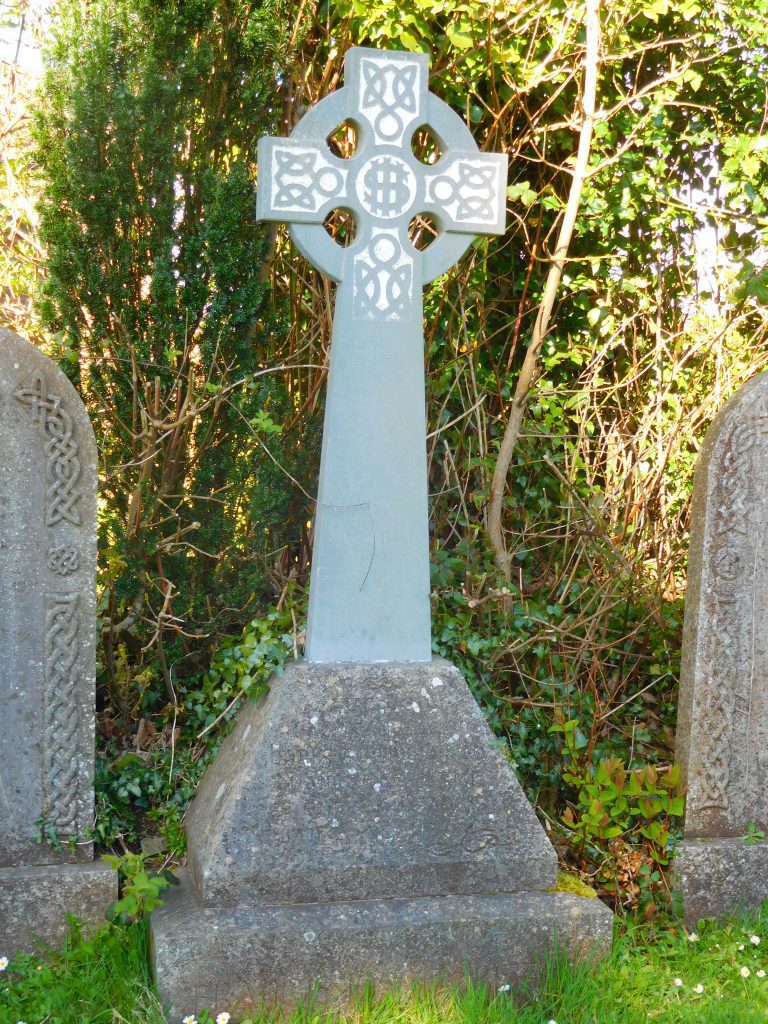 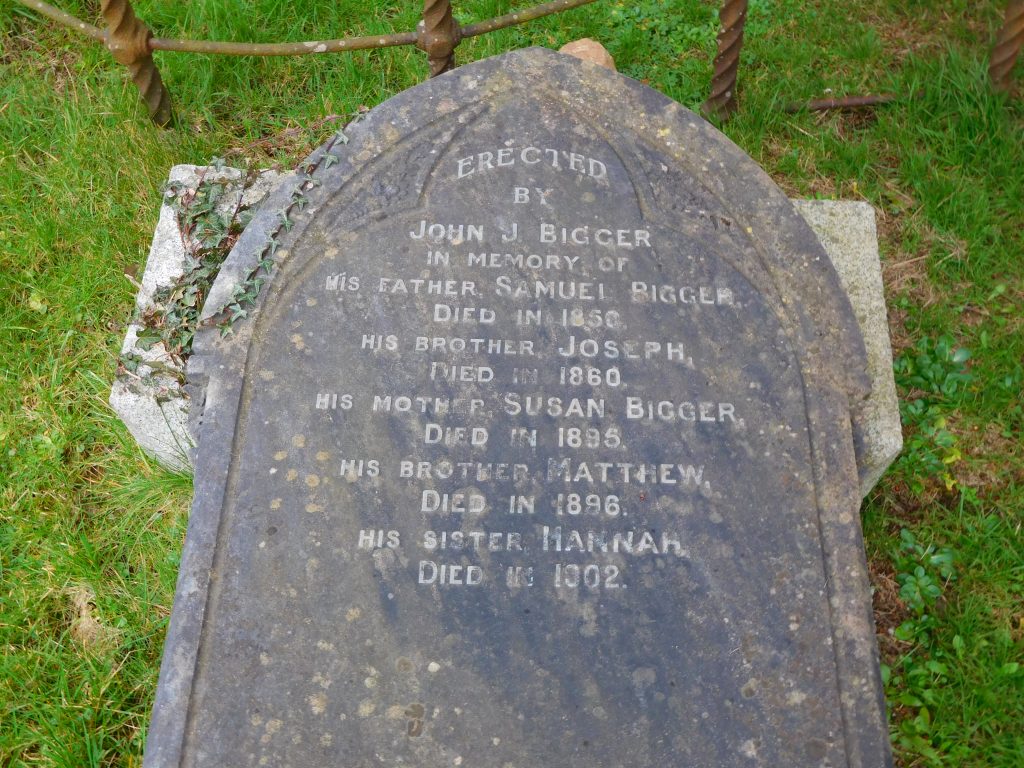 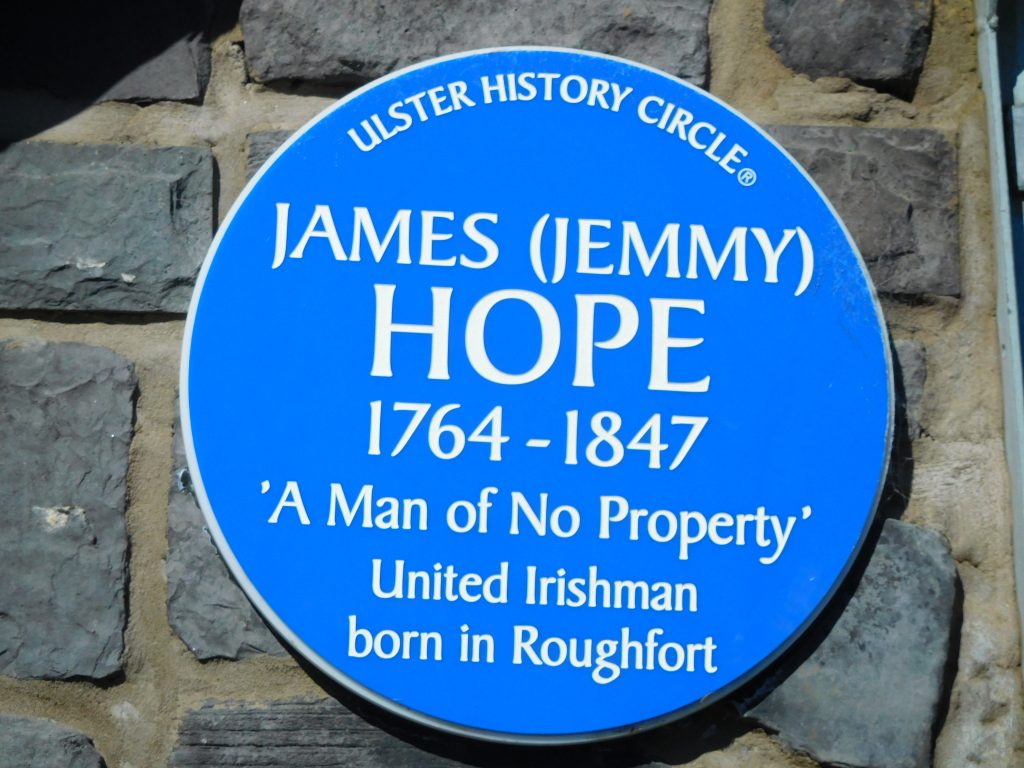 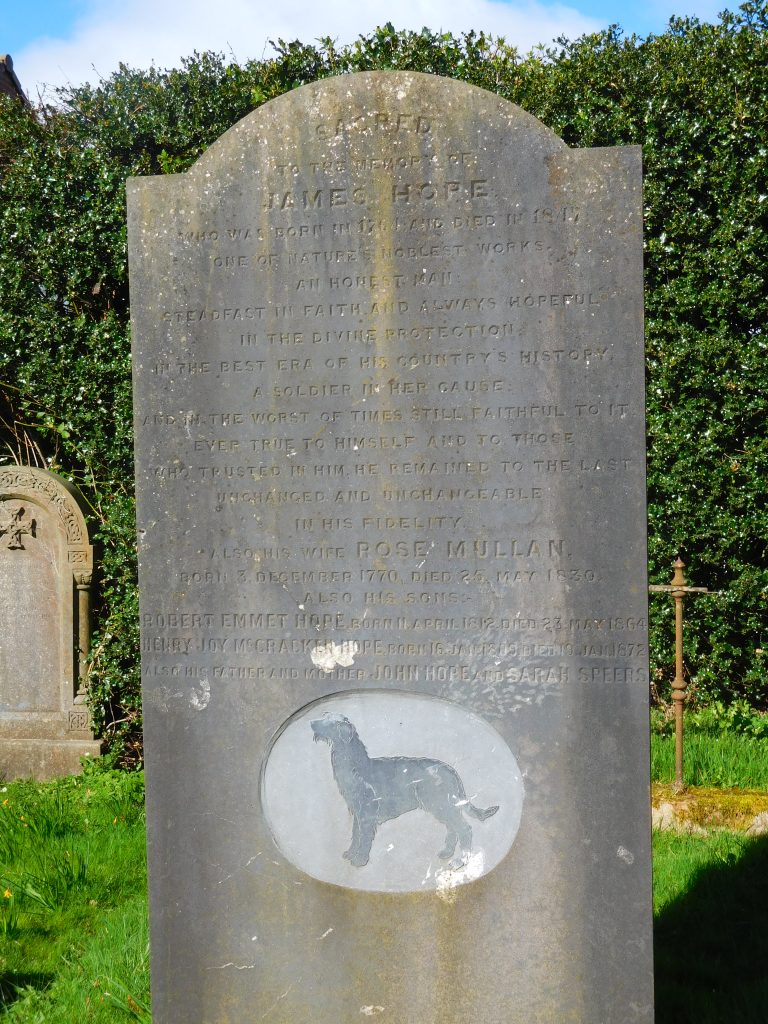 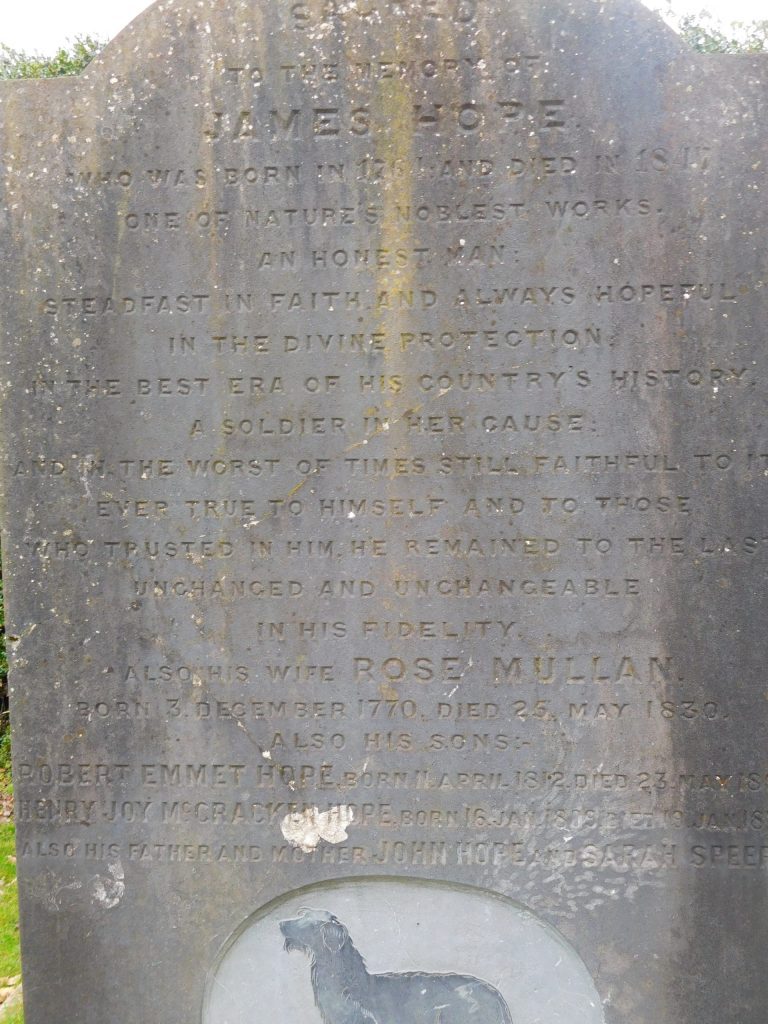 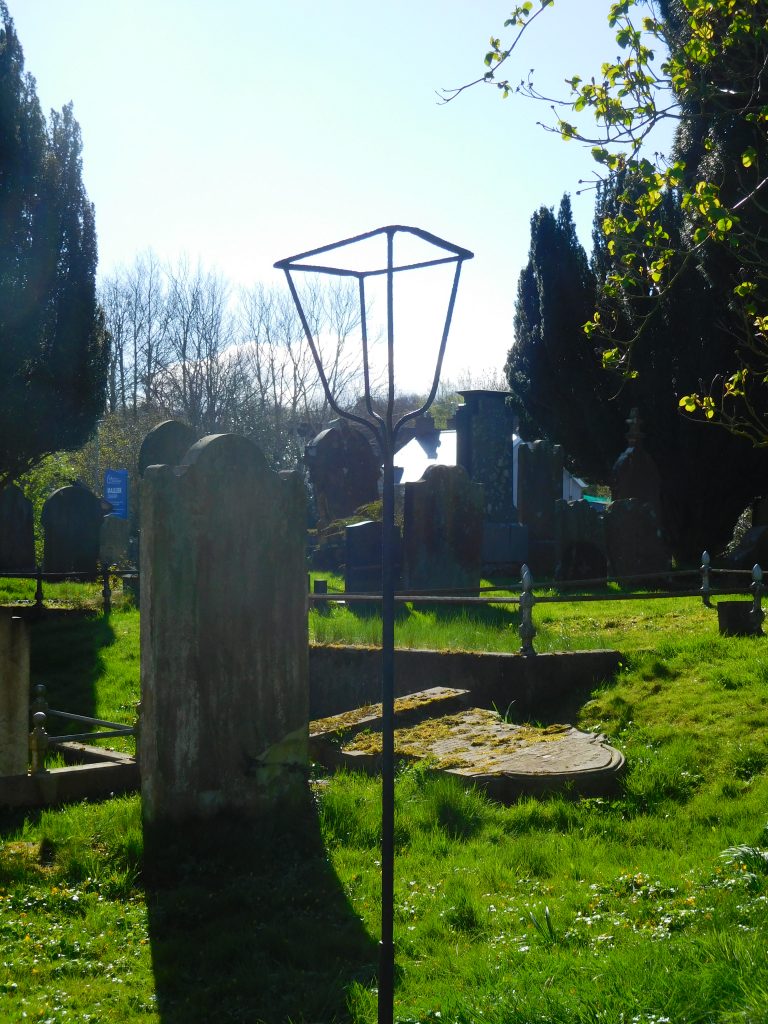 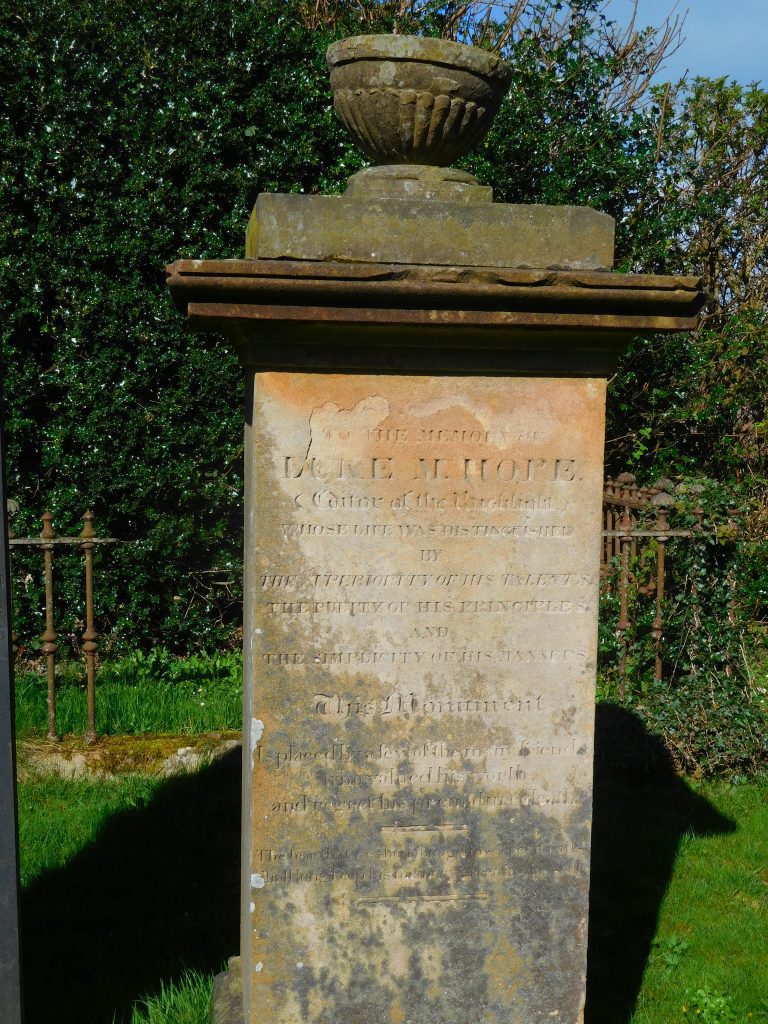 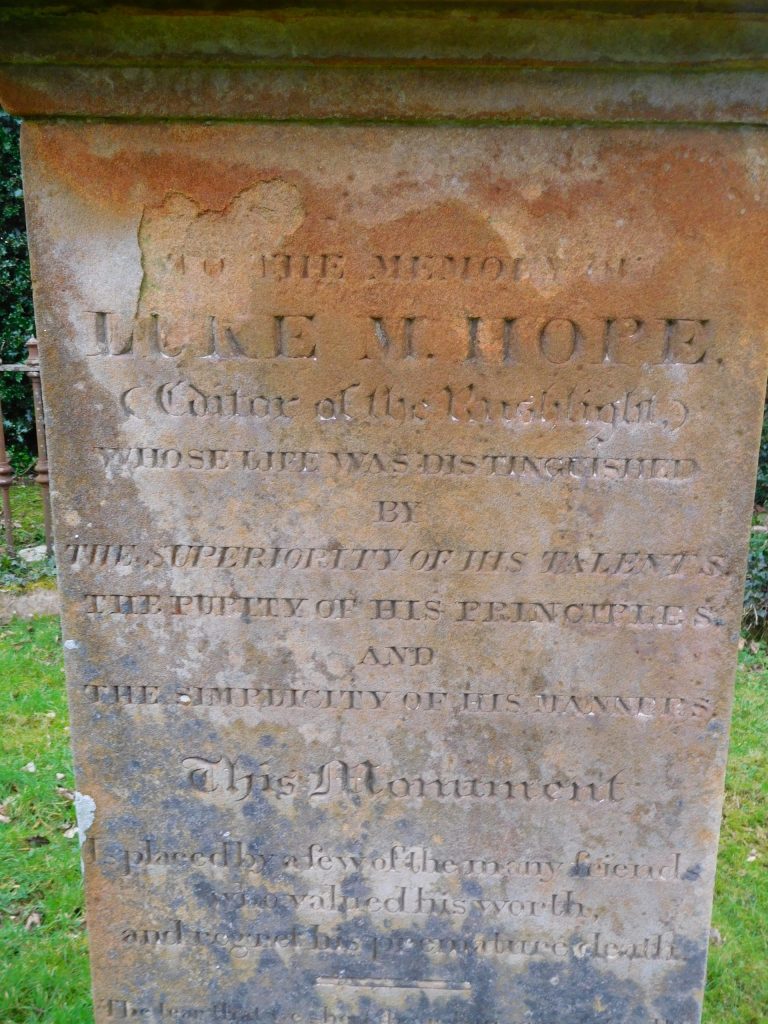 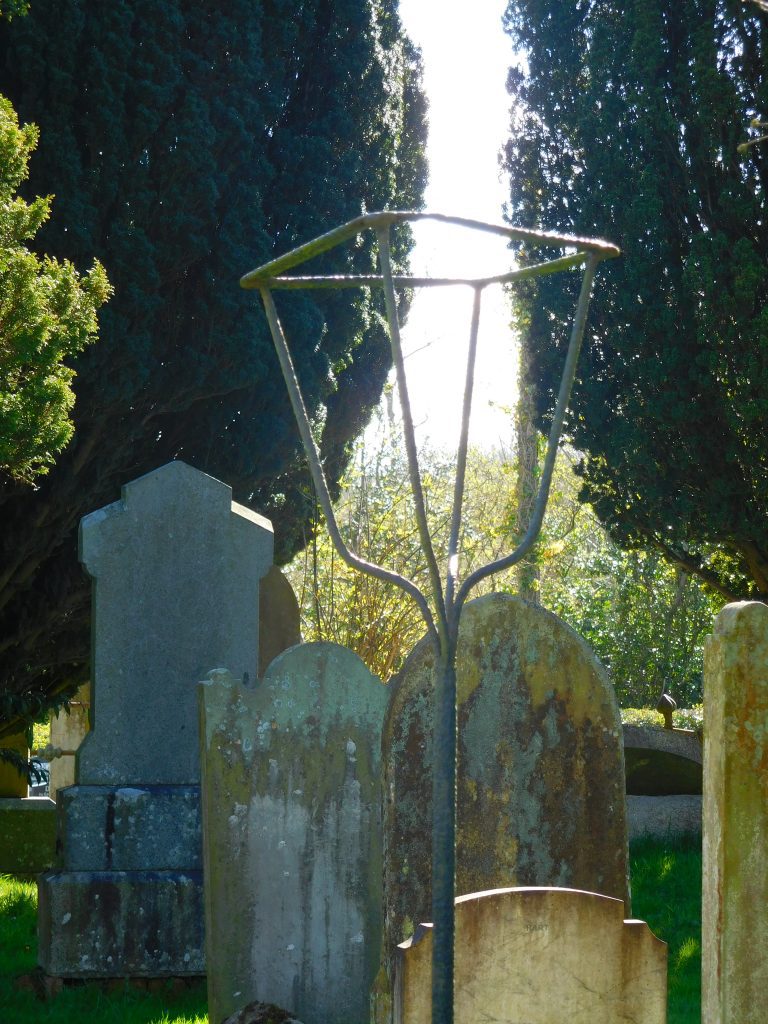 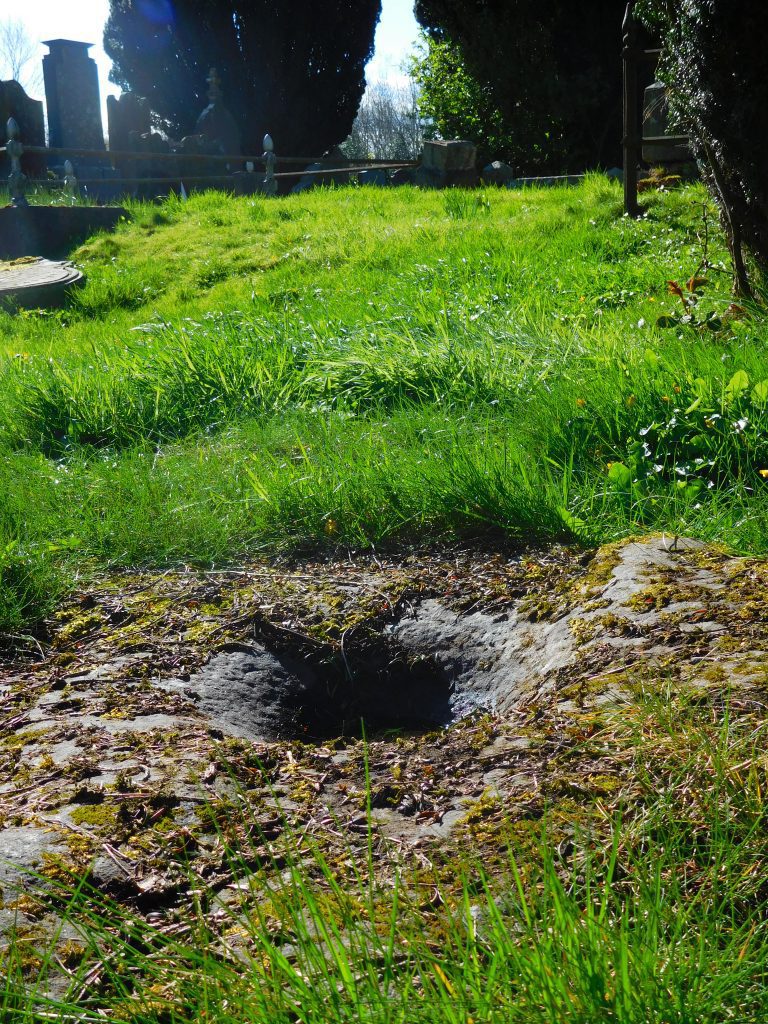 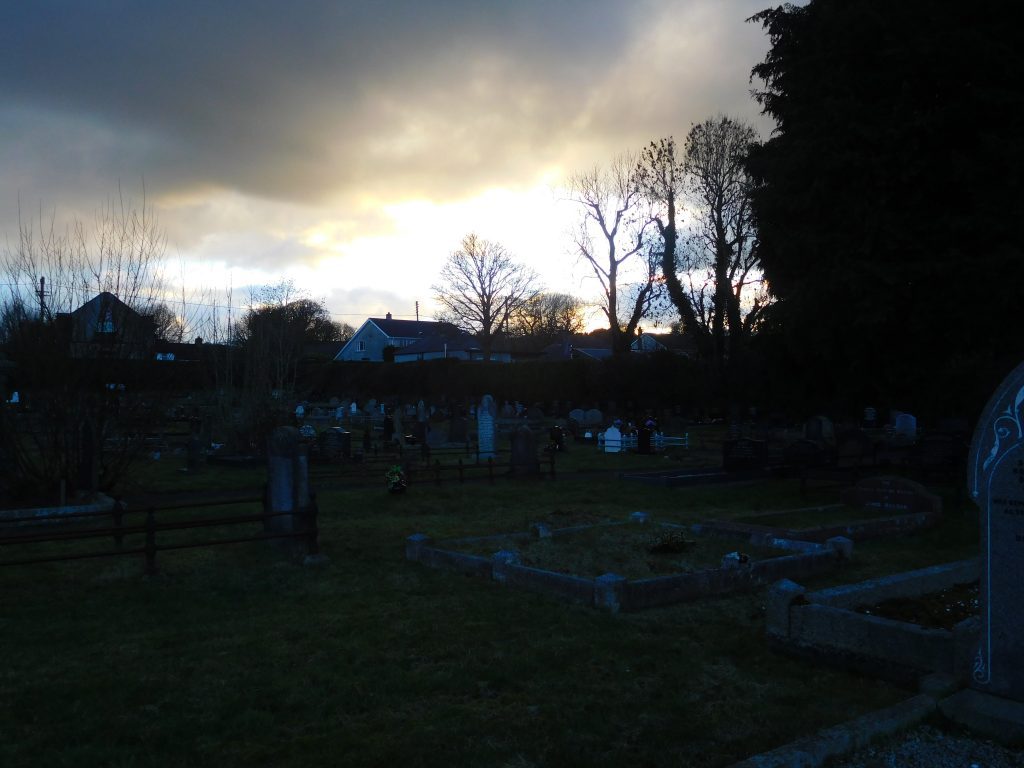 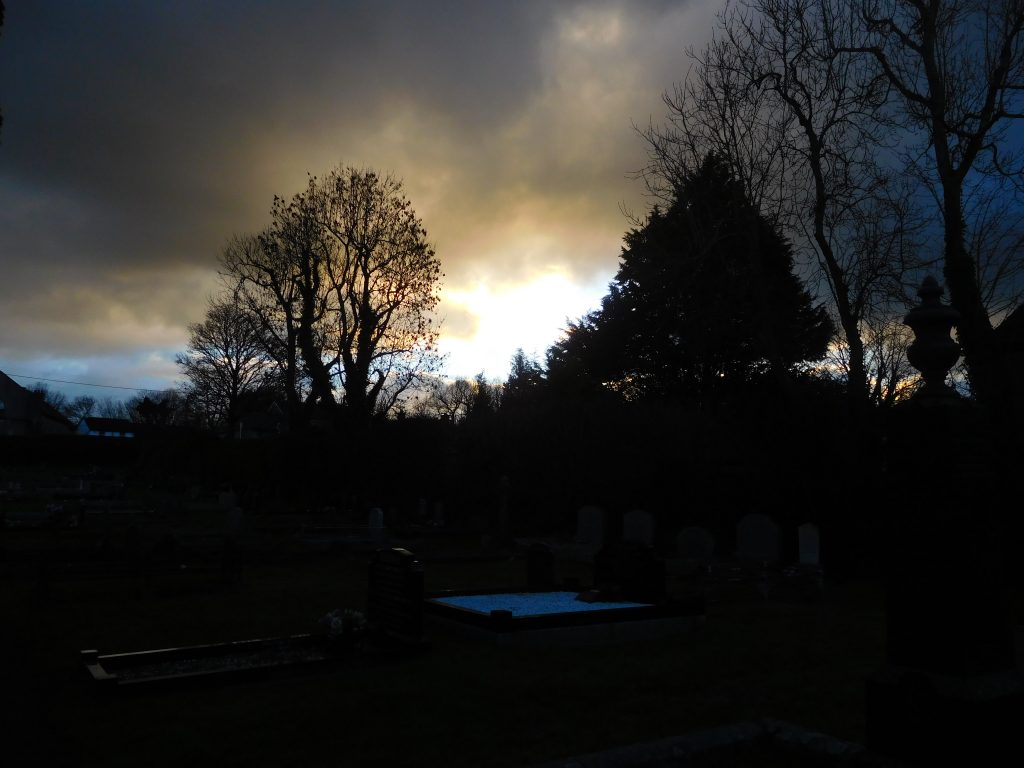 This little unassuming cemetery contains a wealth of history and information and is well worth a visit if in the area. The cemetery lies just at the junction where the Mallusk Road and Park Road meet. It is approximately 9 miles from Belfast.

Find it on Google maps

A tip on parking at Mallusk Cemetery.

The Entrance to the cemetery has room for 2 parked cars however these are effectively in a blind spot when re-emerging on to the Park Road due to the high walls either side. We’d suggest parking your car on the footpath across from the entrance with at least half the car on the footpath. This will support good visibility in parking and departing.