Where would you find an ancient burial site, a Norman motte and a Liberty Tree close together?

In the hamlet of Roughfort, 10 miles from Belfast and less than 3 miles from Templepatrick, these three historic sites can be seen within a few minutes walk of each other. One Cairngrania (Carngrany), is a passage grave from the Bronze Age. The motte is a Norman settlement probably from the twelfth century and the Liberty Tree was planted on the anniversary of the 1798 Rebellion.

In the townland of Craigarogan, meaning ‘O’Ruagain’s rock’ is the small village of Roughfort, situated on the Mallusk Road. In the 1600’s Scottish families were established in this area. This was in line with the English monarchy’s Plantation policy.

The native Irish Catholic villagers were evicted and their Church destroyed.

“A portion of the foundation of the church still remains in the old graveyard of Carngrany, at the west of the village of Roughfort, in the townland of Craigarogan. The church measured 50 feet by 24 feet, and its walls were a little more than two feet thick”

Rev James O’Laverty,  Historical Account of the Diocese of Down and Connor, 1884

In a field, in beautiful lush countryside is the wedge tomb of Cairngrania. Its name comes from the Gaelic Carn Greine meaning ‘cairn of the sun’. It is possible that as well as a grave monument it also served as a sacred site. Benn describes it as a druidical altar. Also the Ordinance Survey Memoirs of 1838 record that locals recall Cairngrania being enclosed within two stone circles. The outer ring of boulders measuring around 60ft in diameter.

Cairngrania consists of a dolmen-like ante-chamber at one end with a large capstone. Then a 9m long gallery of 9/10 chambers, which decrease in height.

“In a field at a short distance from the mail road to Antrim is Cairn Graine, a remarkably fine monument of antiquity; it consists of ten tabular stones, supported on upright pillars in the manner of a cromlech, but ranged in a straight line of 41ft in length, in a direction from north-east to south-west; the stone at the north-east extremity is rather low, and every succeeding one increases in elevation towards the south-west extremity, where the tabular stone is of very large dimensions and supported on five upright pillars”

In 1914 H C Lawlor with the aid of the Rev W P Carmody and Lieutenant J H C Lawlor commenced an archaeological dig at the site. An urn was recovered from the tomb which held traces of burnt human remains. This vessel was very fragile and broke into fragments; fortunately it was restored by Mr F W Cox of India Street, Belfast. The clay urn measures 13’’ in diameter and has a delicate criss-cross pattern around the rim. The urn and remains are now held by the Ulster Museum.

Historian George Benn noted that in earlier times an ancient brass bowl was uncovered at this location. However, it was so corroded that it fell to pieces and was beyond repair. There is also evidence of human cremations at the site without a burial container. 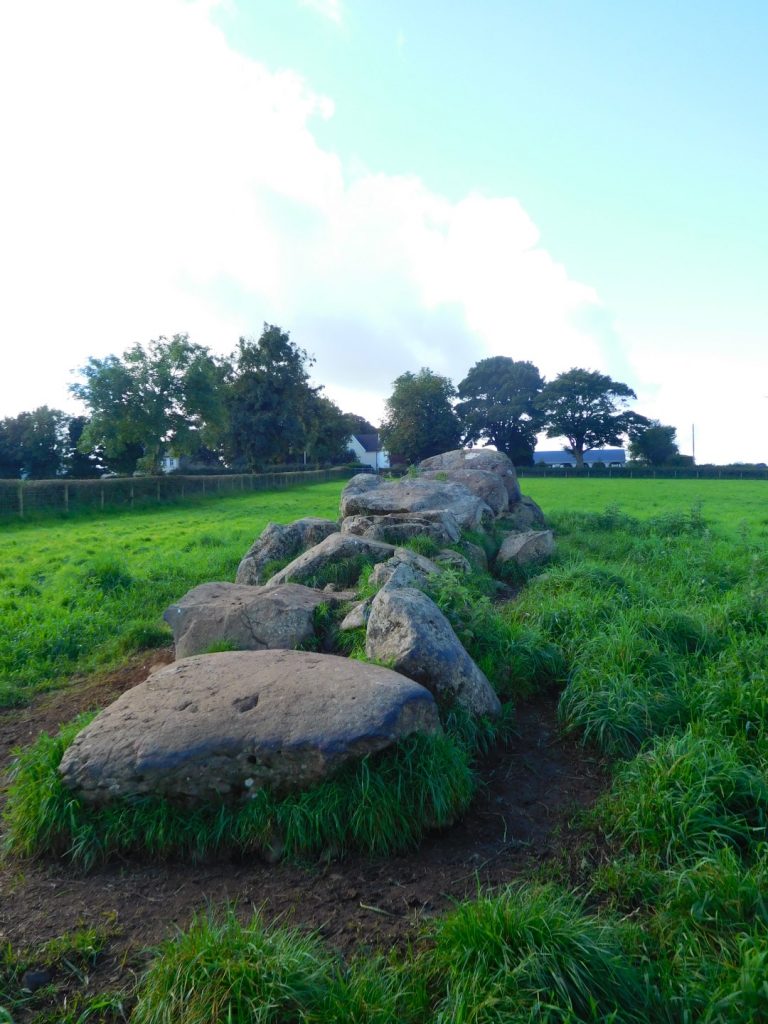 Around the corner is the motte, thought to have been constructed in the late twelfth century when the Anglo-Norman army invaded Ireland.

A motte is an artificially created mound, like a small hill, with a flat top. These would be surrounded by a deep ditch. A wooden castle would’ve been built on top to house the Norman occupants and defend and consolidate the seized lands. The wooden structure would later have been replaced by a stone fortification.

The castle would be enclosed within a wooden palisade with an outer fosse or trench. It also had a wooden look-out tower manned by skilled archers. Within the palisade smaller huts were constructed and livestock grazed.

Roughfort motte is one of a string of defensive forts built along the Ollar River (now known as Six Mile Water) by John de Courcy’s army.

“It is said that traces of ramparts have been remembered about it; but they have long since been removed. The mound is mostly composed of the light sandy soil thrown up from the ditch. In digging in it, for the purpose of removing the soil, several ornamental earthen urns were discovered in it, and hearths paved with stones were found on the summit”

Rev James O’Laverty, Historical Account of the Diocese of Down and Connor, 1884 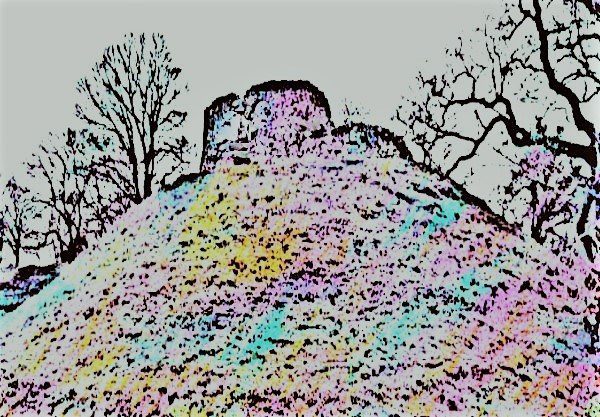 The motte also has a later significance for locals. It was on this motte that Henry Joy McCracken assembled the United Irishmen on 7th June 1798. Hundreds of untrained men armed only with pikes and staffs and their supporters met here before marching to Antrim. They were mostly Presbyterians from the surrounding areas of Ballyclare, Ballynure, Ballyeaston and Doagh.

The aim of the Society of United Irishmen, founded in 1791, was to remove religious sectarianism and British rule from the island and let all Irishmen be equal and self-governing. The forces of the United Irishmen were defeated at the Battle of Antrim. Many of the volunteers never saw Roughfort or its motte again.

One prominent United Irishman born in neighbouring Templepatrick, was James ‘Jemmy’ Hope. It is recorded that when labouring on an adjacent farm as a child he was read the great histories of the world, and this filled him with a zeal for education. A cotton weaver by trade, Jemmy developed a strong social conscience and an interest in local and international affairs. Further influenced by the American Revolution he enlisted in the Roughfort Volunteers.

“Educated to a degree much above that of the average workingman of that time, early in his life he turned to politics from social motives”

“preserve in endeavouring to form a brotherhood of affection among Irishmen of every religious persuasion….to obtain an equal, full and adequate representation of all the people of Ireland”

Jemmy Hope managed to evade capture after the Battle of Antrim. He refused to accept an amnesty in return for repudiating his republican ideals and remained true to his conscience. All his life he endeavoured to encourage social reform and promote unity among the workers.

“It was my settled opinion that the condition of the labouring class was the fundamental question and issue between the rulers and the people, and there could be no solid foundation for liberty, till measures were adopted that went to the root of the evil”

Jemmy Hope died in Brown Square off Millfield, Belfast in 1847 aged 83. He is buried in Mallusk Graveyard close to his birthplace in County Antrim.

The Liberty Tree at Roughfort

Opposite the Norman motte is the acclaimed Liberty Tree. This is said to have been planted to mark the first anniversary of the 1798 Rebellion. The idea of a liberty tree came from America. The first tree with this title is said to have been an elm in Boston, which became a meeting place for those opposed to British rule.

The tree also had a practical as well as a symbolic use. In the days before mass media and when newspapers were few and far between, notices and proclamations would be hung on the Liberty Tree. This was a public information service. Thus the local country folk could read the latest news or edict or have it read to them.

The idea of a living tree becoming the symbol of resistance in the pursuit of freedom became popular throughout America and in European countries such as Ireland.

In County Carlow to commemorate the bi-centenary of the Rebellion a sculpture of The Liberty Tree was unveiled on 13th June 1998. It is the work of Dublin artist John Behan. The the stem of the tree is made up of clambering skeletons in commemoration of the hundreds slain in the 1798 Rising.

Similarly, a stone monument dedicated to the United Irishmen’s attempted revolution can also be seen in Maynooth, County Kildare. It depicts The Tree of Liberty and is inscribed –

What is that in your hand?

It is a branch.

Of the tree of liberty.

Where did it first grow?

Where does it bloom?

Where did the seeds fall?

Mallusk Burying Ground is another old cemetery with a few tales to tell – featuring a wealth of history and information.