Saint Mary’s was the the first Catholic Church built in Belfast, in 1784, at the end of the Penal era . Understanding the huge significance of this event requires an appreciation of the historical circumstances of the era and recognition of the strength of ecumenical support needed to see the church built.

The Penal laws were imposed on 17th century Ireland (then a single country) to force Irish Catholics and Protestant dissenters to accept the established Church of Ireland. The laws enabled a wide range of provisions to penalise those Catholics/ dissenters refusing the surrender their beliefs:

“a machine of wise and elaborate contrivance, as well fitted for the oppression, impoverishment and degradation of a people, and the debasement in them of human nature itself, as ever proceeded from the perverted ingenuity of man.”

During Penal times the law forbade Catholics from practicing their religion. Nevertheless, Mass and Catholic teaching continued ‘under the radar’ in places like “mass rocks” and “hedge schools“. These were exactly as the names suggest – clandestine locations for religious services and education, usually in isolated or country locations. People in the Belfast district for example met clandestinely at Friar’s Bush.

By the mid eighteenth century more Catholics were coming to live in the town as employment opportunities increased. In 1757 there were 556 Catholics out of a total population of 8,549 but numbers were steadily growing. As a result Fr O’Donnell covertly rented a shabby house in a back alley in Mill Street to provide services for an expanding congregation.

The Winds of Change

The latter half of the eighteenth century was to see the emergence of new liberal thought and ideas, and not only in Ireland. In July 1776 Britain’s American colonies declared independence.  In 1778, the American naval commander John Paul Jones (famous in the United States as the ‘Father of the American Navy’) entered Belfast Lough and engaged in battle with HMS Drake, a 20 gun sloop, near Carrickfergus. Although the vessels were evenly matched, Captain Burden of The Drake was killed and his second-in-command Lieutenant Dobbs was mortally wounded. The Drake surrendered and John Paul Jones departed in victory.

News of the battle caused fear to spread throughout the North of Ireland. With British forces occupied across the Atlantic, local landowners had to organise their own protection. This led to the rise of the Irish Volunteers. By the end of 1778 this patriot force numbered 30,000. The strength of this grassroots Protestant movement ‘persuaded’ the English government to grant Ireland free trade and parliamentary independence. This success led to the reopening of ‘The Catholic Question‘ and The Penal Laws.

End of the Penal Era

In Ireland, the Penal Laws excluded Catholics and Presbyterians, who together made up a large majority of the Irish population, from public life . Henry Grattan, the Anglican Leader of the Patriot Party opposition in Parliament, proclaimed that “….the Irish Protestant could never be free until the Irish Catholic ceased to be a slave”.

The English, now more concerned than ever due to France and Spain supporting the American colonists, began to issue a series of Acts to relax the Penal Laws. Although there were still some restrictions and caveats, priests were now allowed openly in the town and permitted to say Mass. Catholics could act as teachers for Catholic children and Catholics were now allowed to lease land or property for more than the previously stipulated 31 years. This would not have been achieved without the enlightenment and ecumenical spirit of Grattan and the Irish Volunteers!

On the 15th February 1782 in Dungannon, the Ulster Corps of the Volunteers passed a resolution:

…that we hold the right of private judgement in matters of religion to be equally sacred as in ourselves; that as men and as Irishmen, as Christians and as Protestants, we rejoice in the relaxation of the penal laws against our Roman Catholic fellow-subjects, and that we conceive the measure to be fraught with the happiest of consequences to the union and prosperity of the inhabitants of Ireland”

Two months after the Dungannon Convention, a group of Catholics leased a gateway and house in Belfast’s Crooked Lane (now Chapel Lane) “in trust for the congregation of Roman Catholics” at a rental of £4.11s per annum.

This became the site of St Mary’s Church – the first Catholic Church in Belfast. On Sunday 30th May 1784, Fr Hugh O’Donnell celebrated the first mass in the new church. The Irish Volunteers formed a guard of honour outside the church, led by Captain Waddell Cunningham. Many of these non-Catholic citizen-soldiers joined the congregation for the ceremony.

The most liberal display of cordiality and affection was exhibited by the inhabitants on the occasion and particularly the Volunteer Companies… It is conduct like this which will render the people of Ireland invincible, appal our base enslavers, confirm our freedom and secure the happiness of ages yet to come

The Roman Catholic congregation of Belfast return their grateful acknowledgments to the Belfast First Volunteers, to the Belfast Volunteer Company and to the inhabitants at large for their so generously enabling them to erect a handsome edifice for the celebration of their divine worship

Fr O’Donnell, Priest at the Opening of St Mary’s Church

The new church building had a light facade with two wings topped with crosses that jutted out on either side. There were four arched windows and three rectangular windows at the front.  A large cross patee was sculpted at the centre of the front façade. Saint Mary’s Church was set back from the street.  Another sign of religious friendship was the fact that the Rev William Bristow, donated the pulpit from the demolished Corporation Church.

The Volunteers continued in their support of religious freedoms. After a parade on 14th July 1791 to commemorate the French Revolution, one of the toasts met with resounding cheers and applause “An abolition of Popery Laws and an extension of privileges to Roman Catholics”. Inspirational times…

Hugh O’Donnell was born in 1739 near Glenarm, the son of Roger O’Donnell, a farmer. He was educated by a Franciscan priest at a hedge school in the Glens of Antrim. As a young man he travelled to Salamanca in Spain to train for the priesthood. Defying the law and returning to Ireland after his ordination, he was appointed as curate to Derriaghy, outside Belfast.

With the construction of St Mary’s Church, Fr O’Donnell was able to continue his pastoral work in a more public setting. At the first meeting of the Catholics of Belfast, he announced his support for the aims of the recently formed United Irishmen “our worthy Protestant brethren of Ulster, who have lately so distinguished themselves by forming the societies of the United Irishmen”. He never however, advocated rebellion or violence.

Fr O’Donnell was one of the first members of the Linenhall Library and took an active part in the intellectual life of the town. In the early nineteenth century he petitioned and received a lease of land from the Marquis of Donegall for a second Catholic Church. St Mary’s had already become too small for a congregation now numbering 4,000. This church was the original St Patrick’s on Donegall Street.

In 1812 Fr O’Donnell resigned his parish and spent his last years with his sister and niece at Springbank. On 1st January 1814 he passed away. His funeral, attended by hundreds of all denominations was held in his beloved St Mary’s. Crowds lined the streets of Belfast as the cortege passed by.  Fr O’Donnell is buried in his family plot at Glenarm.

The parish of St Mary’s continued to thrive and grow. Two more churches were built, St Peter’s and St Malachy’s to meet the spiritual needs of the expanding Catholic population. In 1861, 41,237 Catholics are recorded in the city of Belfast. It was necessary therefore to enlarge the original St Mary’s building.

The architect John O’Neill was employed to redesign the Church and the builder John O’Connor Jr to complete the construction. The wings were demolished and a tower added (now removed) and the Church was extended to the pavement of Chapel Lane.  The red brick facade now boasts a huge rose window and the interior is adorned with colourful mosaics and a high altar of Caen stone.

In 1954 to commemorate the Marian year a grotto to Our Lady of Lourdes was built in the Church grounds designed by Padraic Gregory. Devotions at the site have become an integral part of parish life.

The Church of St Mary’s, ‘Catholic Belfast’s Mother Church’ continues to play an important role in Belfast. Despite fewer people residing in the city centre due to changing demographics, St Mary’s Church serves as a place of quiet and contemplation for many workers and shoppers. It has been described as a ‘haven of rest and prayer in the midst of this bustling city’. St Mary’s celebrates Mass twice daily, with the 6pm Mass on Friday and Saturday held in Irish.

The grotto has also become famous for its ‘living’ nativity scene at Christmas, complete with sheep, goats, donkeys and the occasional alpaca! 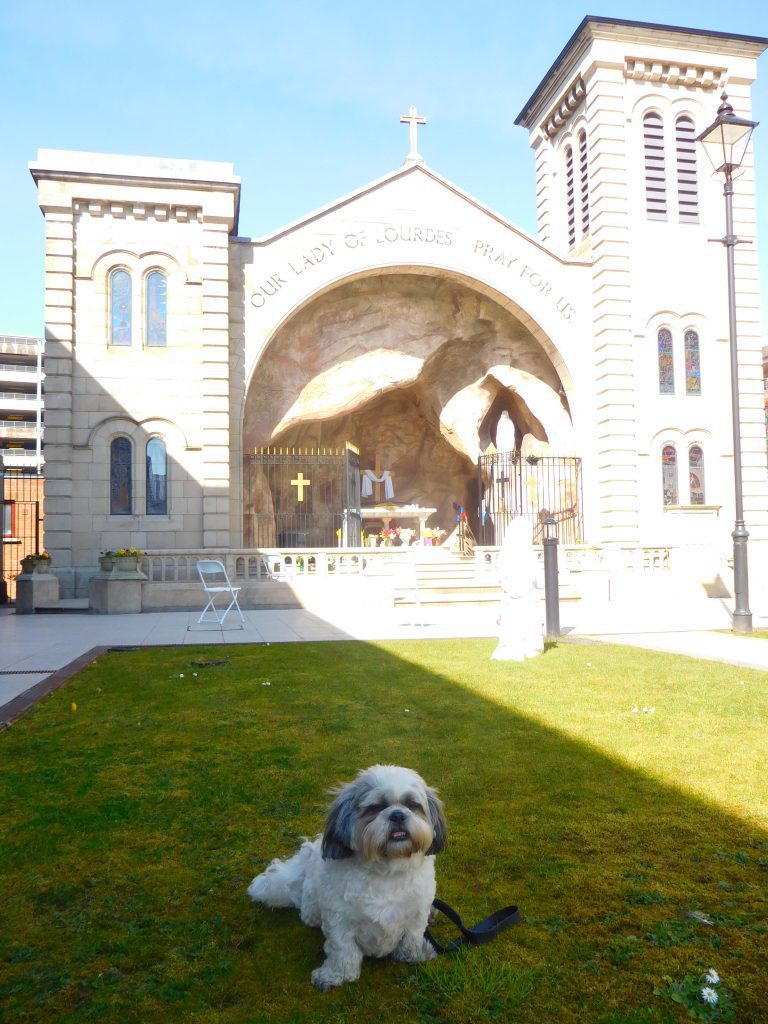 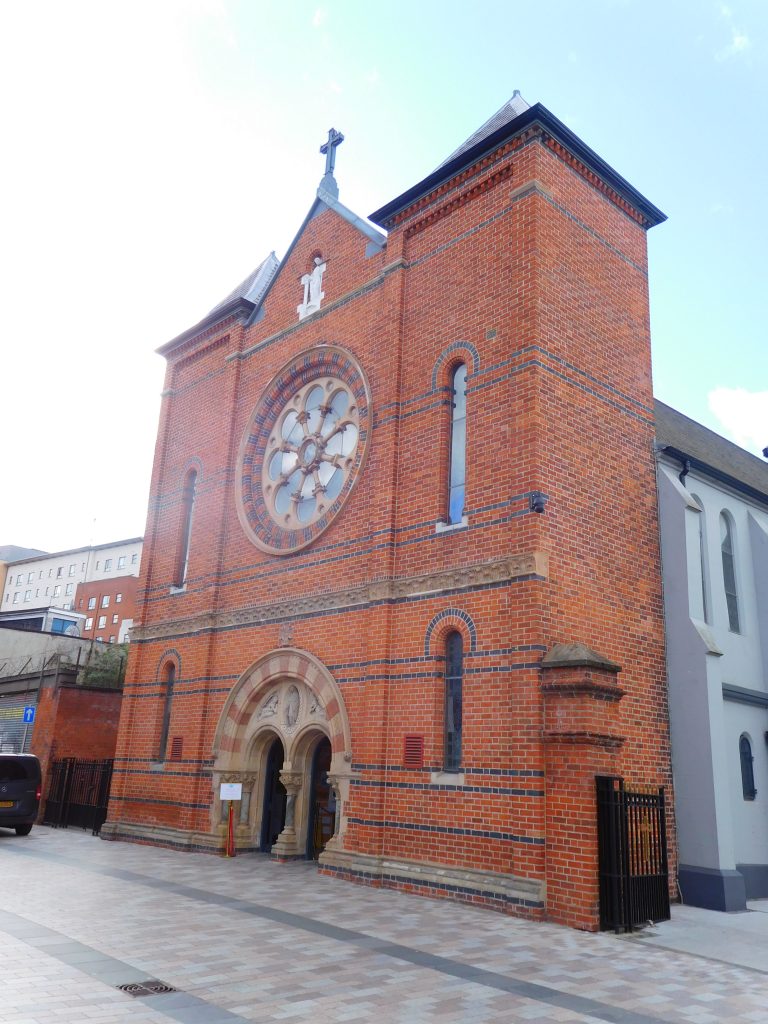 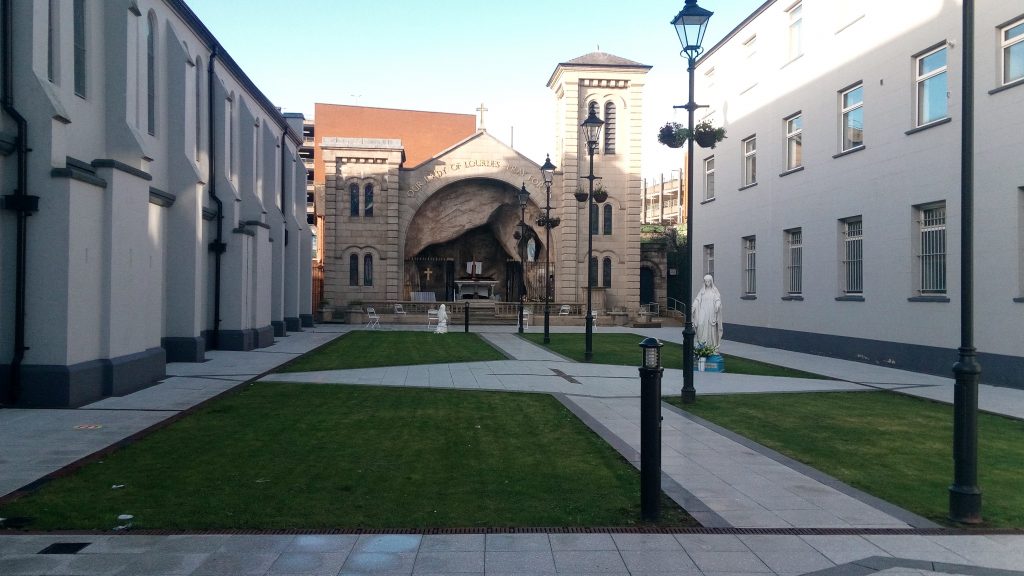 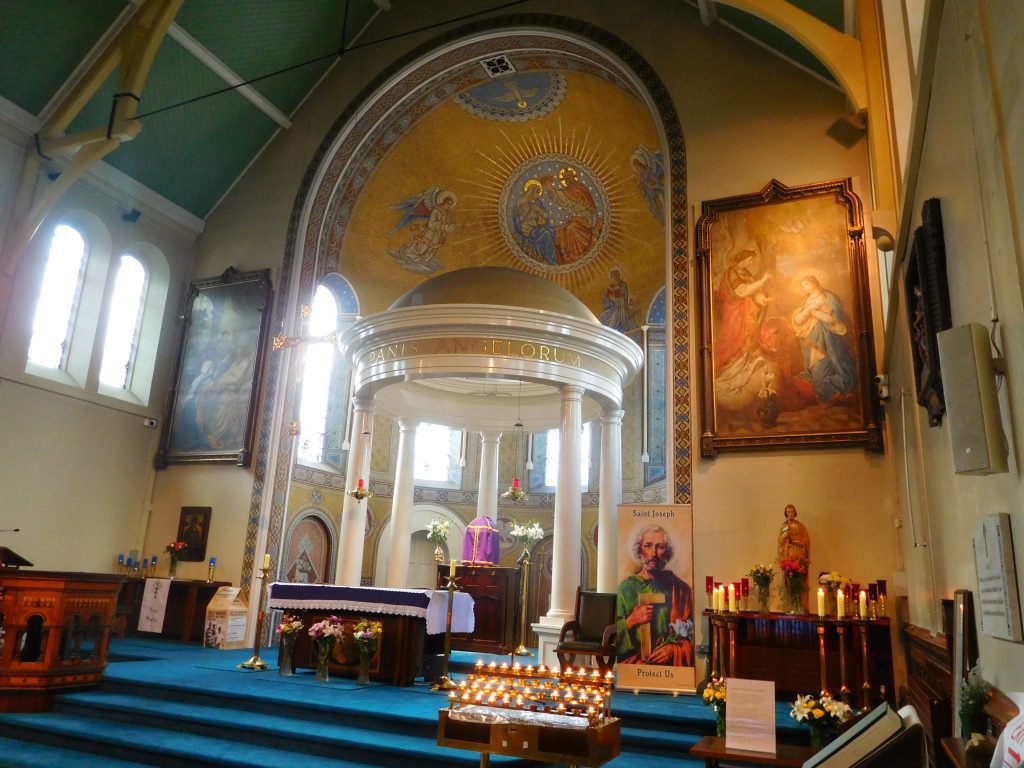 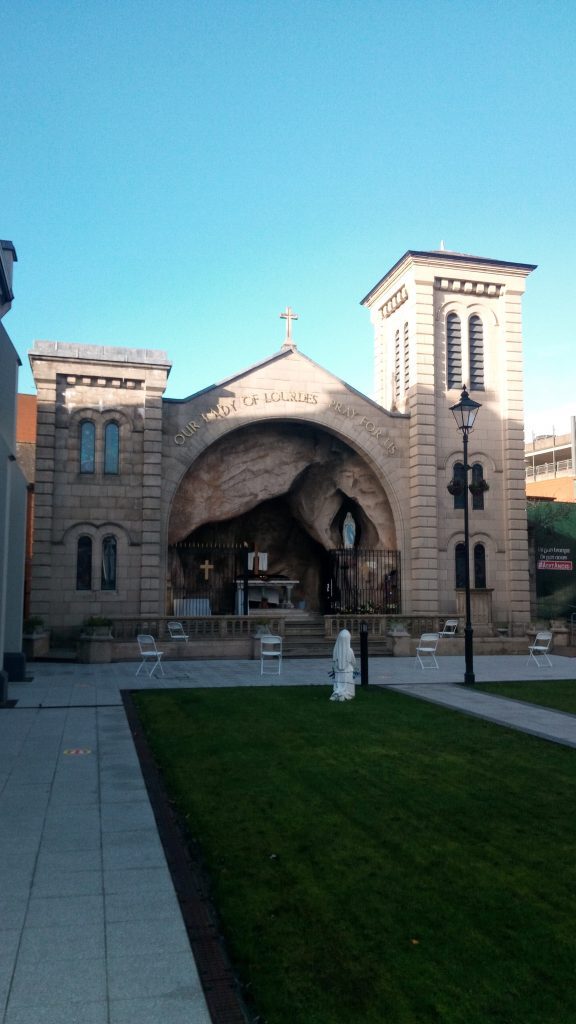 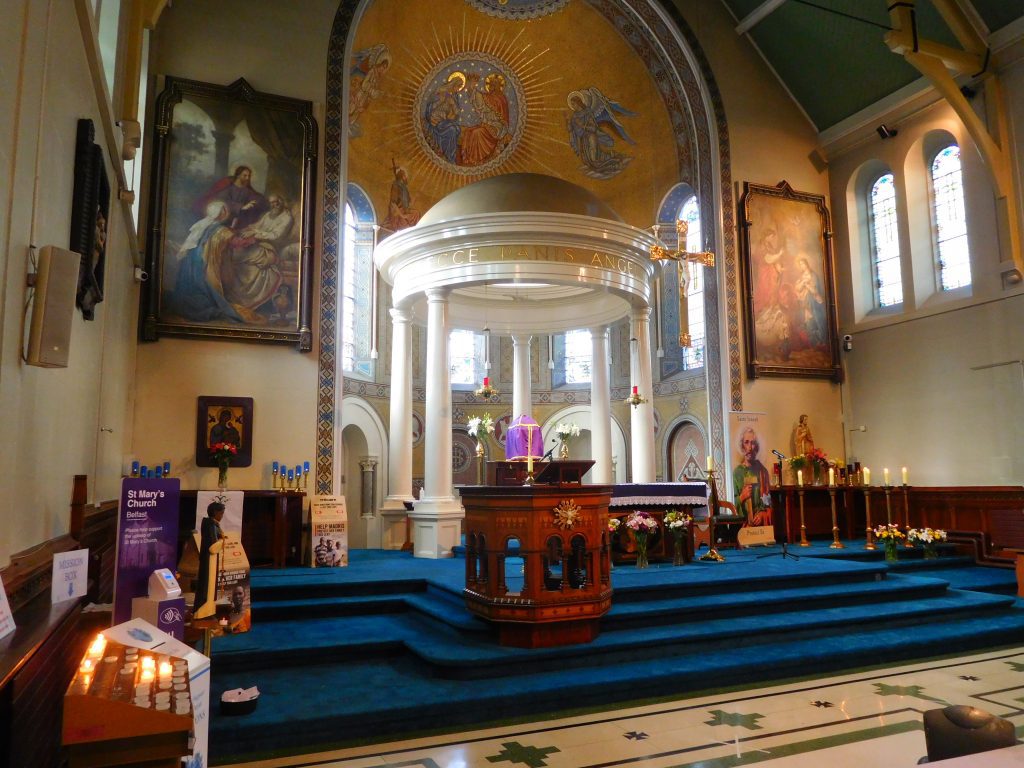 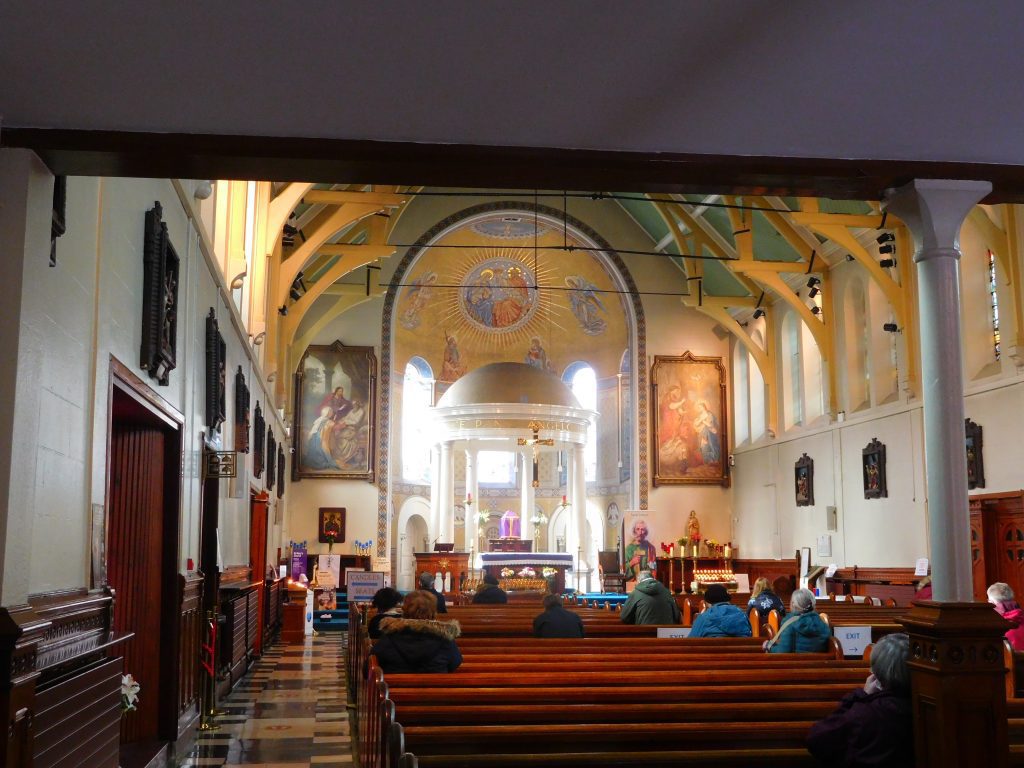 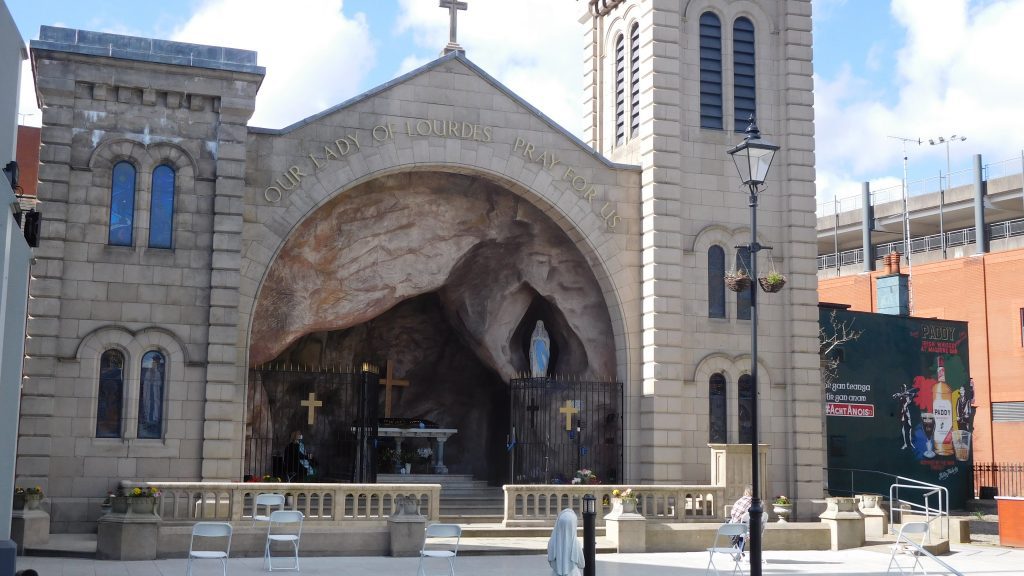 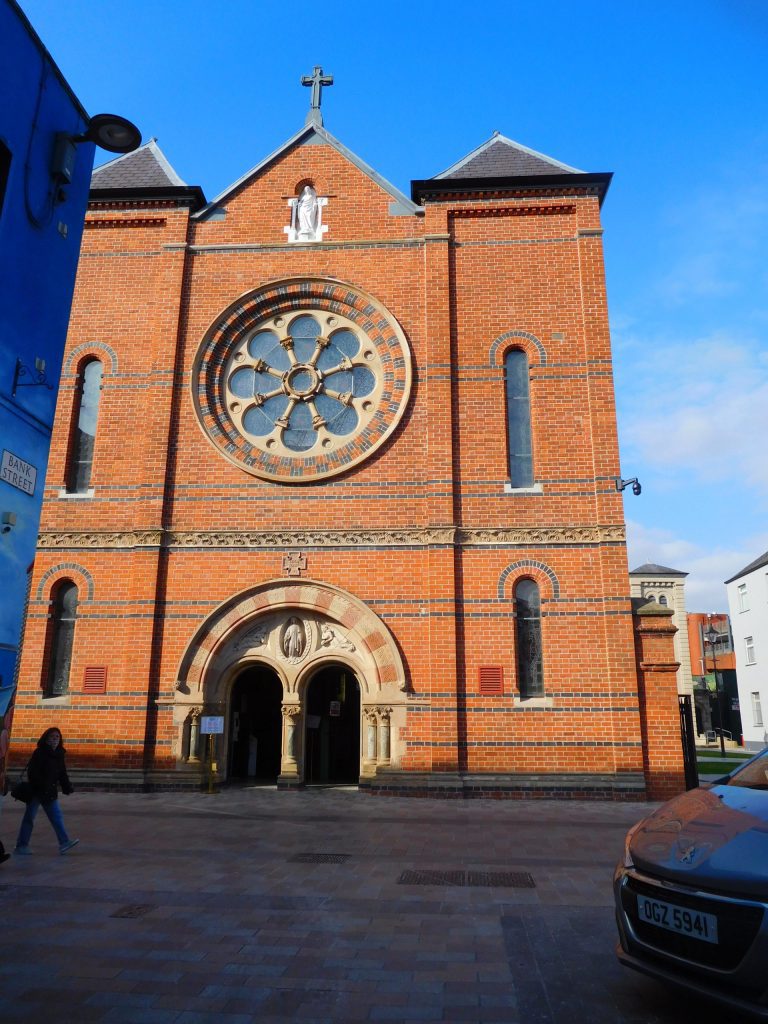 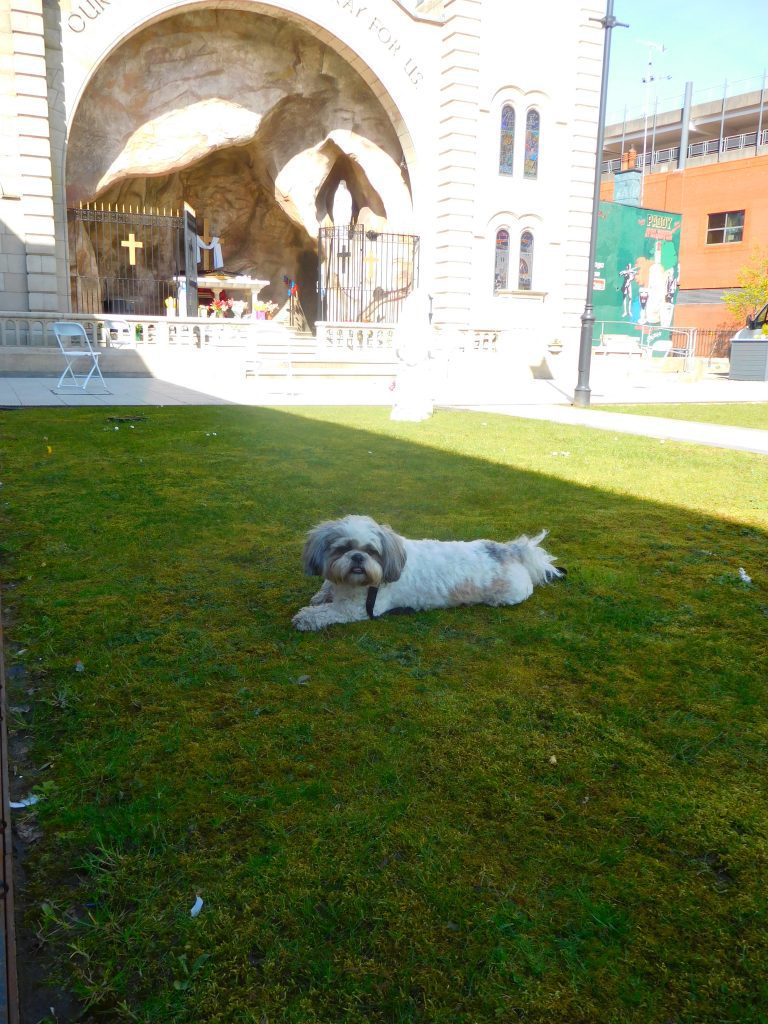 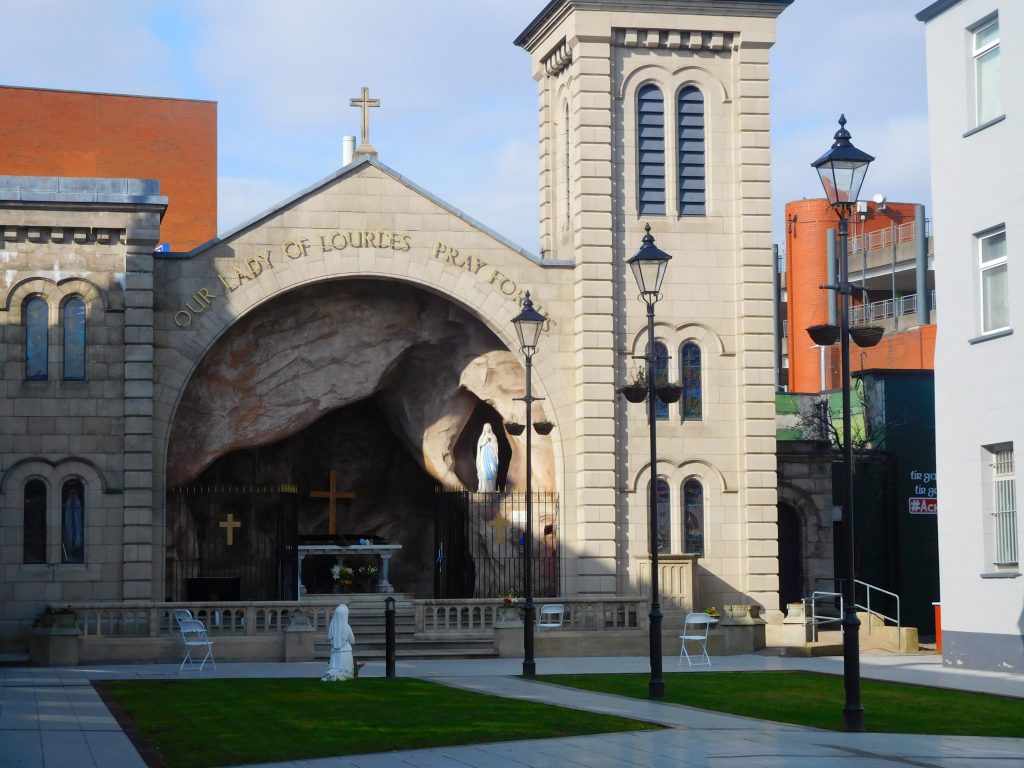