By the late 1600’s Belfast had two sugar refineries. One was in Rosemary Lane (now street) and the other in an entry off High Street, which subsequently became known as Sugarhouse Entry.

The prosperous merchant and businessman, George McCartney, owned the Sugarhouse Entry refinery and in 1678 also leased the adjacent Wilkins tenement to extend his premises.

McCartney also had a successful political career, being appointed one of the Sovereigns of Belfast, First Citizen and Chief Magistrate. On his death in 1683 his sons Arthur and Chichester McCartney inherited the business.

“I leave and bequeath to my sons Arthur and Chichester all that my moiety of all materials of the Sugar House in Belfast, and all other utensils thereof…..together also with the House and land in Belfast commonly called Wilkin’s tenement on which I lately built an addition or enlargement of the said Sugar House”

George McCartney, Extract from Will 1683

In 1704 the original building was rebuilt and was known as the New Sugarhouse. This was destroyed by fire on 17th November 1785. It was replaced by the Sugarhouse Company which continued until 1810.

According to Benn in his History of Belfast (1823) 60 tons of raw or brown sugar and 2 tons of white sugar were imported into Belfast in 1683. By 1700, 10,000 tons of sugar was being imported into Britain and Ireland every year. Sugar was considered a luxury item which only the wealthy could afford.

Cathal O’Byrne in his book As I Roved Out [(946) recounts a tale which shows how businesses could be damaged by rumour-spreading – the ‘social media’ of those days. The Belfast streets were buzzing with the gossip that some poor unfortunate employee had fallen into a vat of sugar and been boiled alive. To make matters even worse the sugar had then been processed and sold as normal!

The Sugarhouse Company was forced to offer a reward of 50 guineas to anyone revealing the identity of the person spreading the false rumour. The reward was never claimed and the gossip dried up.

Belfast at this time was already seen as the centre of radicalism in Ireland and the clients of this inn had a reputation for liberal thinking. James Barclay himself was arrested in 1796 for high treason due to his “advanced political opinions” (as told by Cathal O’Byrne). Fortunately he was released.

“Sweet Peggy, I well remember thy cheery face set off to best advantage by the cap of widowhood….What a house was Peggy’s in the Entry, for there was plenty of accommodation for all who came. Some 20 or 30 rooms supplied the necessary space; the fertile oyster beds of Carrick and Comber supplied the dainties; and in all Ireland there was no better rum to be found than that hidden in Peggy’s cellar”

Sugarhouse Entry and the United Irishmen

An upstairs room in the Dr Franklin Tavern was the meeting place of the United Irishmen, now forced undercover. The United Irishmen had formed in 1791 with the aim of uniting Catholic, Protestant and Dissenter and removing English rule over Ireland. They called themselves The Muddler’s Club to divert suspicion.

“The ostensible business was jovial amusement, its real one extending the connection of the Society of United Irishmen, and it was visited by every man of known integrity who came on business to town; and if any of the members could not attend, it was always known where they were to be found in case of necessity”

The Muddler’s Club was forced to dissolve in 1796, when information was given against them. The paid informant was Belle (Isabella) Martin, a serving girl in the tavern.

“a handsome face….which exposed her to temptations, to resist which she proved deficient, either in wisdom, or in will”

Martin passed on any potentially seditious conversations she overheard in the inn. She also frequented the Blaris army camp near Lisburn. Using her charms she persuaded smitten soldiers to join the United Irishmen, and then had them arrested.

At the County Antrim Spring Assizes of 1797 her work resulted in the execution for treason of four young Monaghan Militiamen– William and Owen McCanna, Peter McCarron and Daniel Gillen.

As a result of Martin’s dishonourable activities several members of the Muddler’s Club were captured. Belle, who was reputed to be the mistress of Lord Castlereagh, was swiftly moved out of the city. Still on the payroll she was established in Dublin and continued her unsavoury career spying on suspected United Irishmen.

The members of the secret society were compelled to meet elsewhere, one such location being the Thatched House Tavern in Waring Street. Peggy Barclay moved from Sugarhouse Entry also due to harassment by the local authorities. She set up a new hostelry on the Shore Road at the corner of Buttermilk Loney (now Skegoneill Ave). This establishment had the unusual name of The Mill for Grinding Old People Young.

A sign depicting elderly people on sticks throwing themselves into the hopper of a mill and jumping out the other side young and vigorous, apparently hung at the front of the building. Peggy herself died in 1810.

A further sad connection between Henry Joy McCracken, one of the leaders of the United Irishmen, and Sugarhouse Entry occurred on 17th July 1798. Immediately after his public execution on the scaffold in Cornmarket, his friends brought his body to the Entry where his sister Mary Ann had a doctor waiting. She had the desperate hope that perhaps he could be revived, but it was not to be.

Sugarhouse Entry through the years that followed

The Dr Franklin Tavern subsequently has a succession of owners Tibbold Haylock, William Falloon, and Mr J Prey. In 1817 the pub was known as Nugent’s Den, after an army officer who was famed for frequenting it.

The inn was notorious for ‘raucousness and ribaldry’. Indeed an order was passed that year that “…no ladies should be carried in a sedan chair in Sugarhouse Entry after midnight”. This was only rescinded when the Borough Police had their powers extended.

1839 Abraham Bambridge purchased the building and it became the Bambridge Hotel. The hotel survived for many years, later being managed by the McGlade family. It was renowned for its billiards and oysters. 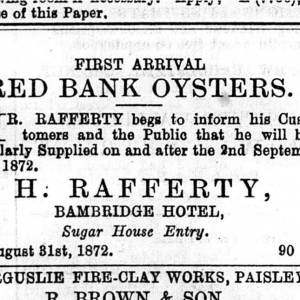 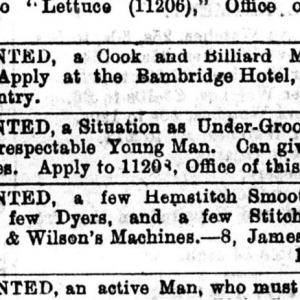 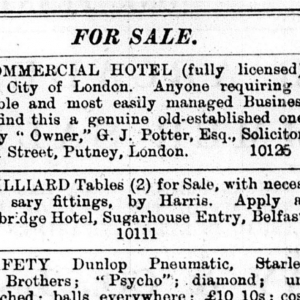 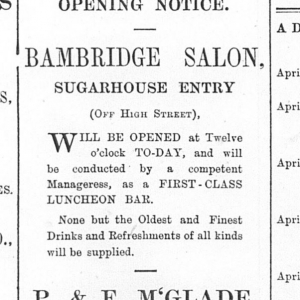 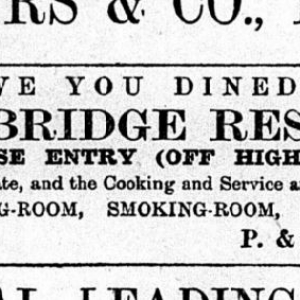 The Fate of Sugarhouse Entry

The buildings of Sugarhouse Entry were destroyed in the Blitz of 1941, when Luftwaffe bombs obliterated much of old Belfast. The historic buildings in the entry were reduced to a pile of rubble.

“….but Hitler’s bombs demolished those narrow ways of song and story. Most precious of them, and sorely missed by me, is Sugarhouse Entry, reminder of one of Belfast’s lost industries, where Peggy Barclay kept a merry tavern. Here Henry Joy McCracken and his fellows held their famous meetings of the innocent-sounding but fate-laden Muddler’s Club, ostensibly an organisation for social intercourse, but actually the nerve-centre of the counter-espionage activities of the Society of United Irishmen”

Richard Hayward, Belfast Through the Ages, 1952

Today Sugarhouse Entry, which runs parallel to Bridge Street, from High Street to Waring Street, is inaccessible. It was closed off in 1972 for security reasons due to its proximity to the towering government building, River House. It has never been reopened.

One can’t help but wonder what stories those old cobbles could tell! 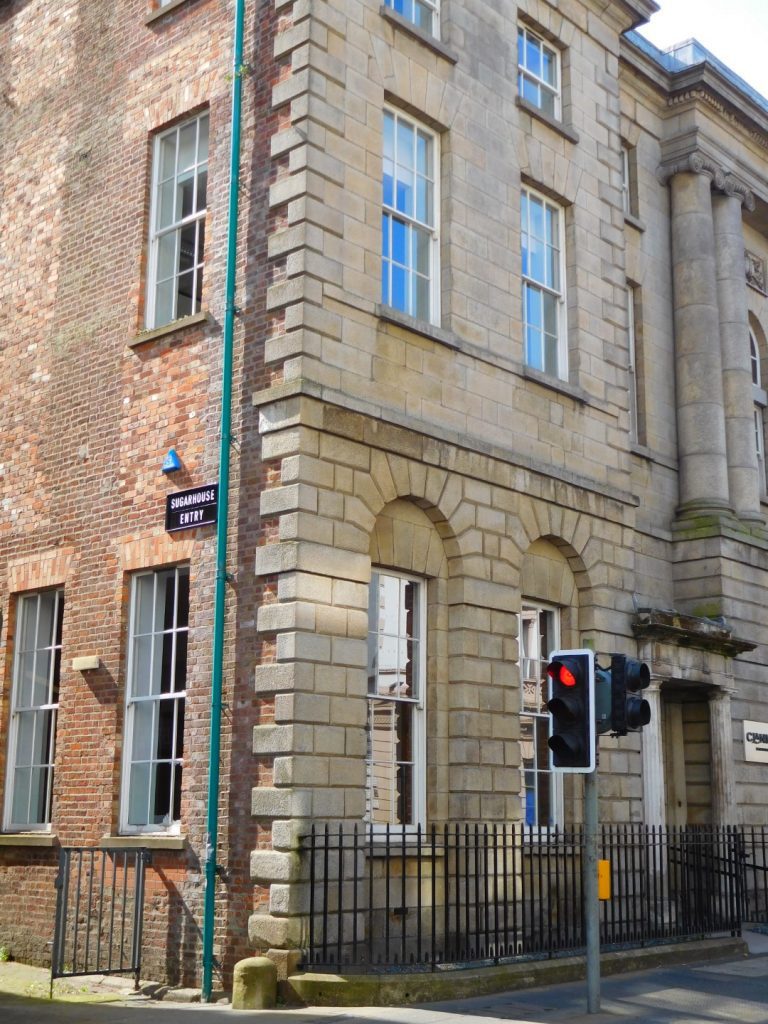 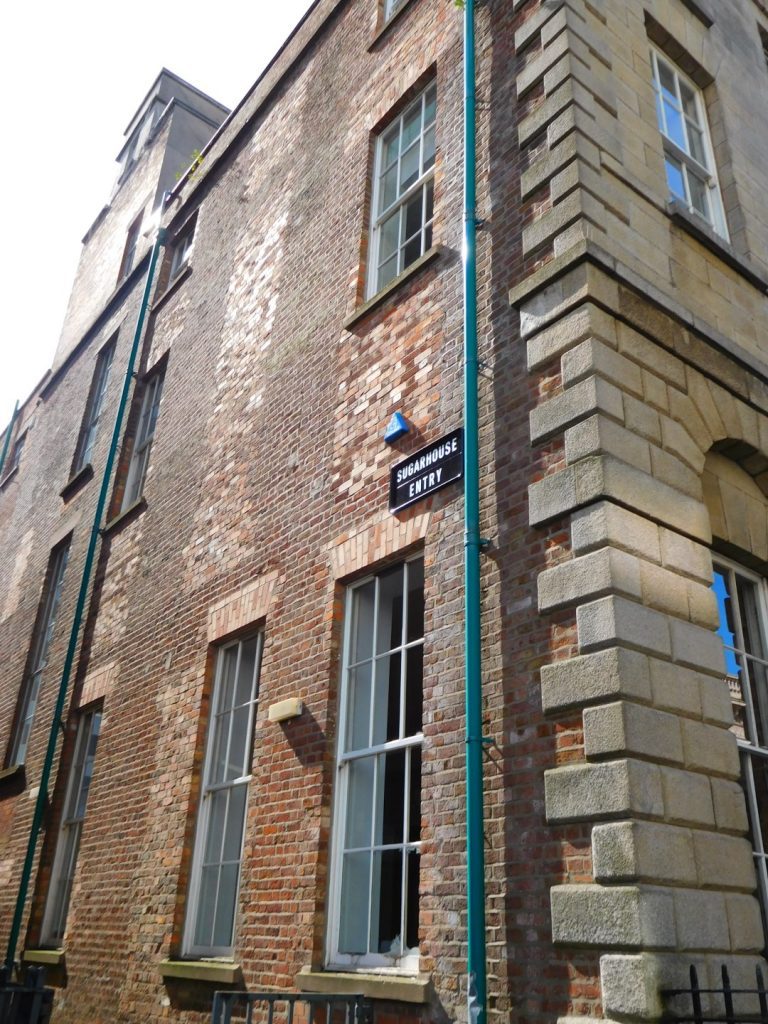 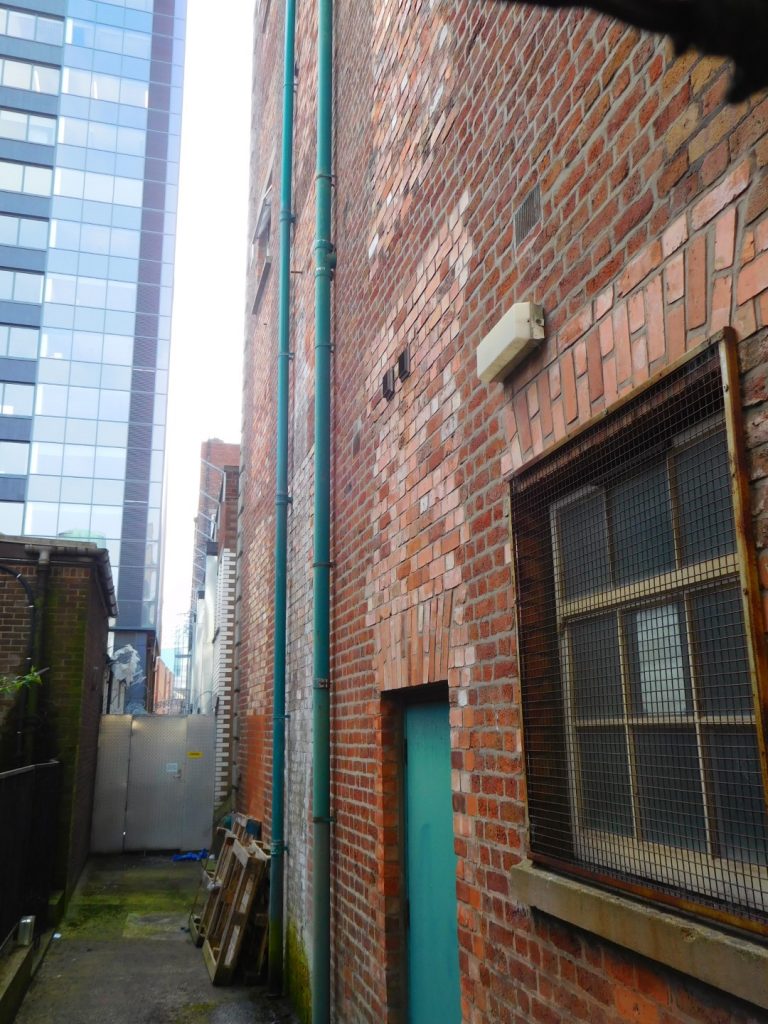