The ruins of Layde (sometimes spelt Layd) Church and graveyard lie nestled in a secluded valley close to the north Antrim coast. It is situated in the townland of Layde in the barony of Glenarm Lower. These ancient remnants, only one mile from the busy seaside town of Cushendall, remain concealed from the passer-by. It is only from the sea that the Church can be seen from a distance.  The beauty and tranquillity of the landscape only add to the atmosphere of calm and spirituality of these important remains.

We are told by Lieutenant John Chaytor in the Ordnance Survey Memoirs that the townland and parish of Layde got its name from a young Scottish girl called Lydia. She eloped from her homeland with her true love and arrived here on the Antrim coast. Unfortunately the couple were pursued and captured at Knocklayd. Hopefully that story had a happy ending.

Beginnings of the Church

Some archaeologists contend that this site was originally a place of pagan worship in the Iron Age.

In 1288 we know a Christian church was at this location, referred to as ‘Ecclesia de Layde’. This is thought to have been the chapel of a Franciscan monastery. By 1291 it is included in the Taxation of Pope Nicholas. Papal tax was only collected on parish churches, so Layde Church must have been the local church for the surrounding area.

However, by the early seventeenth century this little church was derelict and abandoned. This was probably due to the Dissolution of the Monasteries 1536-40, under the English king Henry VIII. The Ulster Visitation book of 1622 records “Ecc. De Laide – Ruynous”. It remained in this condition for more than 70 years.

“….the church of Layd harde by without roofe… seemes to have been a handsome country church with a square steeple aboute 30 foot high, stands in a bottome near the sea, noe howse within a quarter of a mile; this pleasant dry ground under the mountaynes”

In 1696 the Layde Church was rebuilt as a Protestant place of worship. An inscribed stone in the east wall marks the date of the restoration.

“The ruins stand in the parish churchyard. A stone which has been in the east wall bears the date 1696; but this must refer to the repair or restoration of the church in that year, as the general character of the building, and the fact that the graves outside are nearly five feet higher than the floor inside, indicate a much greater age”

The church was 61ft in length and 24ft wide. It was built of local red sandstone and schist and had a thatched roof. Schist is a metamorphic rock formed in thin layers. The word schist is derived from the Greek word schízein meaning “to split”, which is a reference to the ease with which schist rocks can be split.

The McDonnell coat of arms feature over the main entrance. At the western end is a smaller square-shaped building with an arched ceiling. It is still possible to see the imprint of the wicker framework in the mortar. This was possibly used for the storing of sacred vessels. The room above is thought to be the priest’s accommodation. There is a window here that opens into the church. The upper room was only accessed by an outdoor wooden staircase.

Three generations of the McArthur family served as clergymen at Layde from 1696 to 1793. They earned the respect of the locals by preaching in the native Irish tongue. The church continued in operation until 1790 when a new church was constructed in the nearby town. Layde again fell into disuse.

In 1832 the area is described in the Ordnance  survey memoirs

“…east of the shore or mountain road to Cushendun about a mile from Cushendall, which is called the Old Church, around which, is situated the chief burial ground of the parish. There is nothing to be seen here but the walls and a few tombstones”

However, the graveyard did continue in use. It is the burial ground for many generations of the McDonnell family. Aside from Bonamargy Friary, near Ballycastle, this was the chief interment site for this ruling clan.

“Was it not the burial place for many generations of the descendants of Colla, eldest son of the celebrated Sir Alaster McDonnell, Knight of the Field, who was descended from Colla McDonnell of Kenbann, an elder brother of Sorley Boy, ancestor of the Earls of Antrim and, therefore a more senior branch of the McDonnells than that now represented by that noble line?”

Perhaps the most striking mortuary marker here is the small ‘holestone’ known as the Cross Na Naghan. It was erected at the grave of Frank McDonnell of Legg buried in 1861.

“Died at his home Lignamonagh, 7th June 1861, Mr Francis McDonnell, in the eighty ninth year of his age. His ancestors were closely allied to the first Marquis of Antrim and that noble family always looked upon, and regarded him as their kinsman. Deeply regretted by a large family

There are two stories surrounding this unusual headstone. The first is the stone was brought from Scotland by the first McDonnells who settled in the nearby townland of Legge. Subsequently the cross ended up on the farm of Randal McDonnell at Lisnamonagh. Apparently it was discovered by Monsignor O’Laverty in the course of his researches, lying against a gable wall and used for tethering cattle. The antiquarian was deeply unimpressed and demanded that the ancient monument be returned to an ecclesiastical setting; hence it became the headstone for Frank.

Another version claims that the holestone was brought to Ireland by St Naghan, whose name is inscribed in the soft sandstone. He was a former Pictish king and one of the founders of Christianity in Scotland. Very little is known about Naghan, but it seems he fled to Antrim around 600AD in reparation for his sins. Scotland is just 14 miles away across the Irish Sea.

It is believed the holestone is a relic of an earlier pre-Christian belief system but its pagan credentials were overridden by a basic cross carved into the stone.

Another important McDonnell headstone is the imposing and beautifully carved Celtic cross marking the final earthly resting place of Dr James McDonnell. It stands at the west end of the cemetery. The cross, decorated with Irish motifs and Biblical stories of healing, reflects the good doctor’s life interests – medicine and Celtic culture. It is inscribed  “He was a man beloved, whose ability was ever outweighed by his piety”.

While the most numerous graves here belong to the McDonnell clan, other names in the burying ground include McAuley, McCambridge, McCormick and Delargy. For a complete listing see the Survey of Layde Graveyard by the Glens of Antrim Society.

Why is Layde Church Hidden?

The mysterious location of Layde Church is discussed by Colin Manson [(see www.my-secret-northern-ireland.com) in his article Old Layde Church, A Hidden Church in Northern Ireland. He asks the question why this church is so hidden from view. Usually churches are placed in the centre of communities as a constant reminder of Christian duties.

One possibility is that Layde was looking east to its near neighbour Scotland. At a time of religious intolerance in the Middle Ages, perhaps the little County Antrim church was offering asylum to non-conformist Scots.  Another reason for its hidden location may have been that the original Franciscan monks welcomed seclusion as an aid to prayer and contemplation.

Layde Old Church is certainly a place of history and peace. Its scenic hidden glen, sparkling stream and sea views make it incredibly beautiful. The stillness and sense of past and present coming together are well worth a visit.

“A quiet mossy lane leads to this hallowed place in a little glen set high above the sea. Here is an uncanny quiet”

Layde Church can be accessed by foot by the Cliff Path or by car via the Layde Road. There is a small free car park.

Click to view images in slideshow mode. Swipe up on mobiles to end slideshow 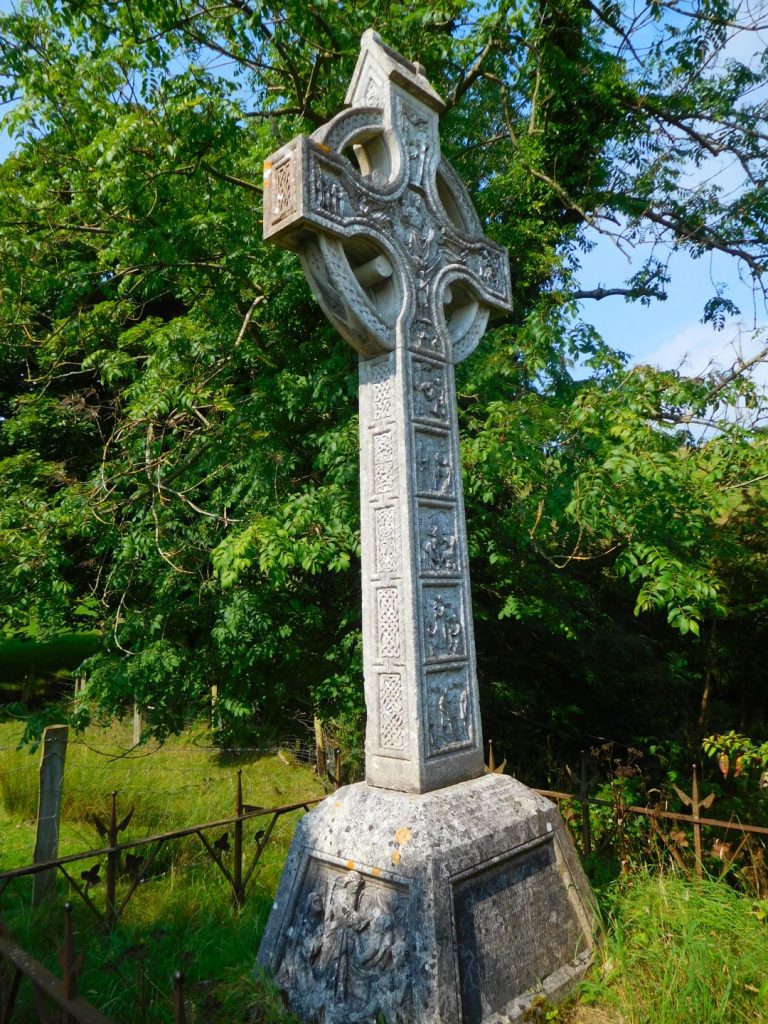 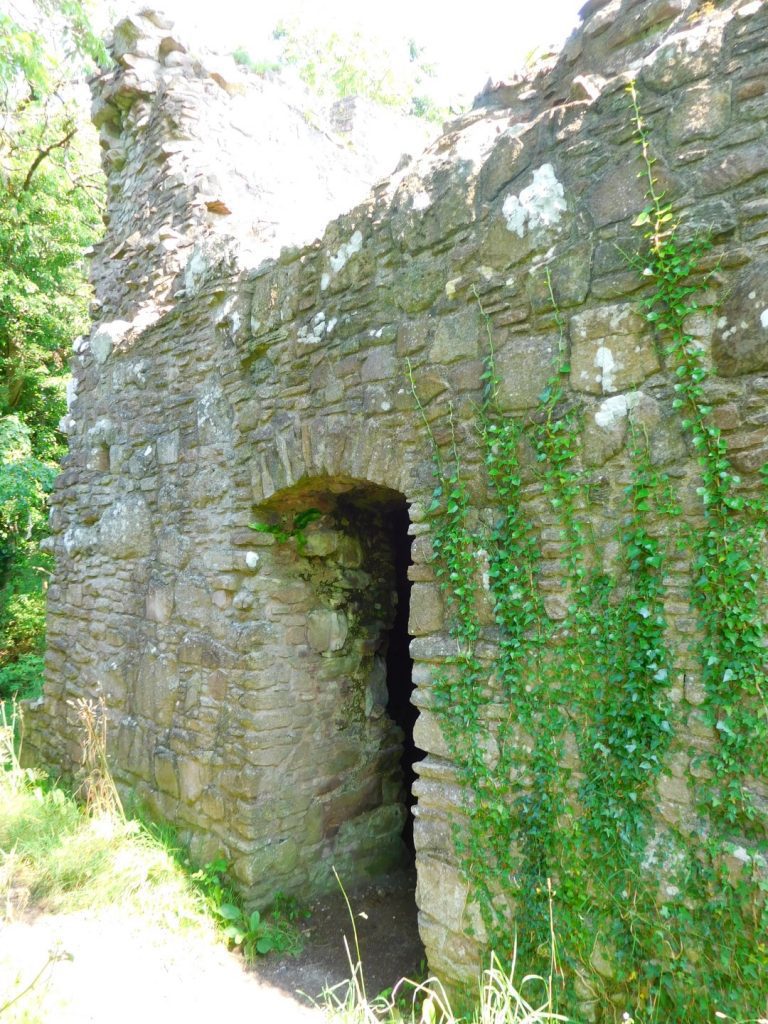 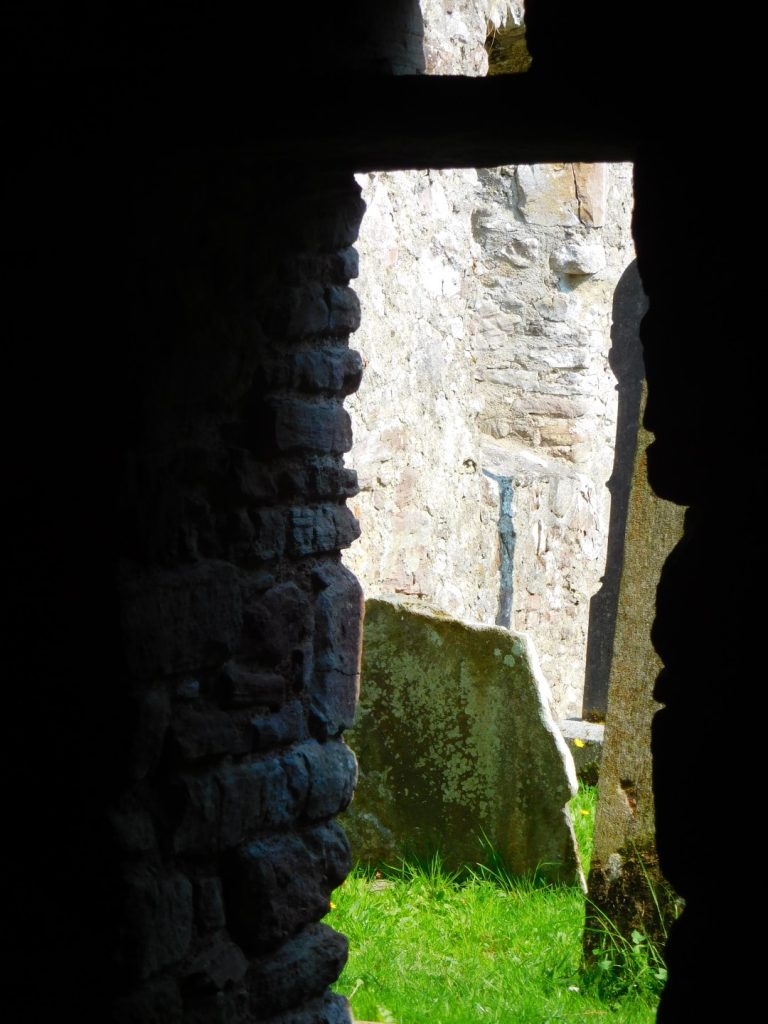 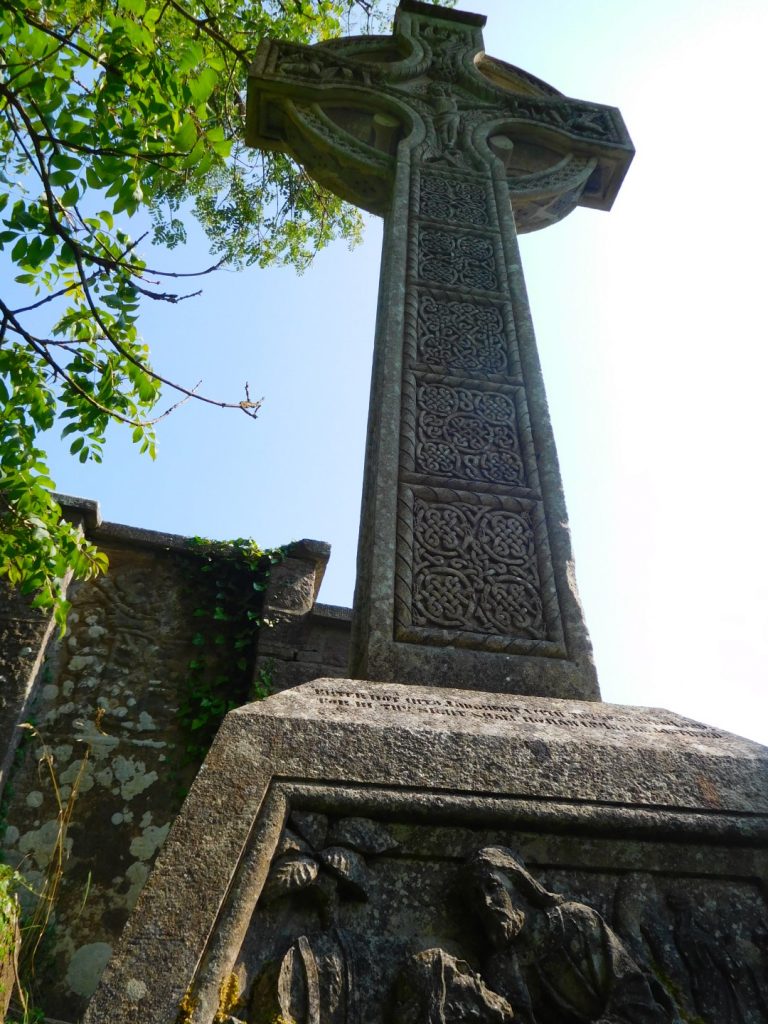 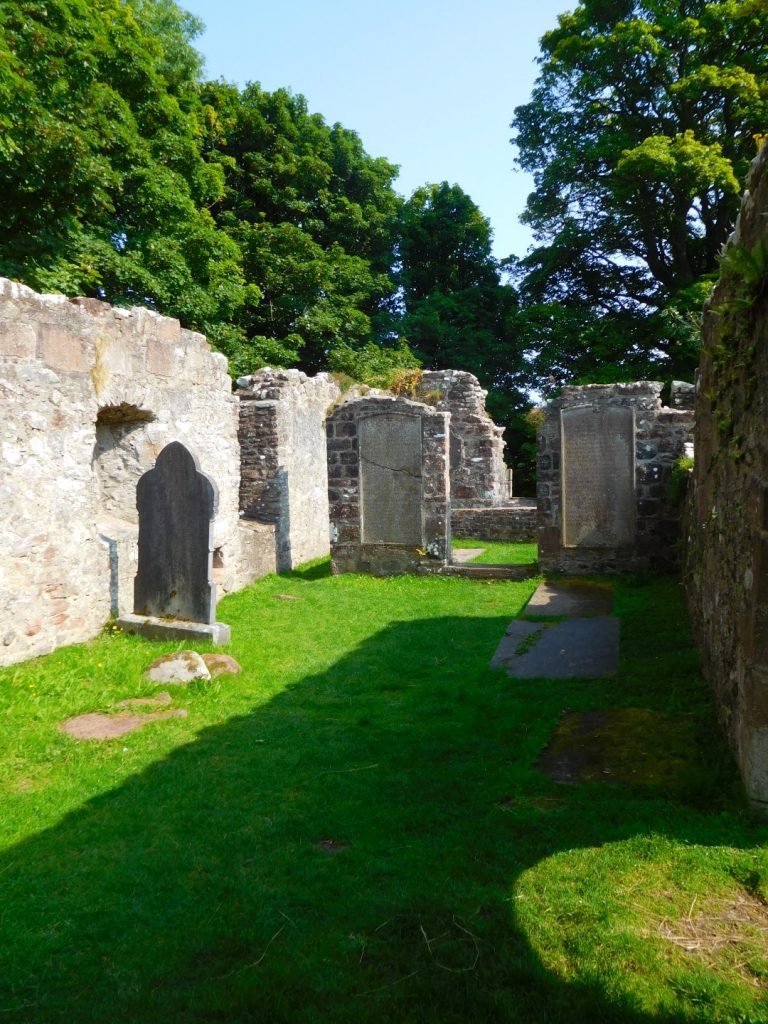 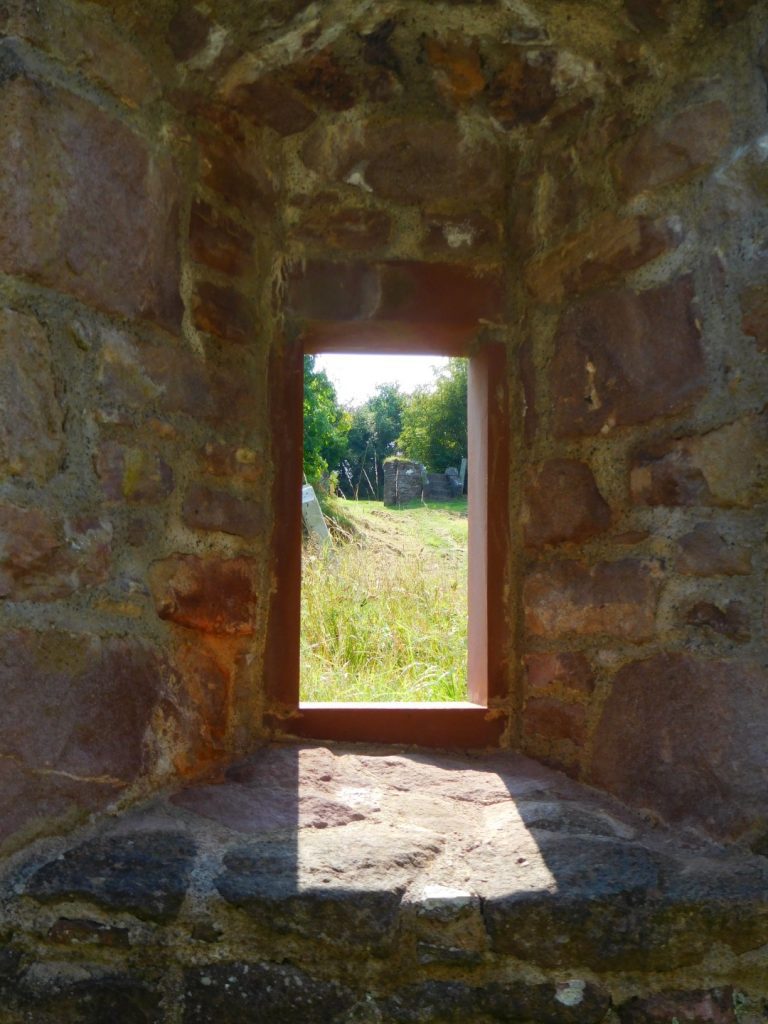 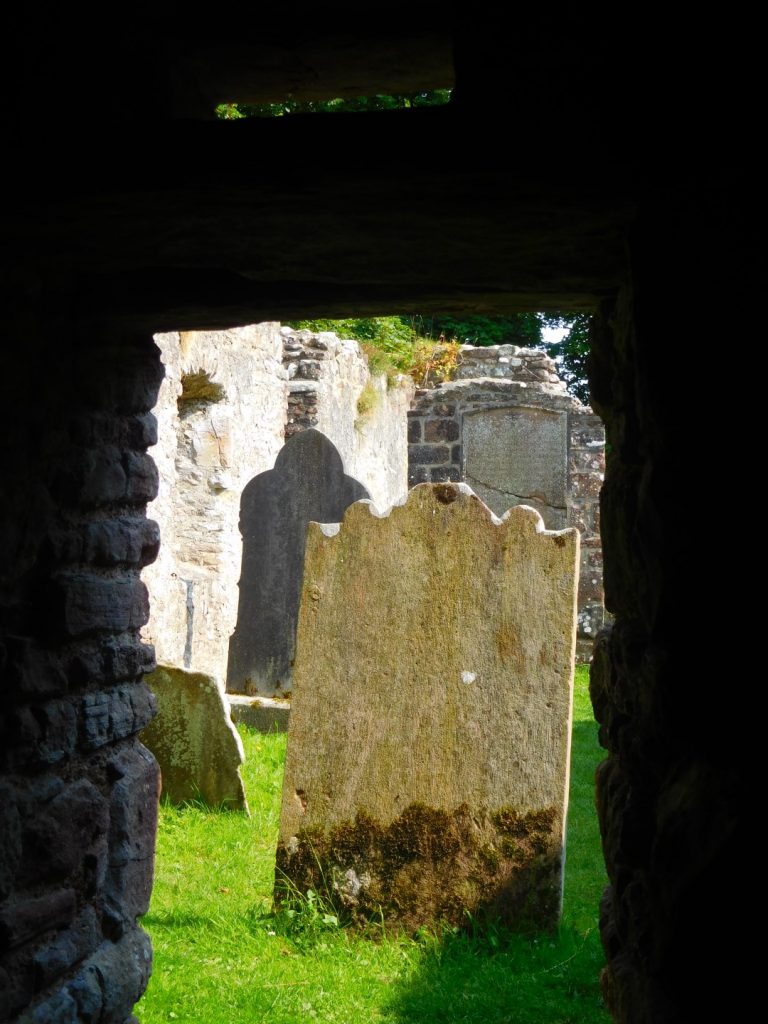 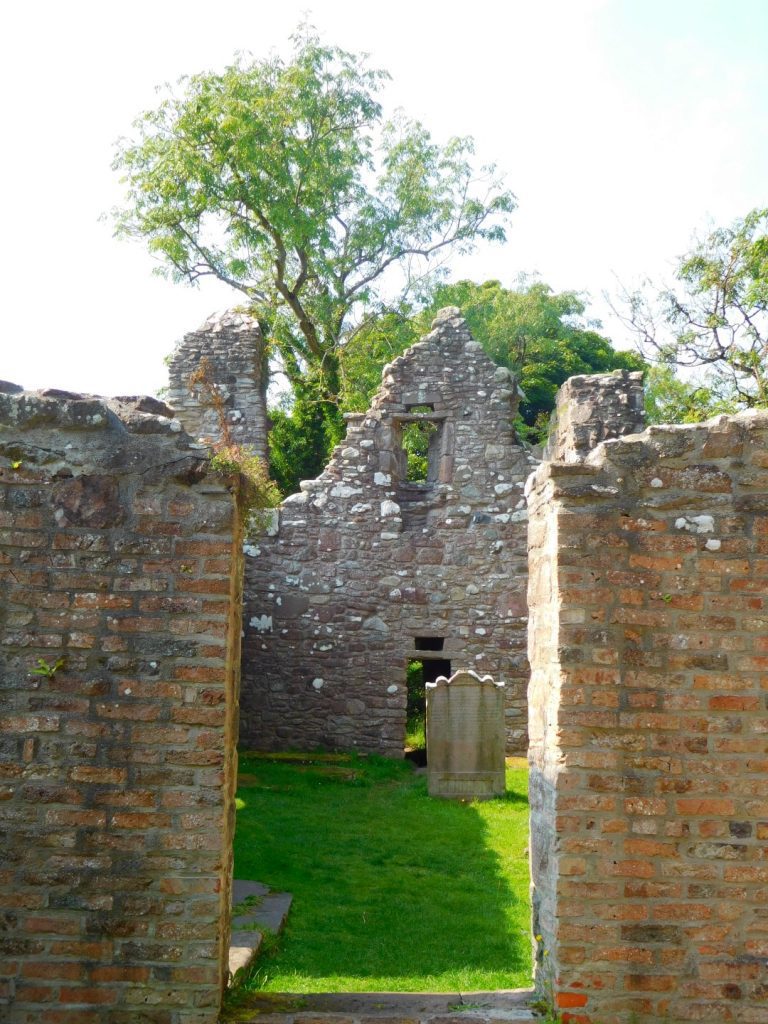 The Holestone of Doagh – A History of Mystery & Marriage

On a rocky outcrop near Doagh, County Antrim is the Celtic standing stone, known as the Holestone – a place of significance for millennia.