Joy Street in the Markets area, in the heart of Belfast, has had an interesting history. It is one of the best surviving examples of Georgian architecture in the city. These houses are common in Dublin but rare in Belfast. Situated only a few minutes’ walk from Belfast City Hall and St George’s Market, the street and the area reflect the history of Belfast itself.

Joy Street takes its name from the Joy family who owned a paper-mill here at the corner of Cromac Street and Ormeau Avenue. Francis Joy established the Belfast Newsletter in September 1737. It is the longest running, English language newspaper in the world and still continues today.

Paper from the mill was also used for the minute books of the Belfast Charitable Society with whom the Joy’s were deeply involved.

With Belfast developing quickly, the pond that supplied water to power the mill was filled in and the marshy land reclaimed to build the new streets.

“Taking the Blackstaff as our boundary, we soon come to Mr Joy’s paper mill and the row of workers houses, which, till recently, stood between the mill and Cromac’s bridge. On the opposite, or town side, Joy’s dam covered the space now occupied by Joy Street (the arches communicating between the river and the dam are still visible)”

Joy Street on the map

In 1819 Joy Street first appears as a proposal on a map of the town. The first actual listing for Joy Street is in the Belfast Street Directory for 1835-36. The first list of residents we could discover is in the 1842-43 Directory. These include

No 42 John Dallas, Inspector of bridges

No 30 The Misses Moore and Mitchell, Dressmakers

The houses were mostly 3 storeys, dark red brick with stone quoins (the external angle of a wall or building acting as a contrast with the red brick of the building). The doors had ornamental panelled pilasters (architectural element used to give the appearance of a supporting column) and decorative semi-circular fan lights. Some had medallions in the architrave over the doorcases. The large windows had astragal glazing bars giving the effect of smaller window panes. The houses also had beaded chimney pots and bootscrapers.

“The leisurely development of the Georgian terrace house can be studied instructively in the area around Joy Street, Hamilton Street and the district known as ‘the Markets’….This district more than any other gives a vivid impression of Belfast as it was before the full gale-force of the Victorian industrial expansion struck”

These houses were originally built for respectable merchants and businessmen. Many had gardens to the rear. Their proximity to the centre of trade and commerce made them ideal for Belfast’s developing middle classes.

“….late Georgian quality housing catering for the increasing number of well-to-do merchants and industrialists of the period”

However, as Belfast became more industrialised and with the influx of the starving poor during the Famine the wealthy began to move from the city centre to the suburbs and more rural locations. Malone Ridge to the south became a popular residential area for those who could afford it.

As new streets were built in the expanding city, the students moved away to areas more convenient to the College, like University Road and the Ormeau Road

The next demographic to move to Joy Street were visiting actors and musicians. These theatrical folk found lodgings in Joy Street and the surrounding area ideally situated for their daily performances in Belfast’s music halls and theatres. For example the music hall artist Walter Walton stayed here in the 1920’s and Madame Lura, palmist was at No 30 in 1900.

Belfast had numerous entertainment venues at the time. Some of the more popular were The Star Concert Rooms in Ann Street, The Empire in Victoria Square, The Palace of Varieties in Great Victoria Street and the Royal Alhambra in North Street.

The most famous actor to lodge in Joy Street was Charlie Chaplin. He is said to have resided at No 24 while a young performer in the city. The Directory shows a Mrs Jane O’Neill as the owner of the property at this time. Chaplin was a member of a clog-dancing troupe known as the ‘8 Lancashire Lads’. They performed in the Empire on 26th November 1900 when Charlie was only 11.

Charlie Chaplin returned to Belfast and the Empire at age 16 with Casey’s Circus in January 1907. He also appeared at the Palace of Varieties (now the Grand Opera House) with the Fred Karno Company in a sketch ‘The Football Match’ in 1908.

“It (Joy Street) was formerly known as the ‘Street of the Three P’s’ for Pride, Poverty and Pianos, since each house had a piano in its parlour for the use of music hall artists residing there during their runs at the Empire and other theatres”

A funny story, recorded in the Belfast Telegraph 28th December 1977, recalls the landlady of the boarding house recounting “how Charlie had the curious habit of climbing in through the front window after his nightly stints at the Empire, in preference to the front door”. The young entertainers all slept head-to-toe in the same bed. 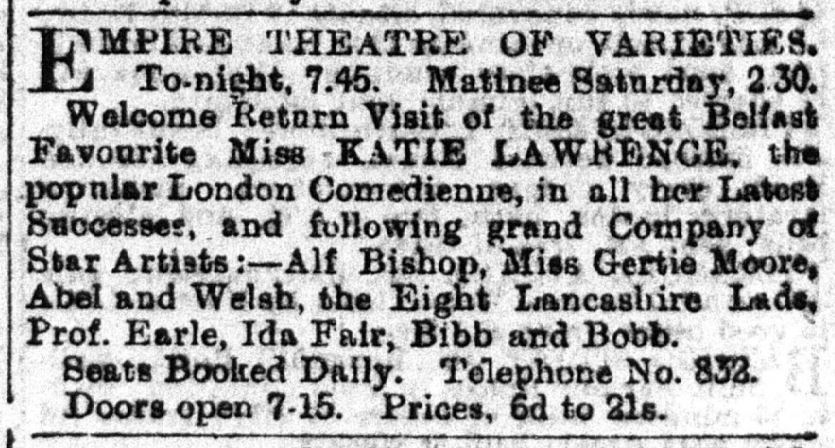 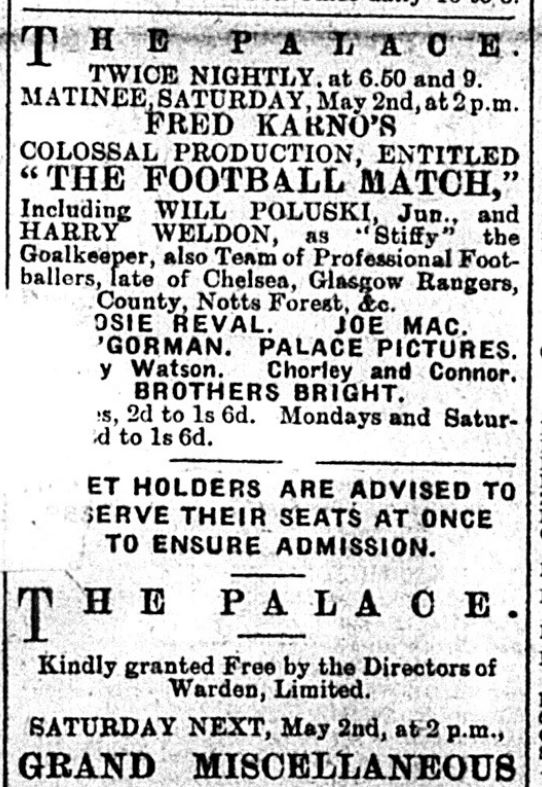 Chaplin Tribute at the Titanic Quarter

Charlie Chaplin’s visits to Belfast are commemorated in metalwork at the Titanic Quarter at Belfast docks near the Titanic Centre and the SS Nomadic which ferried passengers to the Titanic and other large ships. The Sustrans Portrait Bench (below) illustrates a shipyard worker who helped build the Nomadic, a French waiter who served on the Nomadic and Charlie Chaplin, possibly her most famous passenger.”

It was only more recently that we heard of the statue of Chaplin on Joy Street.

When we first heard that there was a tribute to Charlie Chaplin in the form of a statue on Joy Street we were surprised. We had walked this street many times with noticing it. On our return to look for it we found it… eventually. Let’s just say it is a bit of a challenge to find it!

We have 2 photo galleries below. the first includes general views of Joy Street from the street with the statue appearing in one photo. Try to see if you can see it. The second gallery reveals the statue location with photos

Joy Street over the years

Over the course of the 2oth Century the area became more ‘run-down’. Young families wanted smaller houses with better amenities and moved away. With ‘the Troubles‘ ongoing, Belfast city centre became a ‘no-man’s land’ especially at night. Houses became derelict and were demolished.

An Ulster Architectural Heritage Society survey of the Joy Street and Hamilton Street district of Belfast was commissioned in 1970 . Ten groups of buildings were identified as being of “historical and architectural importance” to the city. Only 3 of these were saved.

One nearby redevelopment that is interesting to note, is the housing for older people that was built in 1987. It is named the Chapelfields Fold.

This is sited in the area were Ma (Clara) Copely, the famous boxing entrepreneur, had her boxing grounds. Many of Belfast’s boxers began their careers here, including Rinty Monaghan, Eric Boon and Jimmy Warnock.

Today only a small number of the original Georgian terraced houses remain, Nos 14-26. However, their restoration has revealed impressive facades and is a striking reminder of a by-gone era.

They have been described as “the finest block of Georgian houses in Belfast” displaying “the grandeur and dignity of the Markets area when it was first developed” – Central Belfast: A Historical Gazetteer

The gallery below includes images of Joy Street today. One image includes the Charlie Chaplin statue. Can you find it? (If not, the statue and its location is shown at the foot of this post). 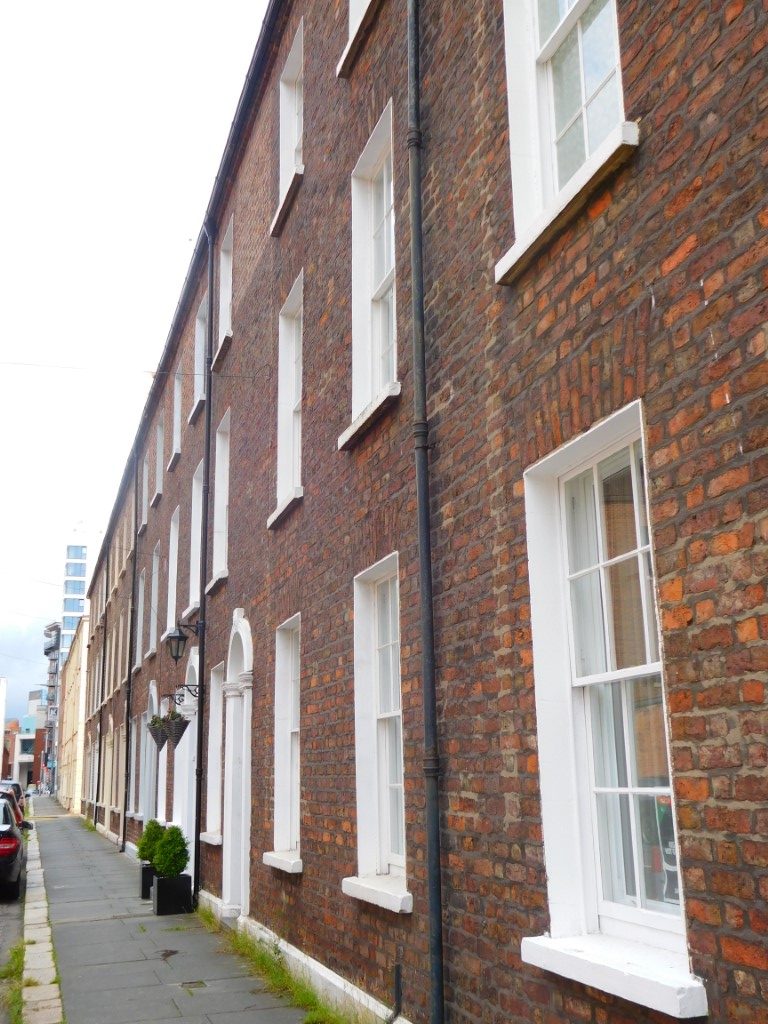 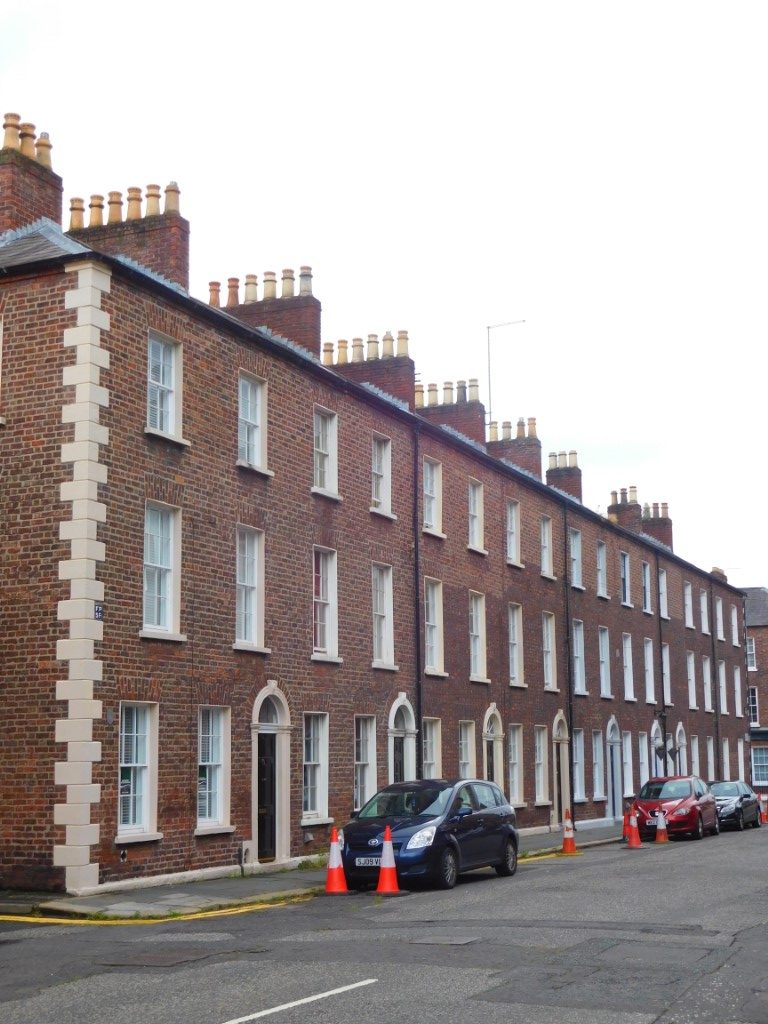 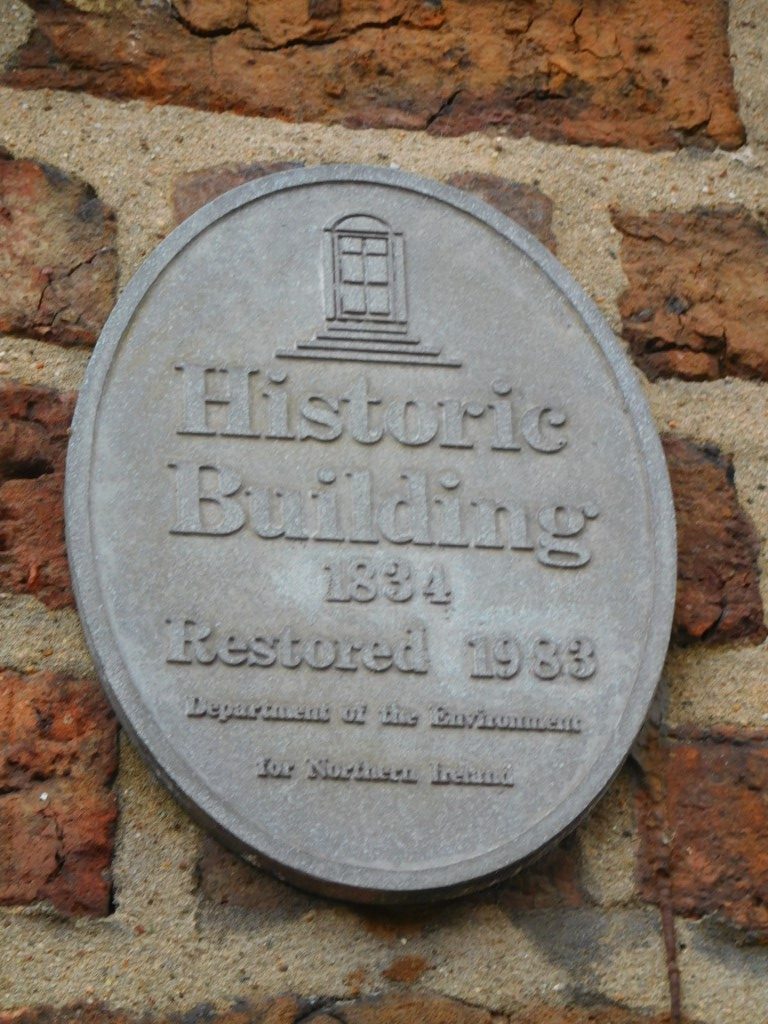 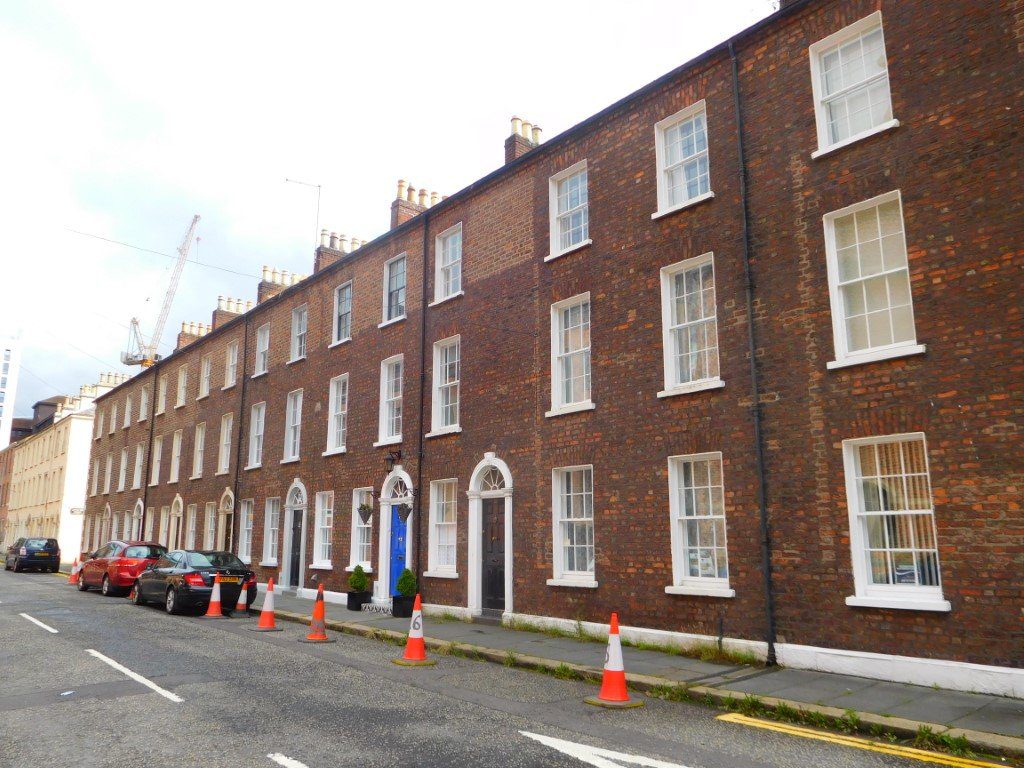 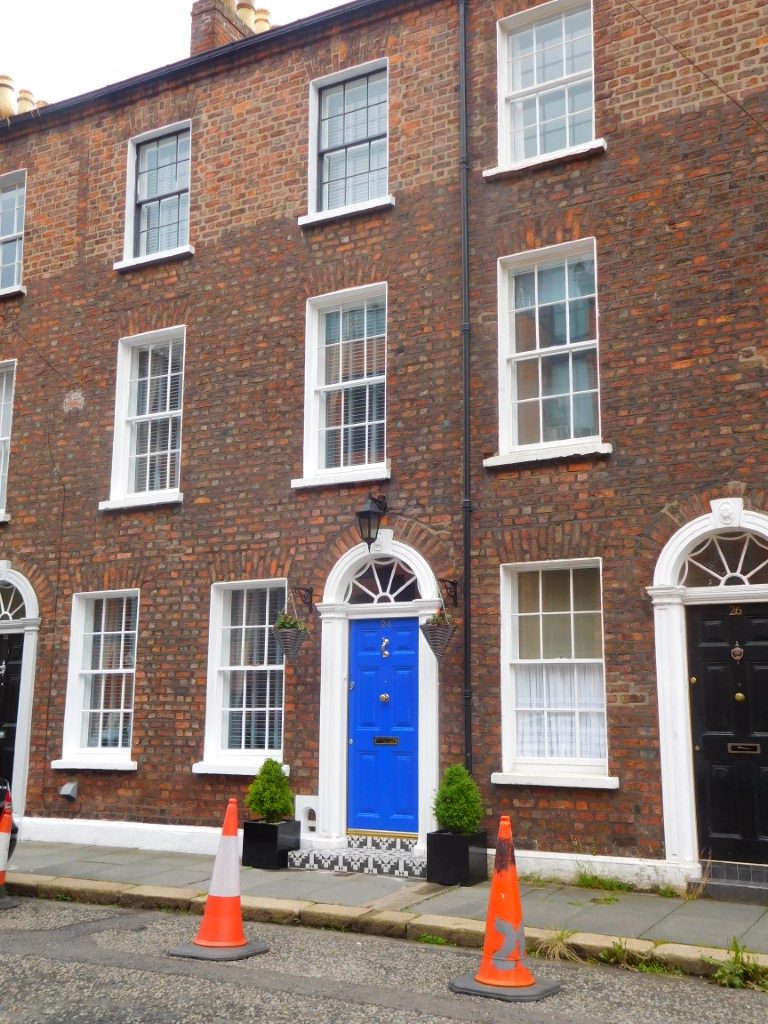 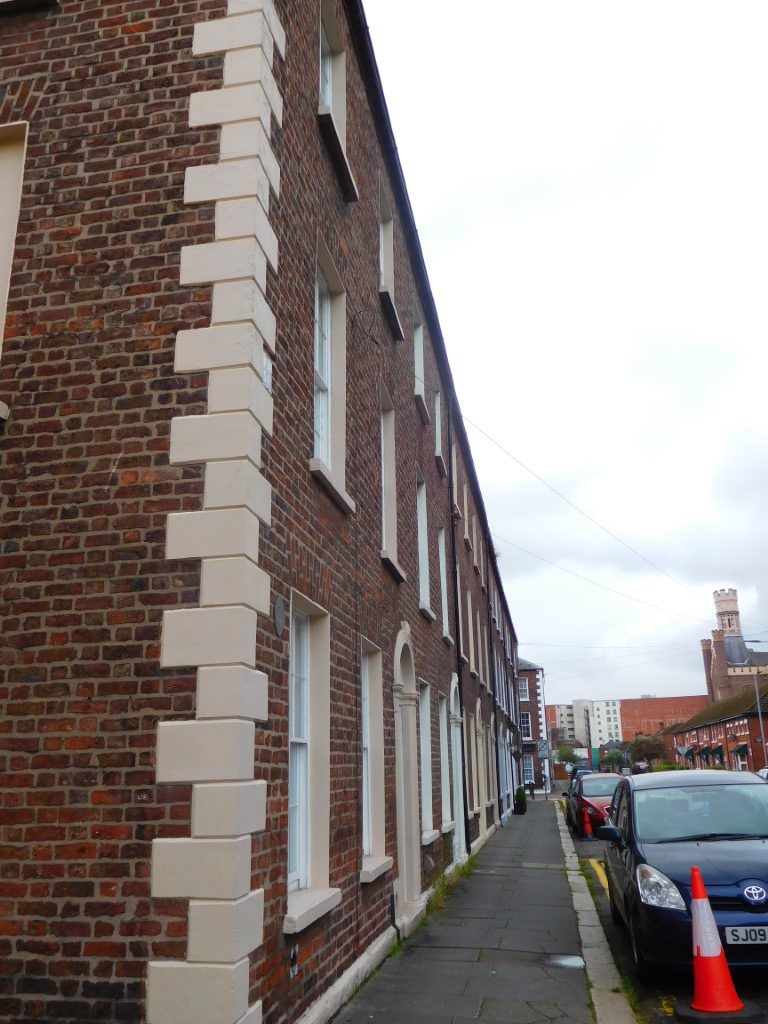 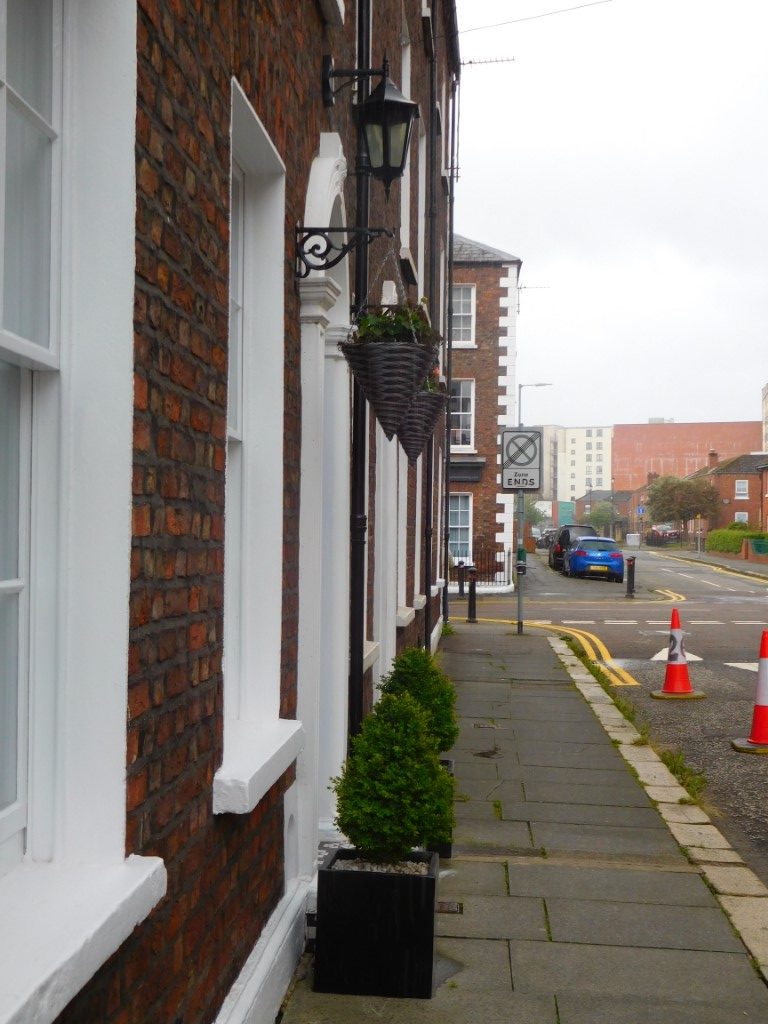 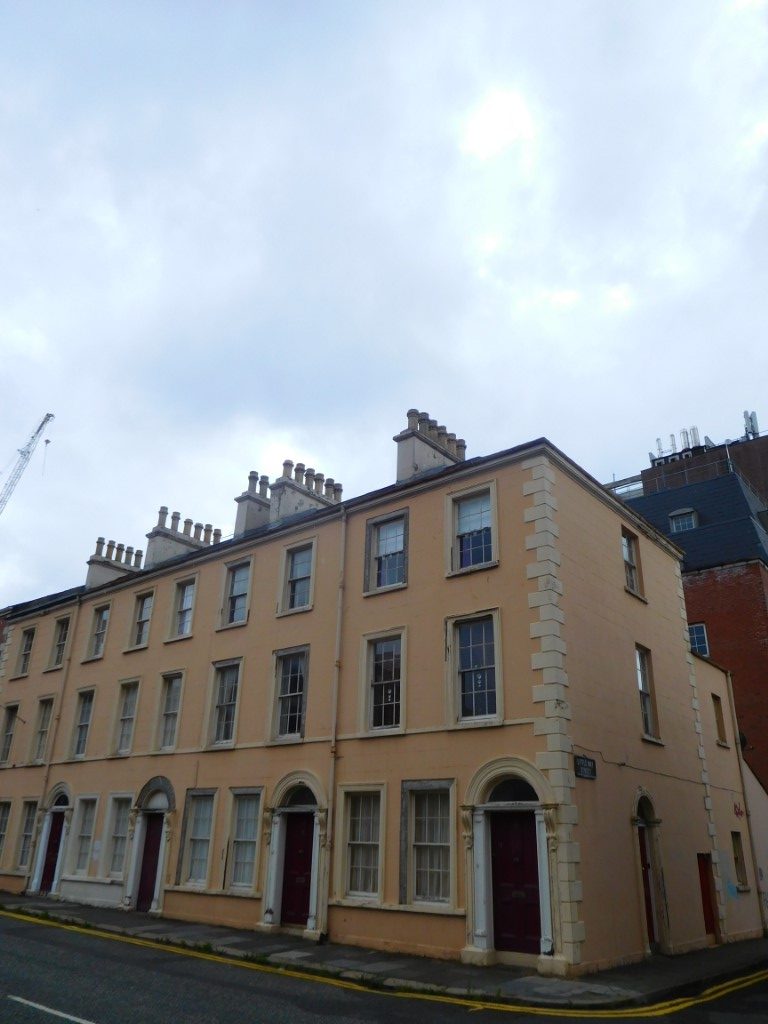 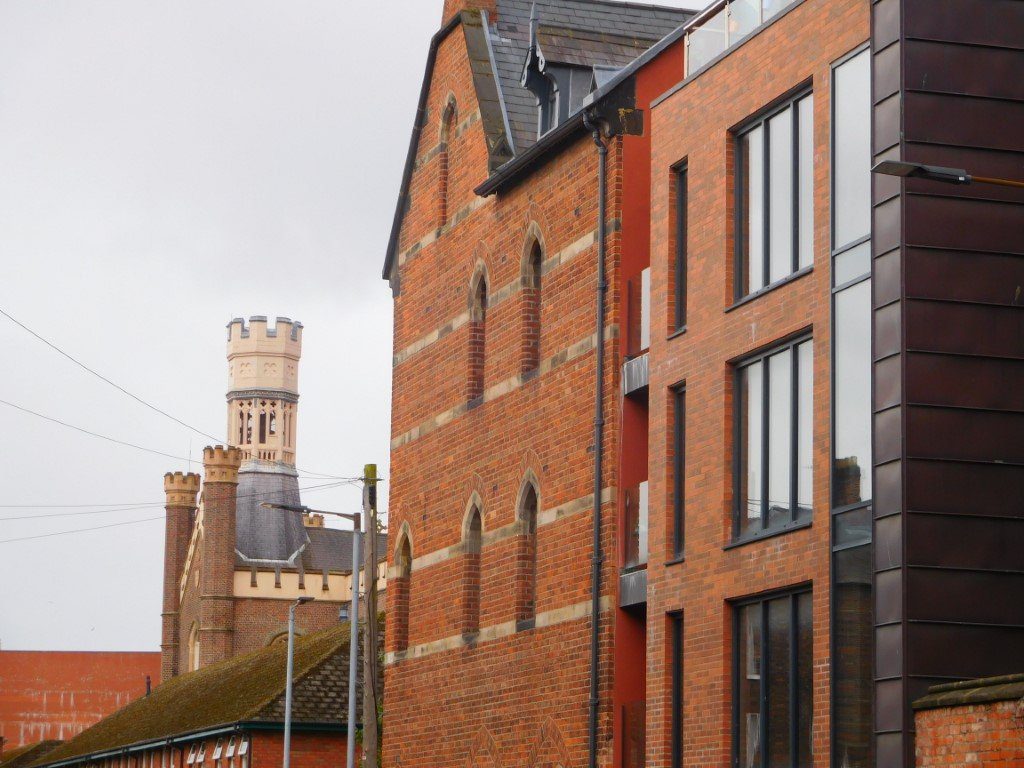 Where is Charlie Chaplin? Spoiler Alert!

Well did you succeed in spotting Charlie Chaplin? He’s not easy to find.

As a memento of Charlie’s residence in the street, the architectural firm Hamilton’s erected a small statue of the actor outside their premises in Joy Street. This is the building? Spotted him yet?

Charlie stands about 12 inches tall – high above the street level. Nobody said it would be easy! 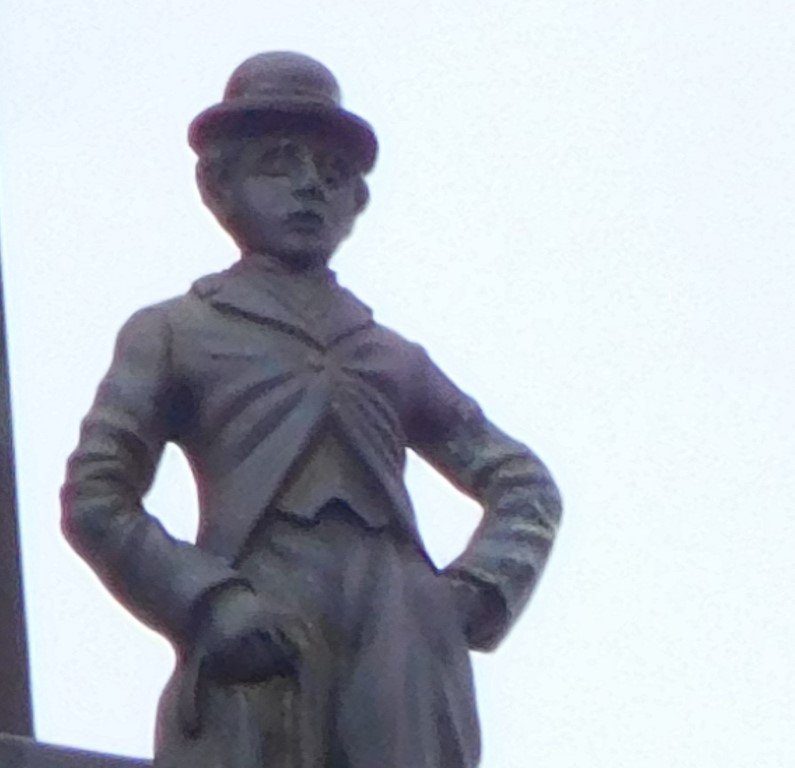 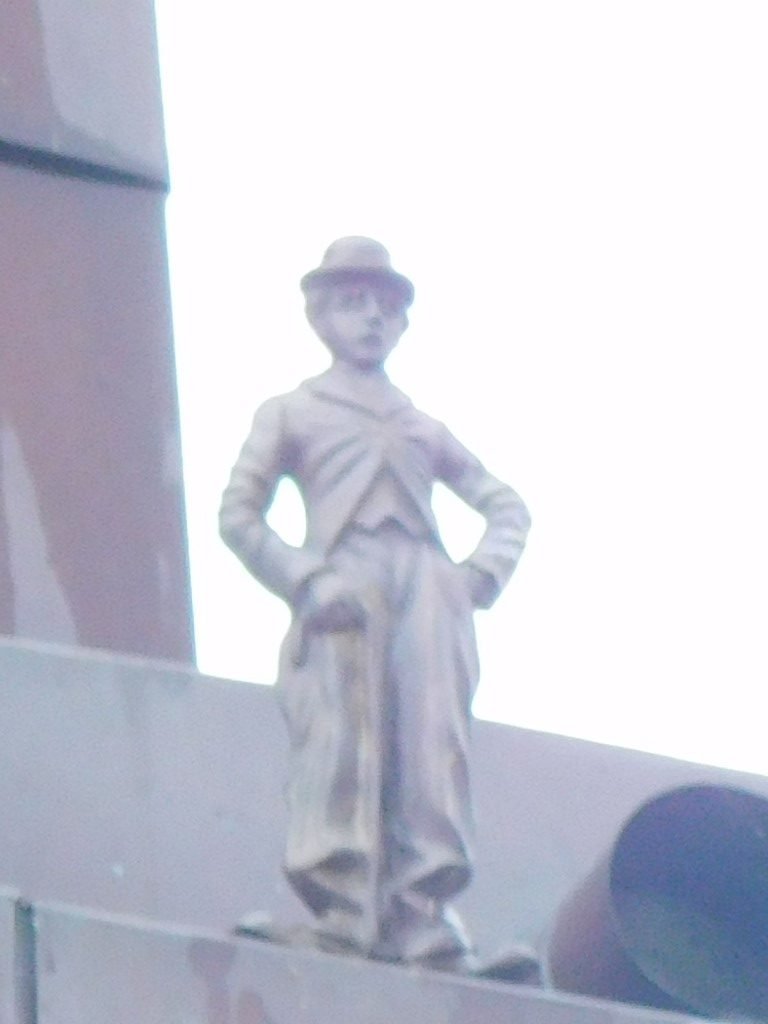 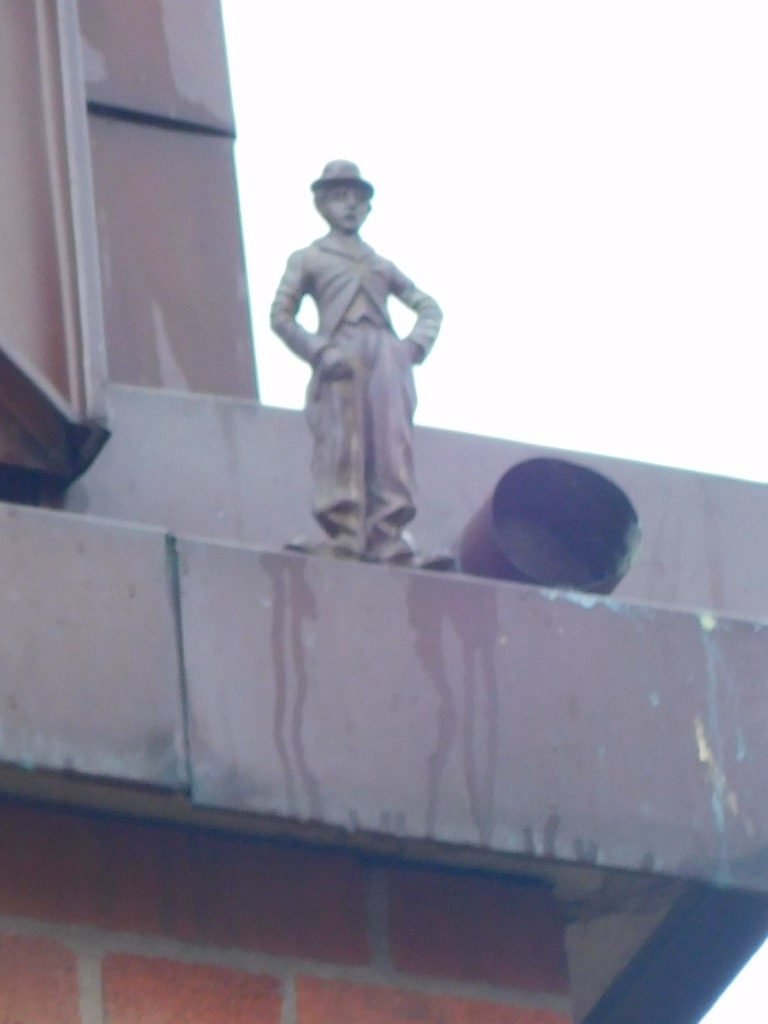 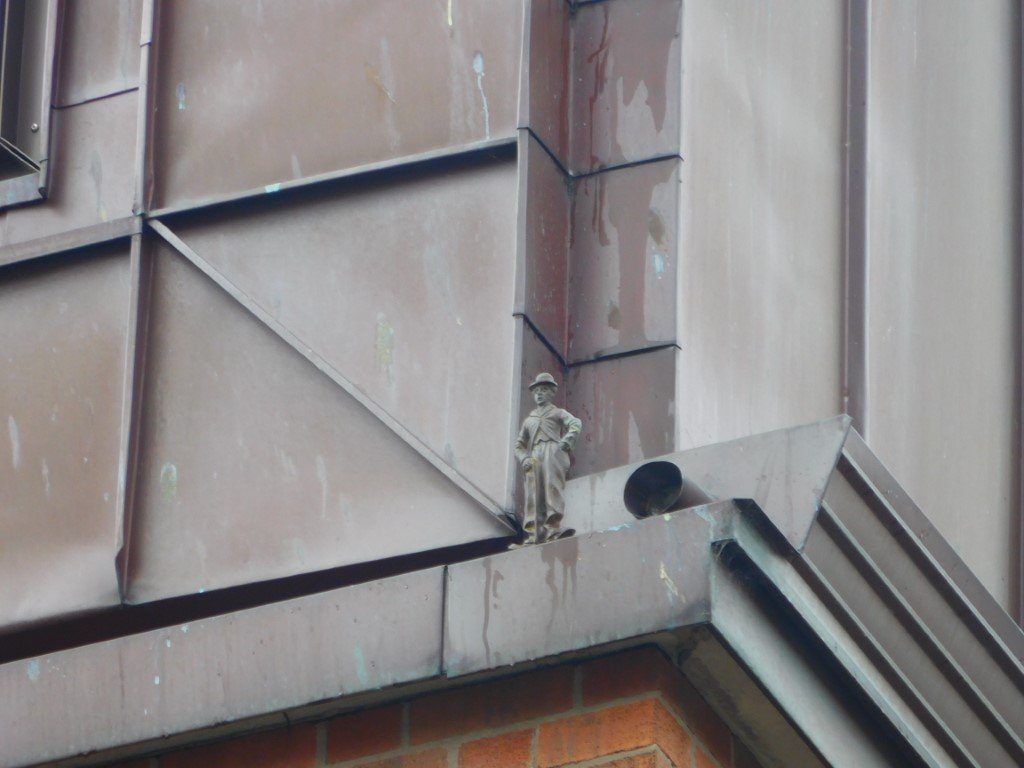 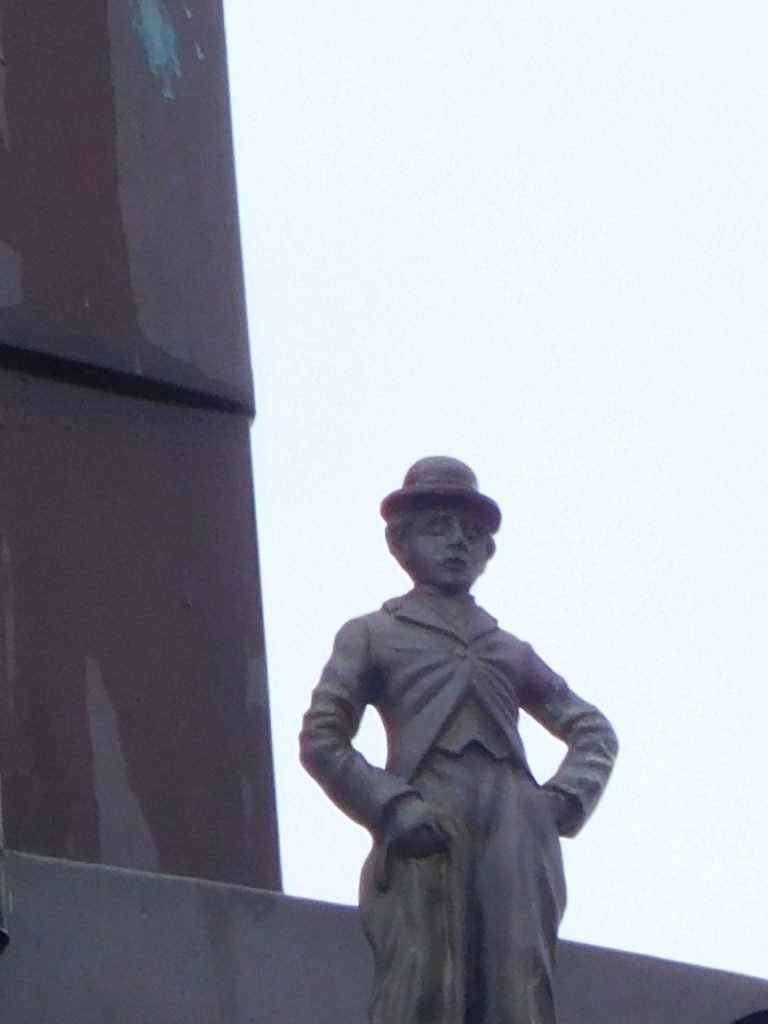 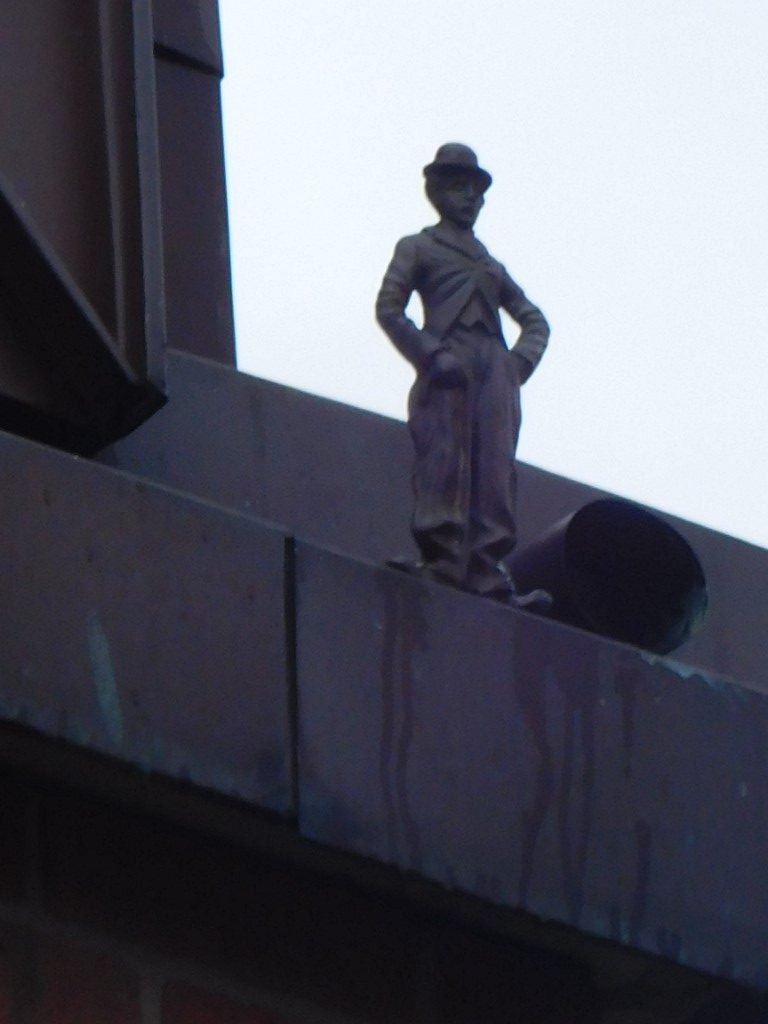 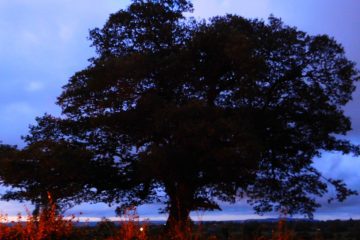 Roughfort, Co Antrim, has 3 historic sites close to each other - a Bronze Age passage grave, a Norman motte and a 200+yo Liberty Tree 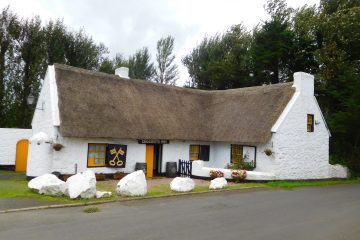 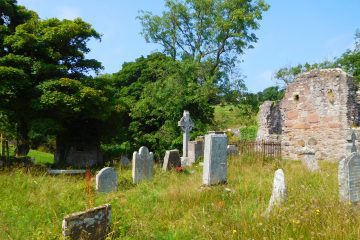 Layde Old Church is a place of history and peace. Its scenic hidden glen, sparkling stream and sea views make it incredibly beautiful.