Growing industrialisation in Ireland and particularly in towns like Belfast, made the traditional weaving and spinning in individual homes obsolete. The rural population flocked to Belfast to work in the city’s mills and factories.

By the early nineteenth century St Mary’s Church, which opened in May 1784, could no longer could accommodate its Catholic congregation. In 1809 Fr O’Donnell secured a lease of 99 years from George Augustus, 2nd Marquis of Donegall, for a site to build a second church. This plot was a former rubbish dump on the east side of Donegall Street – the location of the current St Patrick’s.

“To architects, the Catholic Inhabitants of the Parish Of Belfast intending to proceed immediately to the Erection of a Chapel in Donegall Street, are ready to receive Proposals for executing the same by Contract, according to a Plan in the hands of Mr Patrick Davis, North Street, where every necessary information may be had…..Proposals for the Stone and Brick Work will be received until 2nd April, and not longer”

While there were some Catholic merchants in the town at the time, the majority of Catholics were extremely poor, living ‘hand to mouth’. Once again Fr O’Donnell had to seek donations where he could, for example, he literally waylaid Lord Castlereagh!

“Fr O’Donnell and Mr Hugh Magill watched at the Long Bridge till he was passing, when they asked for a subscription for the projected new church, when his lordship handed them £100 from his carriage”

Life and Times of the Rev Hugh O’Donnell, John Cramsie 1868

Mr Gaffigan of Academy Street was employed to build the original church.

An advert in the Belfast Newsletter announced the opening of St Patrick’s Church on 5th March 1815.

The newspaper went on to describe the event, it commenced with Messrs Hughes and Nichols singing Handel’s hymn ‘Comfort Ye My People’.

The Right Rev Dr McMullan preformed the consecration service in Latin and the Rev Mr Crolly gave the sermon which “suffice it to say, the whole seemed well calculated to gratify every person present”.

The original St Patrick’s was constructed of red brick with pointed arched windows. It was set back from the street with iron railings paid for by Mr Houston of Orangefield. There were only two rows of seats near the altar, so the majority of the congregation had to stand for services. The pews in the gallery were bought in advance, presumably by the more wealthy, a practice carried on in all churches until the end of the nineteenth century.

In November 1833 Fr Cornelius Denvir was appointed Parish Priest of St Patrick’s. Baptismal records reflect the fast growing congregation. In 1836 there were 492 baptisms but by 1838 this had risen to 1,196.

In response another Catholic Church was planned. The foundation stone for St Malachy’s in Alfred Street was laid in 1841.

On 7th February 1840 St Patrick’s had a special service to display the new organ acquired for the Church.

“…a festival so long and so anxiously anticipated by lovers of music, took place yesterday in St Patrick’s Chapel…. the interior of the sacred edifice was newly painted and decorated for the occasion…”

In 1866 Dr Dorrian became bishop following the death of Dr Denvir. In October of this year a fourth Catholic Church was opened in Belfast. The land in the Pound district of the lower Falls Road had been donated by Barney Hughes for the building of Saint Peters Church – now St Peter’s Cathedral.

The need for a new Church

In June 1867 part of the floor of St Patrick’s collapsed causing panic among churchgoers. Fortunately there were only minor injuries, but the decision was taken that a new larger church on the same site was a necessity. However, money was scarce and it was not until October 1874 that adverts for builders appeared in the local newspapers.

The foundation stone for the new St Patrick’s was laid by Dr Dorrian on Sunday 18th April 1875. The Church officially opened on 12th August 1877.

It was designed by Belfast architects Timothy Hevey and Mortimer H Thompson in a Romanesque style and constructed by the Collen Brothers of Portadown and Dublin. An iron cross decorated with shamrocks topped the 180ft high spire. A two ton bell, cast by Thomas Sheridan & Co of Ballymacarret, was enclosed in the spire.

A 6ft 4” statue of St Patrick, Patron Saint of Ireland, carved from Portland stone, stands in a niche over the main entrance. This statue and the High Altar were constructed by Messrs Neill and Pearce of Brunswick Street, Dublin. (James Pearce was the father of Padraic and Willie Pearce executed for their role in the 1916 Rebellion).

Stained glass windows decorated the curved wall behind the altar and a large rose window looks over Donegall Street. The Church was planned to seat 2,000 people.

The consecration of the new St Patrick’s in 1877 was attended by clergy from all over Ireland as well as figures from public life such as Joseph Biggar and Barney Hughes. The ceremony lasted over 4 hours and was a great ecclesiastical success (also a financial one, donations reaching £2,755).

“On Sunday 12th August the town of Belfast witnessed the greatest Catholic, nay, the greatest religious display ever made by any creed within its limits. The consecration of the new and stately Church which adorns Donegall Street was the occasion which gathered together from the four provinces of Ireland, from across the channel and beyond the Atlantic, aye, from a distant Island in the Indian Ocean, no less than 17 bishops, and close on 200 vicars, canons and priests of lesser rank, both secular and regular”

Ordinary folk attended in their droves too

“The day shone out auspiciously over the gilded cross that crowns the spire, which tapers from out the massive and ornate tower whose front adorns the great thoroughfare, on the hurrying crowds that, as the trains emptied themselves, wended their way to the Church, and as the curious and pressing multitude that swayed to and fro in front of the line of police drawn up on the foot-flagging to keep the avenue clear to the doors”.

The Madonna of the Lakes – Sir John Lavery

In 1919 St Patrick’s was presented with a triptych of Our Lady, St Patrick and St Brigid. This was painted by the famous artist and former parishioner John Lavery. It was unveiled on Easter Sunday 20th April. The work is entitled The Madonna of the Lakes.

Mary is adorned in gold robes against the background of the Lakes of Killarney. Hazel Lavery, John’s wife, was the model. His daughter and step-daughter posed for the young Patrick and Brigid kneeling on either side. The paintings are still on view in the Church.

St Patrick’s is still the heart of a busy city centre parish. It remains an impressive and dramatic building on Donegall Street. It is close to the Clifton Street Poor House and only 10 minutes walk from the centre of Belfast. Saint Patrick’s has survived two world wars and the Troubles and still retains a sense of peace and dignity.

Despite its grandeur it is a quiet and restful haven in the bustling city. For all its history, both happy and sad, it has a welcoming atmosphere for parishioner and visitor alike. 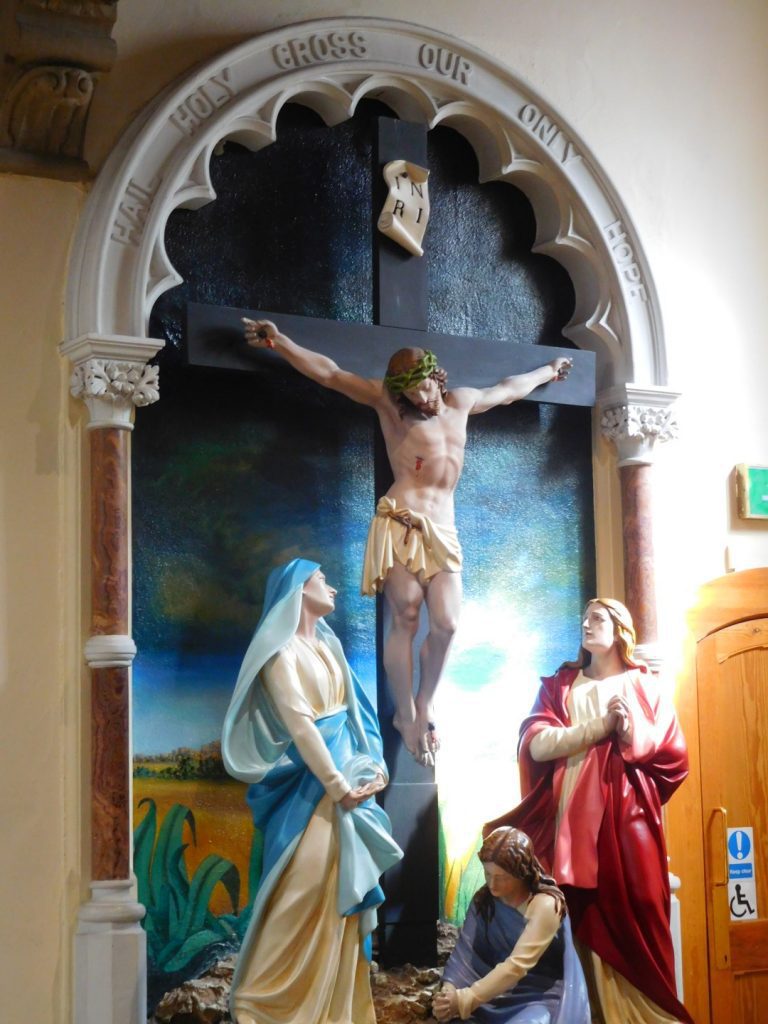 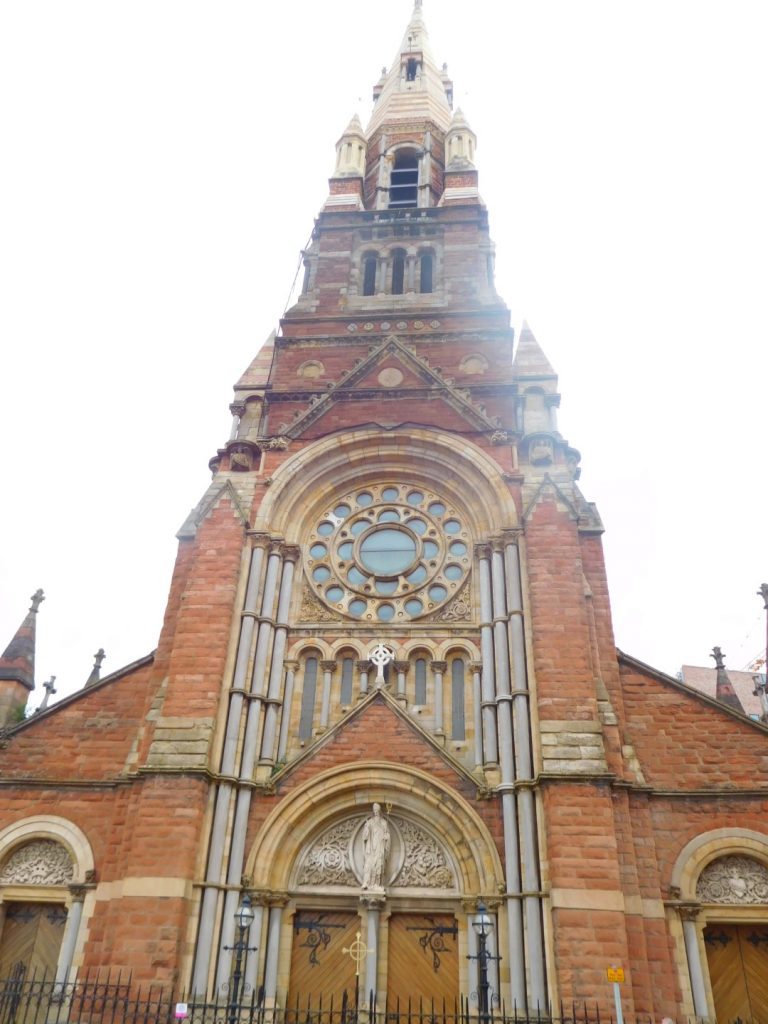 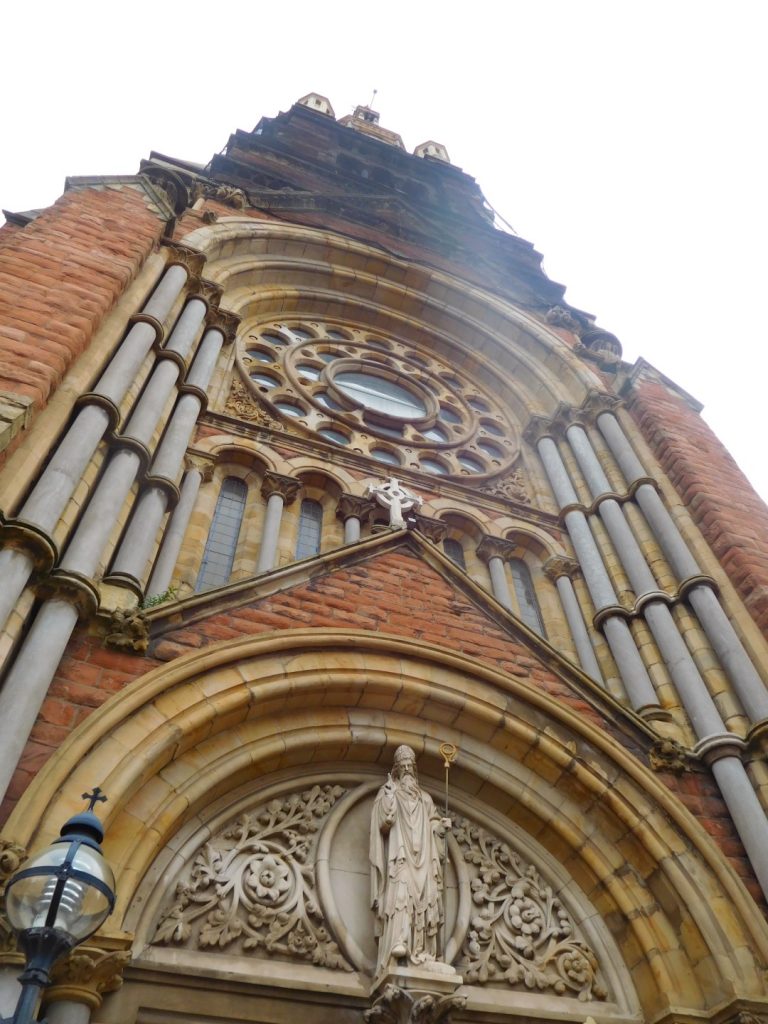 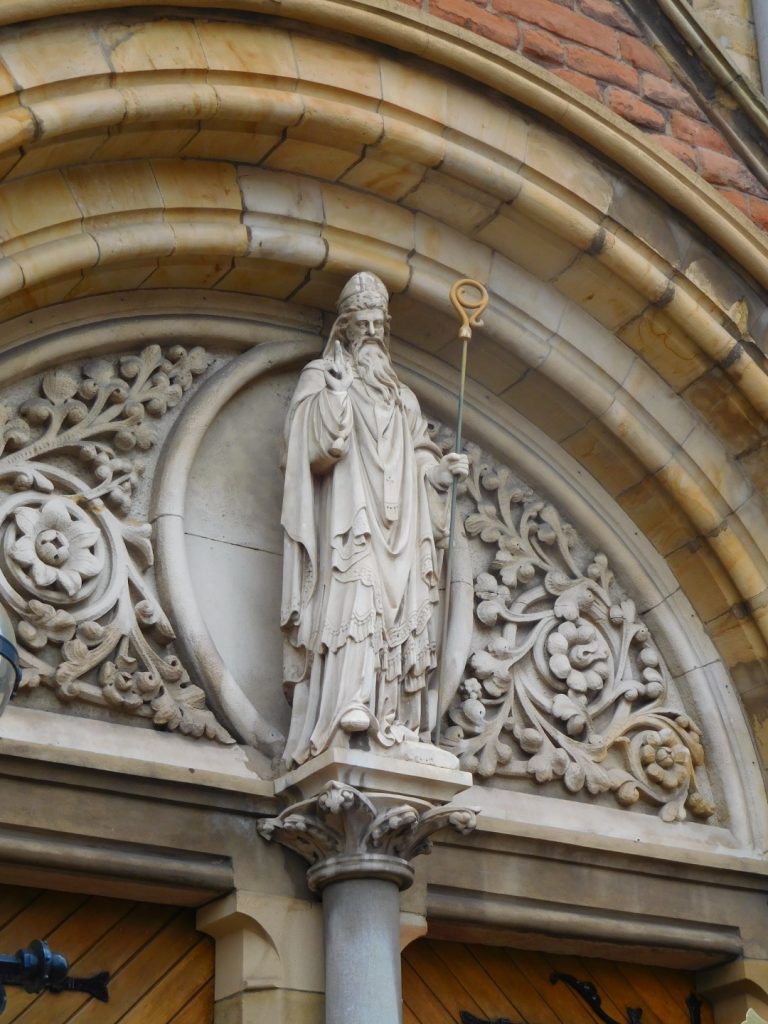 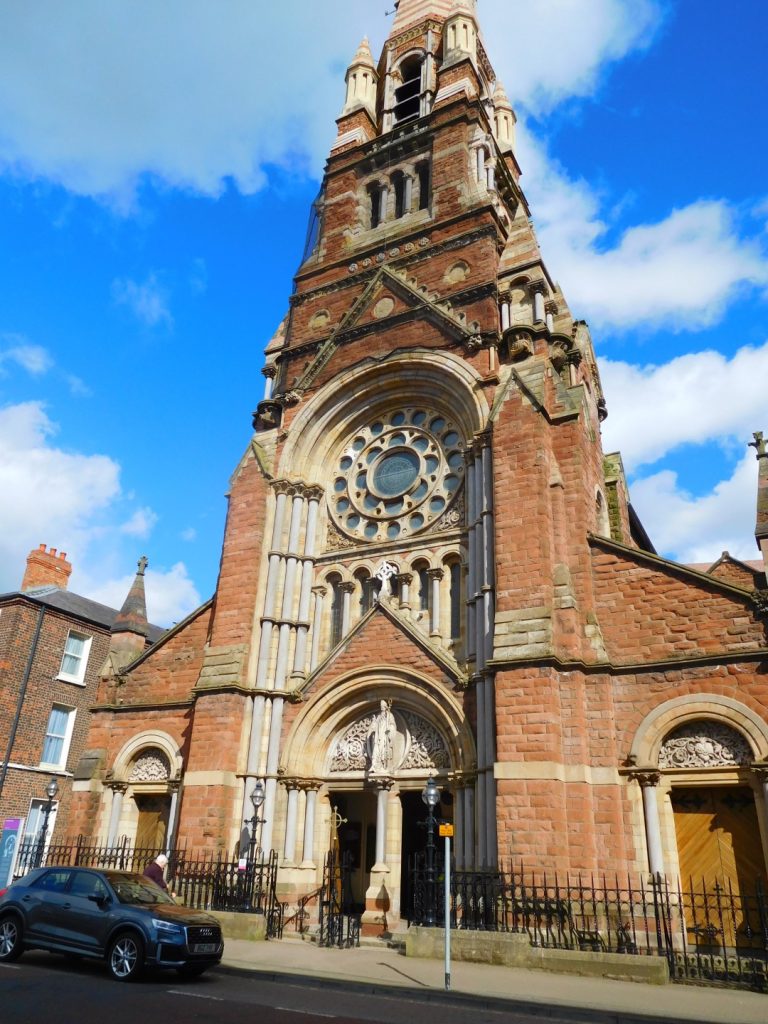 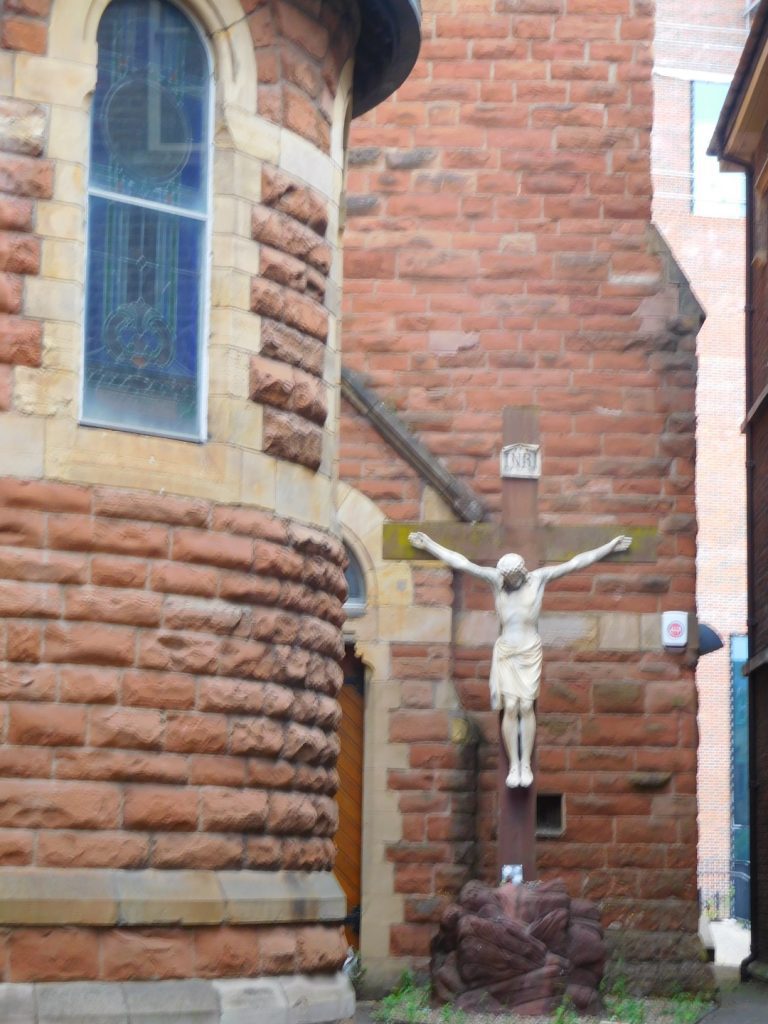 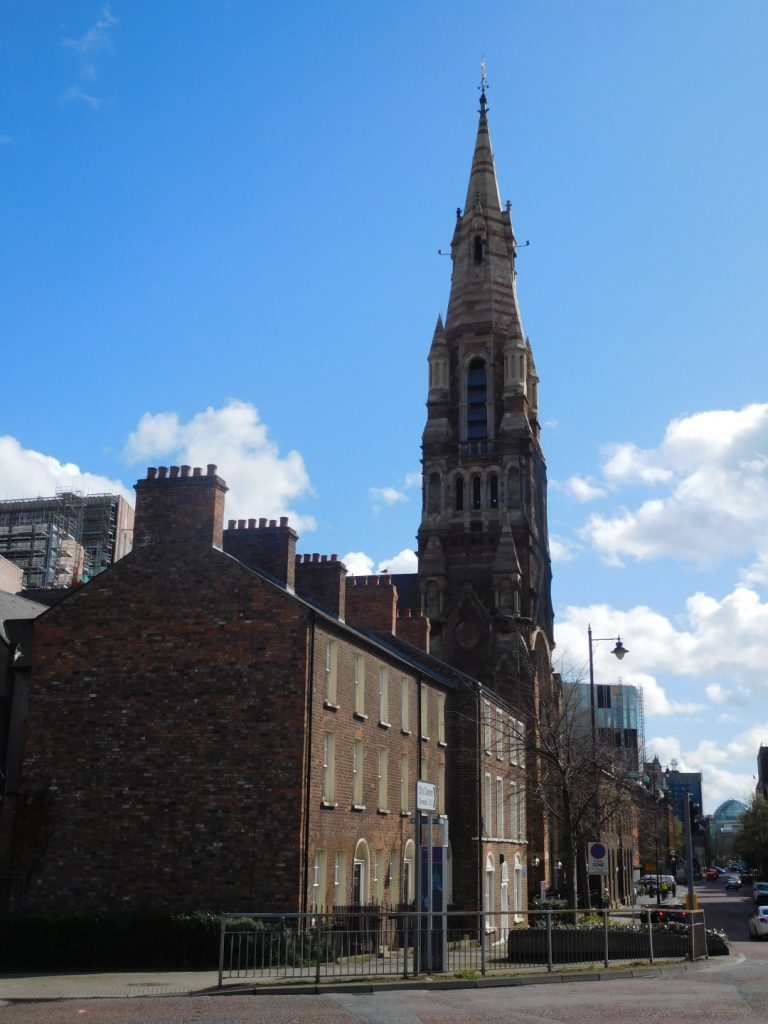 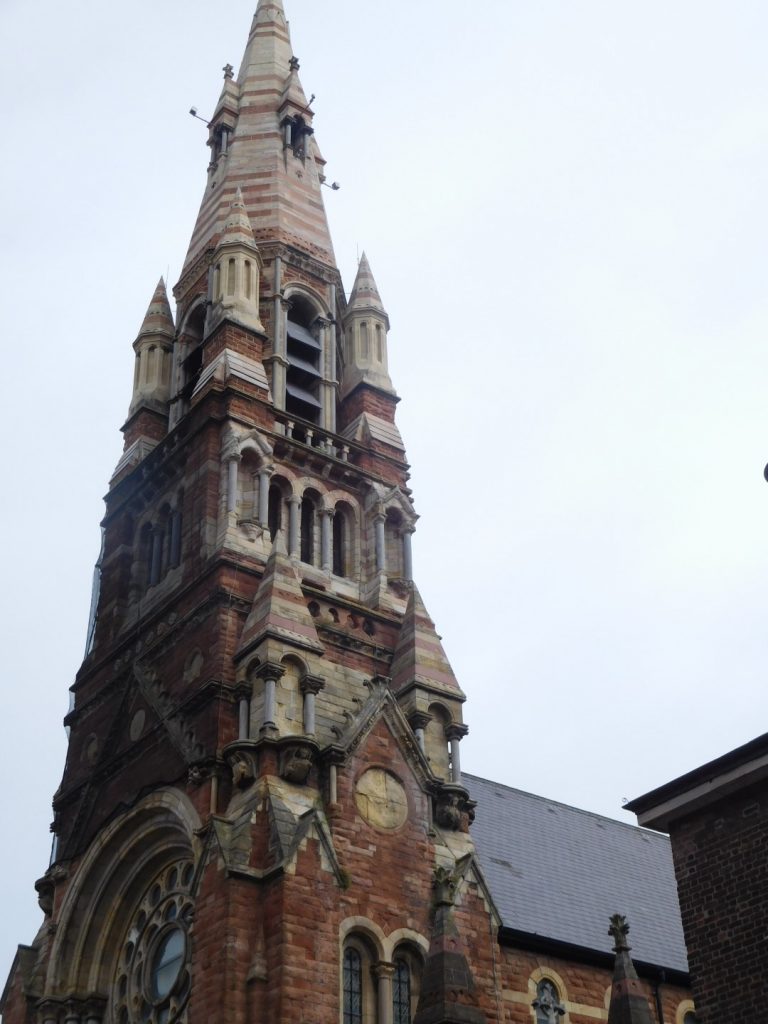 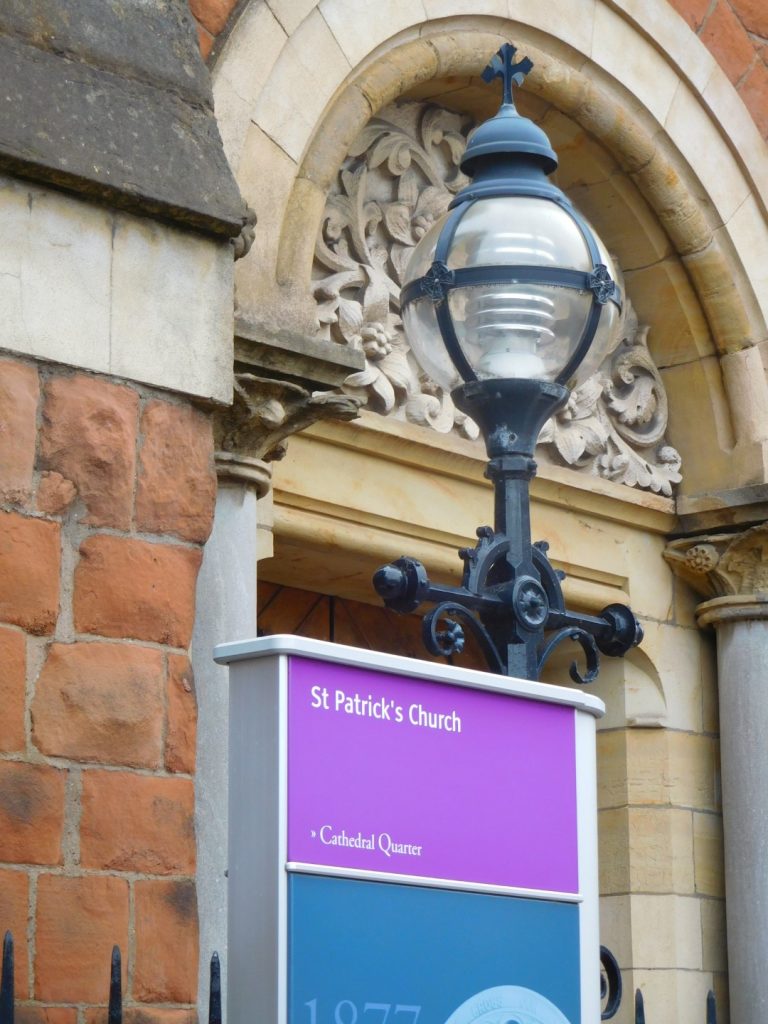 Sir John Lavery – The Belfast Painter of Peace and War

Barney Hughes will be remembered for his desire for social justice, his unstinting generosity and humanitarian reform, but also for the Belfast Bap

St George’s Church is a place of peace within Belfast’s city centre that visitors cherish, on a site used for worship since Capello de Vado