The Albert Memorial Clock – The leaning clock tower of Belfast

Construction of the Albert Memorial Clock

The Albert Clock was built as a memorial to Queen Victoria’s late husband Albert who had died in 1861. Construction work on the Albert Clock was completed in 1869 The Clock, located in Queen’s Square, is a well-known landmark in Belfast city centre. Although it’s an attractive monument in itself, the Albert Clock’s most memorable characteristic perhaps, is that it tilts at least 4ft from the perpendicular!

In 1865 the Belfast Corporation organised a competition for a memorial to be built to honour the deceased Prince Consort. In total, 76 competition entries were submitted anonymously. The Selection Sub-Committee chose the design of Newry-born architect William J Barre as the winner. The company of Messrs Lanyon, Lynn and Lanyon took second place. However, there was skulduggery afoot!

The General Committee subsequently met to ratify the competition outcome but… with Charles Lanyon attending. The General Committee decided to reverse the original award sequence with the Lanyon firm named as the competition winner and Barre as runner up. The deception became general knowledge, however, resulting in an outcry from a scandalised public. Ultimately, justice was served and Barre’s design won the day!

The Albert Memorial Clock Tower is made of Scrabo sandstone while the base is composed of Cookstown freestone. The Gothic style design has French and Italian influences. The clock tower structure reaches a height of 141ft and weighs over 2,000 tonnes.

On the west side of the square-built tower, facing High Street, is a statue of Prince Albert himself, adorned in the robes of the Knights of the Garter. Samuel Ferris Lynn sculpted this statue. The tower base is designed with flying buttresses decorated with heraldic lions, angels, gargoyles and floral motifs.

The clock tower houses a 2 tonne bell. Francis Moore of 114 & 120 High Street made the clock. The Fitzpatrick Bros. constructed the edifice. The Albert Clock construction cost of £2,500 was funded by public subscription and by John Lytle M.P. donating his Lord Mayor’s salary for 2 years.

Unfortunately the successful contractor, William Barre, did not live to see the completion of his project. He died in 1867 from Tuberculosis at his home in nearby Fisherwick Place. He was only 37.

Why does the Albert Memorial Clock tilt?

The Albert Clock is off-kilter due to the fact that it was constructed on Belfast sleech. This is the marshy, muddy reclaimed land around the intersection of the River Farset and the River Lagan. The clock tower was originally contructed on strong wooden piles, but these inevitably moved and rotted in the wet clay and could not sustain the weight of the monument. The clock tower began to tilt. As a result of the Tower’s increasing incline, various ornamentation had to be removed from the structure in 1924, for fear that the tower would topple completely.

Restoration of the Albert Memorial Clock

From the 1950’s Mr Tom Carragher was the caretaker of Belfast Council’s public clocks. He was a local jeweller and master clock craftsman. In February 1977 the clock suddenly stopped ticking – Tom had passed away just an hour before!

Over the decades the Clock Tower became blackened with pollution and became known as a haunt for local prostitutes due to its proximity to the docks. “The Albert Clock has both the time and the inclination” was a common local saying.

In 2002 a project to preserve the monument got underway. This included work to strengthen the damaged wooden foundations and to stabilise the leaning clock at its current position. The tower was cleaned and restored to reverse the effects of weather erosion and heavy traffic pollution.

Regeneration work on the surrounding streets and dockside completed transformed the vicinity into a popular pedestrianised area for tourists and locals alike with views over Belfast Lough, the marina and the Titanic visitor centre.

The restoration work on the tower and carvings succeeded in rolling back the years impressively with today’s monument back to it’s finest within a regenerated setting. The Albert Clock continues to be a reminder of the public grandeur of Victorian Belfast (even if somewhat tilted).

The Albert Memorial Clock is sited at 17 Queens Square, Belfast BT1 3FF. It is close to a number of other Belfast city centre landmarks: 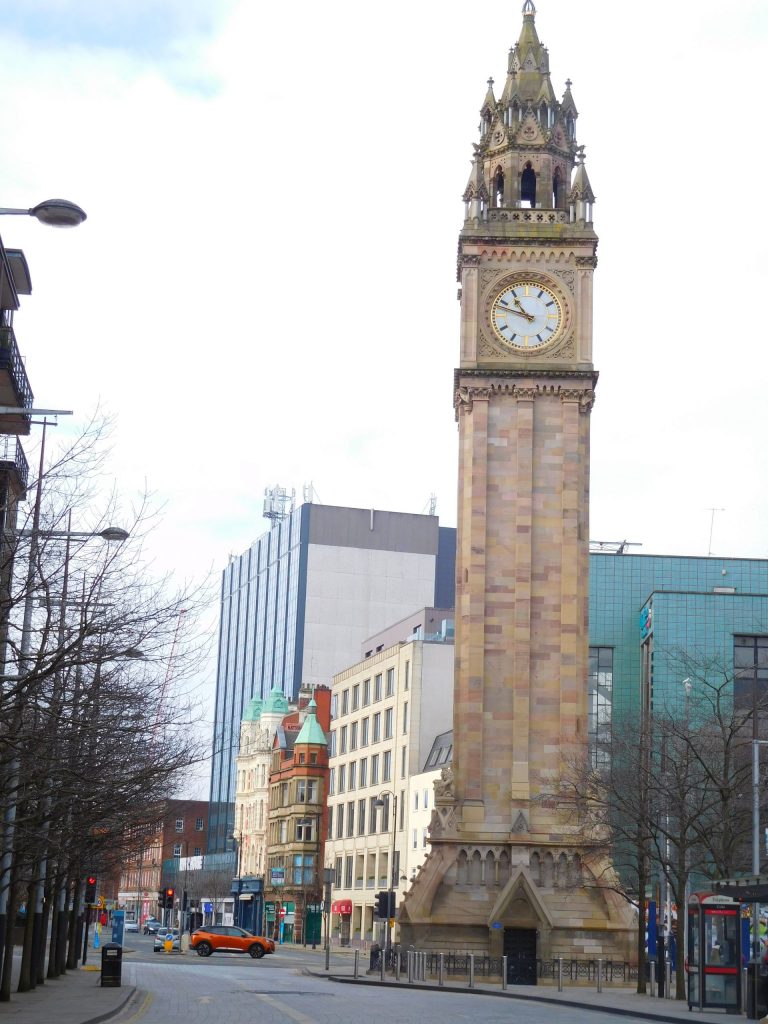