The Giant’s Ring – A Neolithic Mystery

What is the Giant’s Ring

The Giant’s Ring is a Neolithic henge monument pre-dating the Egyptian pyramids. It is situated in the townland of Ballynahatty, only 4 miles from Belfast city centre.

“(The Giant’s Ring) at once excites the interest of the visitor by reason of its antiquity and the mystery with which it is surrounded. We do not envy the individual who can walk unimpressed round its rampart, or stand beside its cromlech without feelings of astonishment and awe. It is an epic poem in clay and stone, appealing alike to the imagination and heart, not alone of the enthusiastic antiquarian, but of every lover of our native land”

The huge circular earthwork is 590ft in diameter and covers an area of 6.9 acres. The 11ft high banks (though originally they were much higher) are composed of soil and stones dug out from an interior ditch within the boundary of the circle. The earthwork enclosure is broken by 5 irregularly spaced gaps. Within the ring the banks block out any view of the surrounding landscape, only the sky is visible.

Just east of the centre is a small cairn or cromlech. This is composed of five upright stones with a large capstone. The vestigial passage faces west. These passage tombs are common throughout Ireland.

What was it for?

A scientific study carried out in 1954 proposed that the inner wall of the earthworks may, at one time, have been faced with stone. This suggests that the Giant’s Ring was not built for defensive purposes, as the stone walls and the ditch would have been on the outer edge of the circle.

It is thought that the Giant’s Ring may have been designed as a large meeting place. It is situated close to a natural fording point of the river Lagan. This site has been used as a crossing point since ancient times; it is now spanned by Shaw’s Bridge.

Another theory put forward by the archaeologist Michael J O’Kelly is that the site was based around the cult of the dead. The Neolithic tribes had a great veneration for the departed. The cairn was possibly the burial chamber of a revered chieftain, and the ringed-in circle used to host games or funereal rites in his honour.

It is not surprising that in times past, the ancient cromlech was considered to be a pagan altar, perhaps even a place of sacrifice.

“Near the centre of the circle stands a cromlech, or rude altar of stone; and whether the proofs that such monuments were used in the idolatrous adoration of the sun be, or not be satisfactory, it is a circumstance which deserves to be remembered, that the Giant’s Ring would exclude from the gaze of a mistaken multitude every object but the glorious luminary himself whose beams they worshipped”

“In the centre of this space is a Druid altar….Few things are more calculated to awe the mind and to affect the imagination than this scene, when we contemplate it as a vast heathen temple, within the circuit of which many thousands may have assembled to witness the awful rites of their sanguinary religion….”

In the seventeenth century, the area was seen as a sporting venue especially for horse racing.

“Hard to take in is the fact that the enclosed area was once used as a racecourse, or the theory that human sacrifice may have been offered here to pagan gods”

Out and About – Lagan Valley Belfast Telegraph 18th May 1960

In the eighteenth and nineteenth centuries it was common for farmers in the area of the Giant’s Ring to find human remains churned up by the plough. There was also evidence of further burial chambers. It seems that the region around the Ring had many burial sites now covered over by earth or the stone slabs removed for later building, as the Belfast Newsletter reported on 21st November 1855.

In 1841 Arthur Hill-Trevor, third viscount Dungannon [1798-1862]from Belvoir house, built a stone wall around this ancient monument to protect it and the adjacent land. In 1856 he donated some uncovered ancient pottery to the Royal Irish Academy. Other discoveries of bone and pottery went to the Natural History and Philosophical Society.

In 1855 near the Giant’s Ring, the bones of a woman were found. She was subsequently named Ballynahatty Woman. With modern scientific techniques it has been discovered that this woman lived and farmed in the area 5,200 years ago. She had brown eyes and black hair and came from southern Europe, most likely from Spain. Her DNA ancestry traces back to the Middle East. It is believed that a huge migration of peoples swept across Europe from the Black Sea region and eventually even reached our shores. It is thought Ballynahatty Woman’s ancestors came to Ireland via the Iberian Peninsula. In Spain they also buried their dead in passage tombs.

The Giant’s Ring continued to be used occasionally for festivals and meetings. One example was the Ballycairn Prebyterian Church ‘Grand Bazaar and Summer Fete’ in June 1895. There were numerous stalls and entertainment to raise funds for church projects – Art and Photographic Stall, a Flower Stall, Bran Tub and a Gentlemen’s Stall. 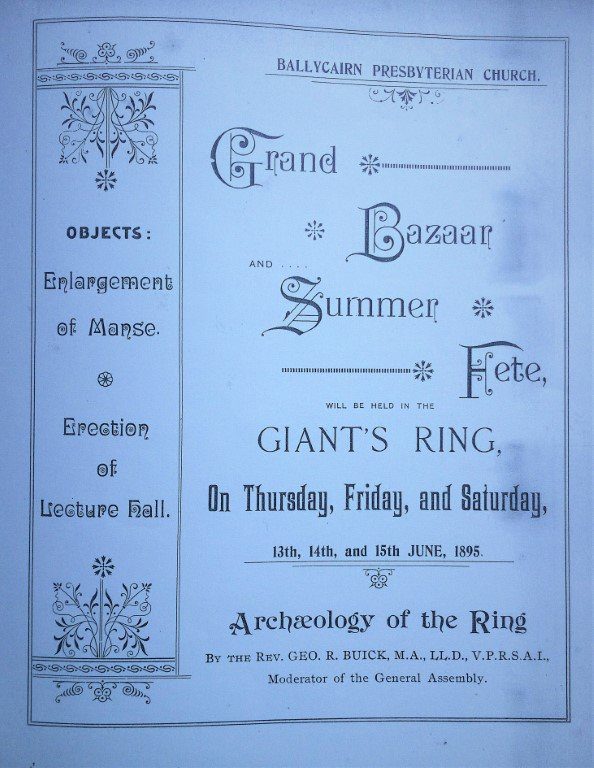 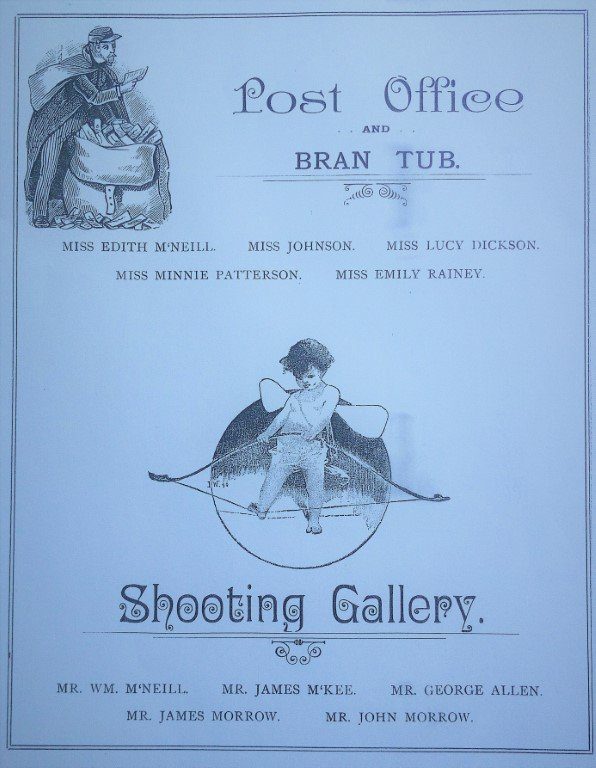 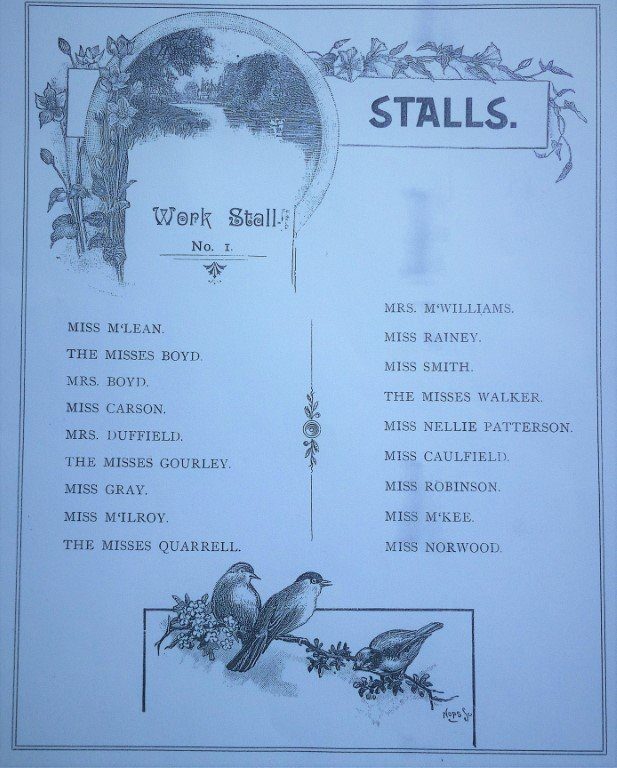 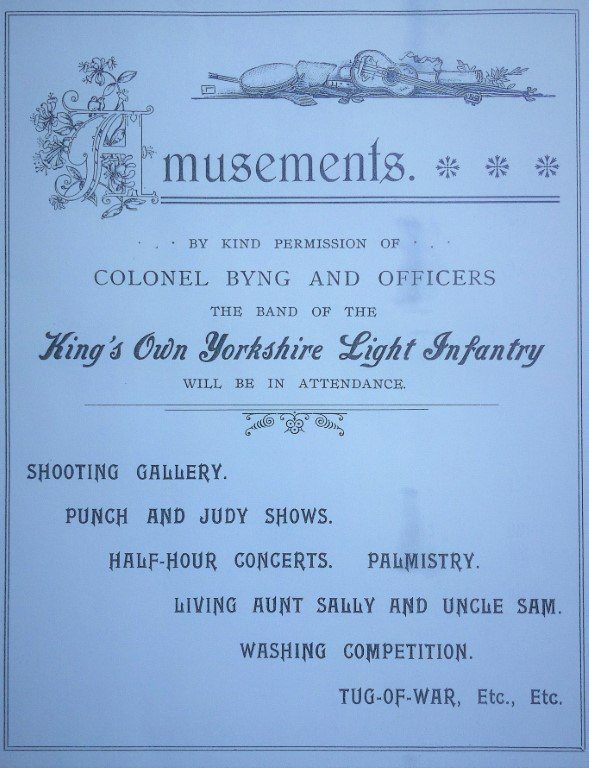 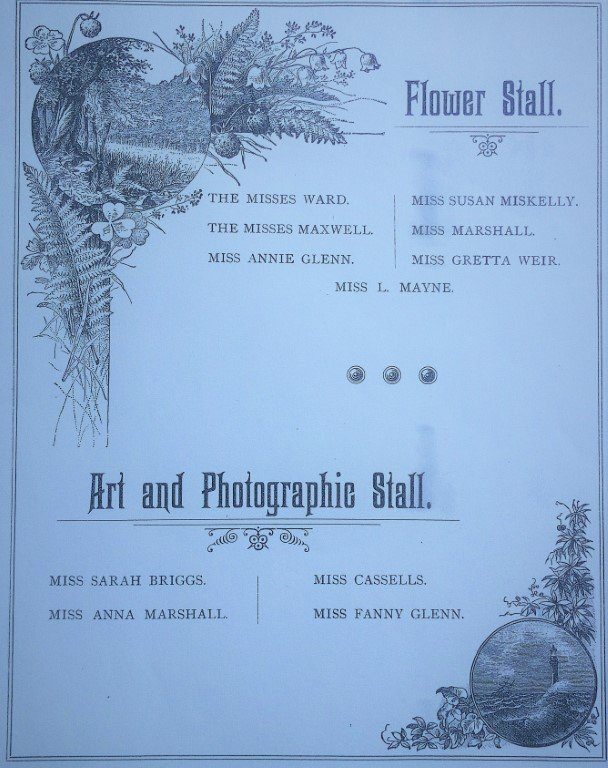 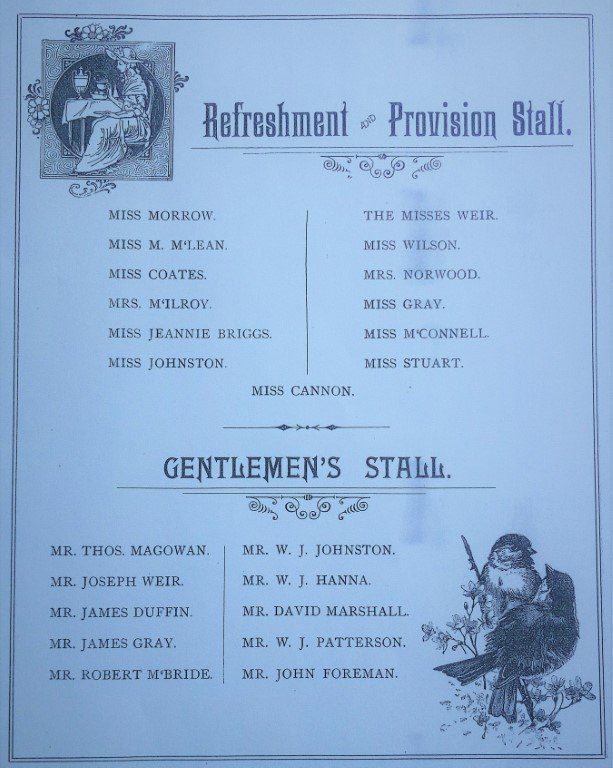 Current status of the Giant’s Ring

The Giant’s Ring is now safeguarded as a State Care Historical Monument and has an Area of Significant Archaeological Interest status. While of intense interest to antiquarians and historians the site is a lovely place to visit. It is a particular favourite of local dog walkers. Within the circle is a feeling of calm and you can almost forget that Belfast and modern day life is only a few miles away.

“The quaint iron gate guarding the entrance to the Giant’s Ring quietly and decisively lets interested visitors through, one at a time, and the mystic ring formation with the dolmen in the centre lies still and impressive before us. Time has made on it but little impression. Feelings of loneliness and sadness steal over one unconsciously, heightened by the thought that the secret of this huge ring is still a mystery to the learned” 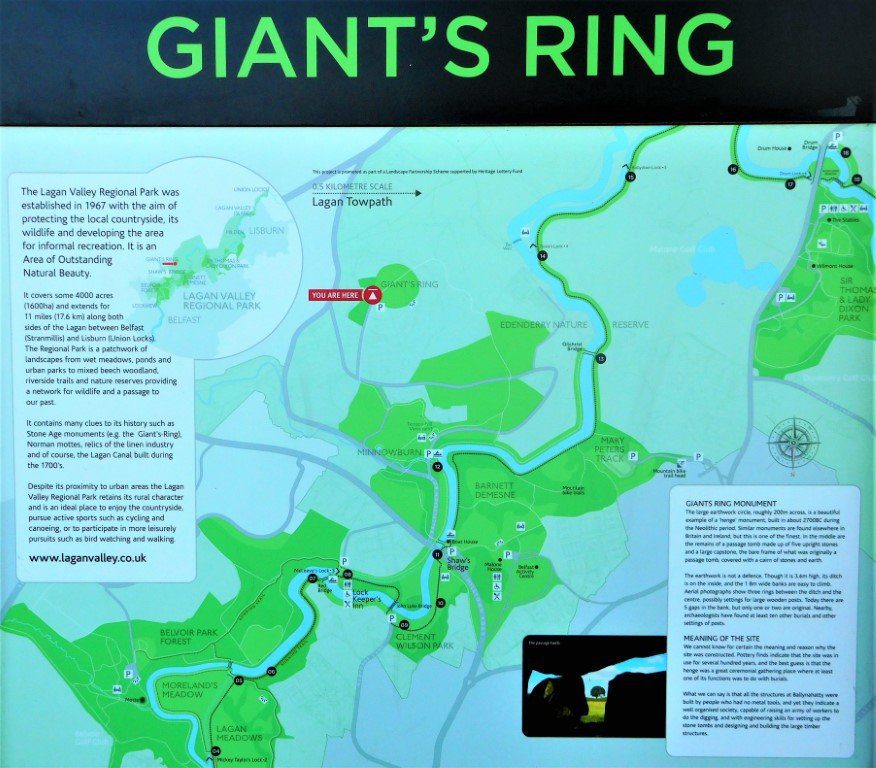 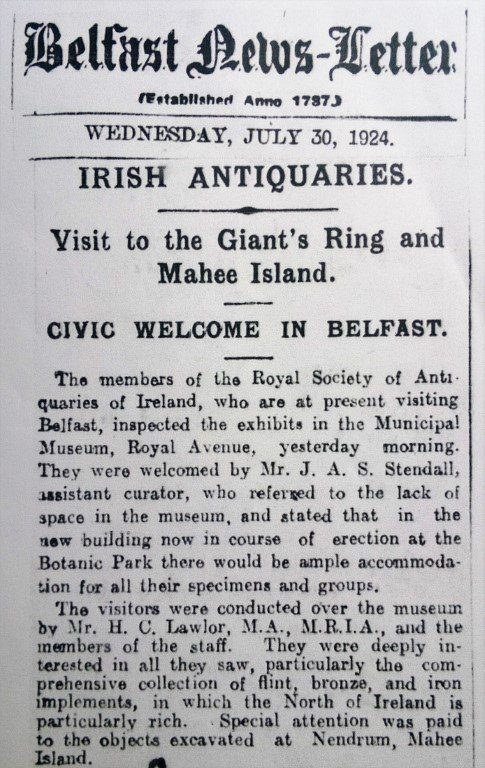 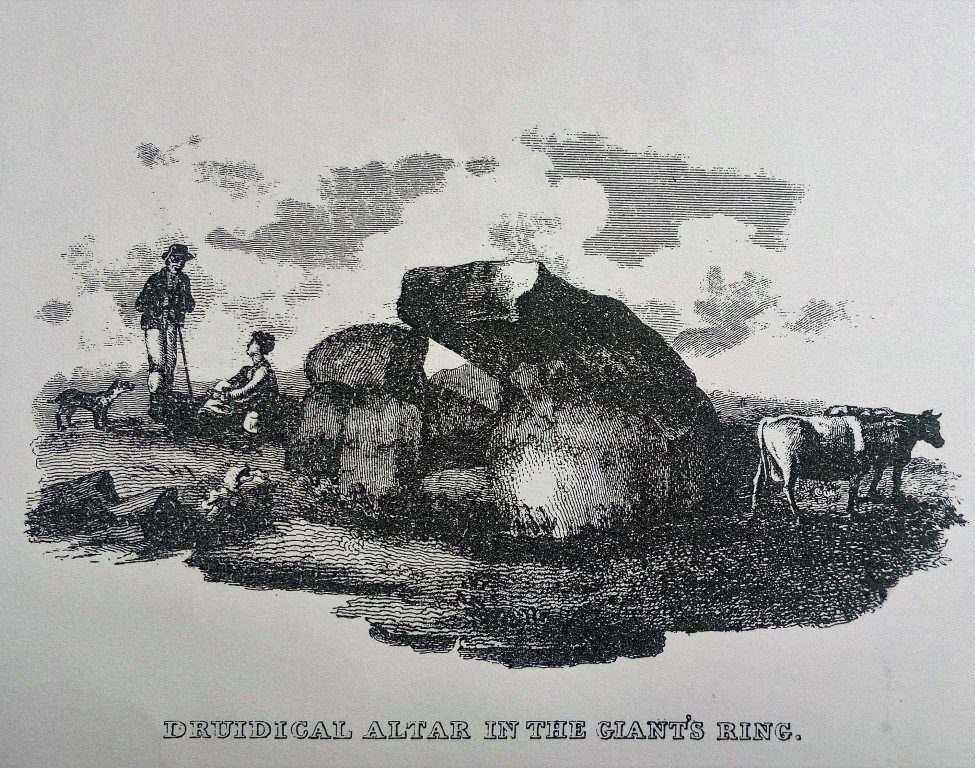 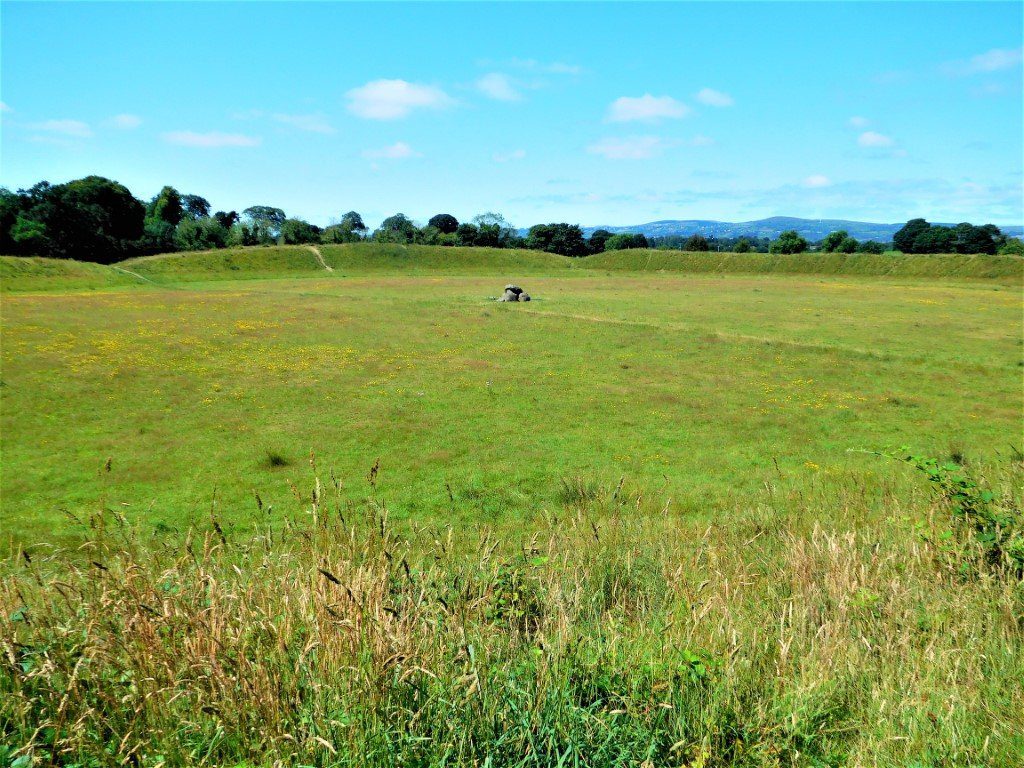 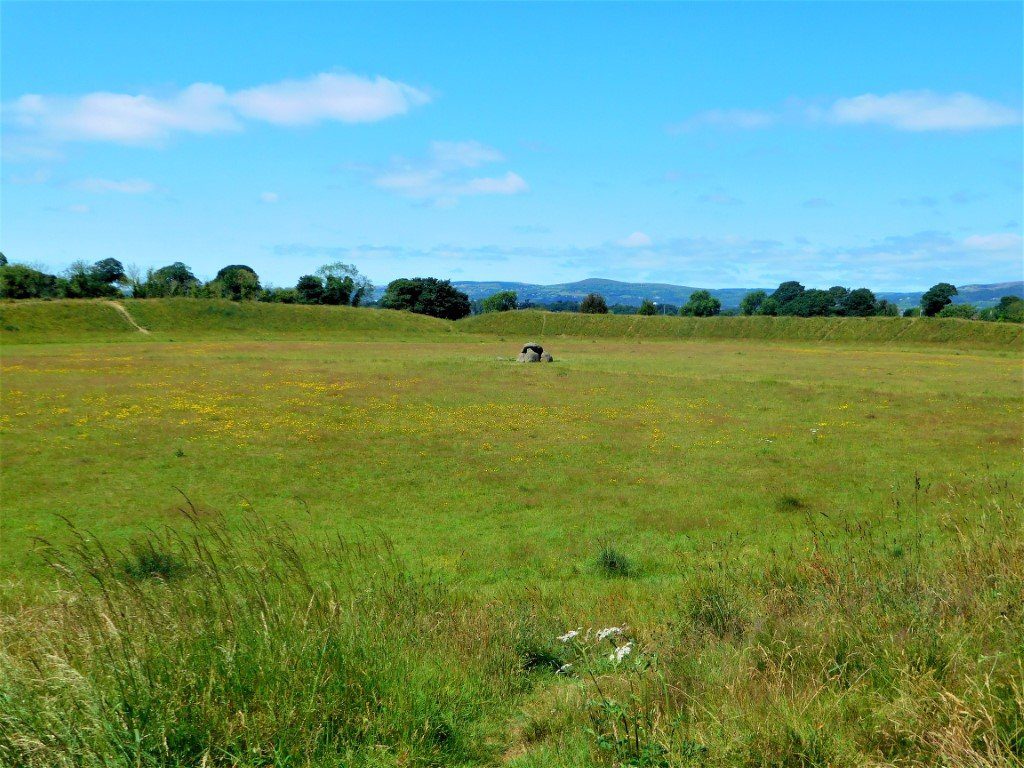 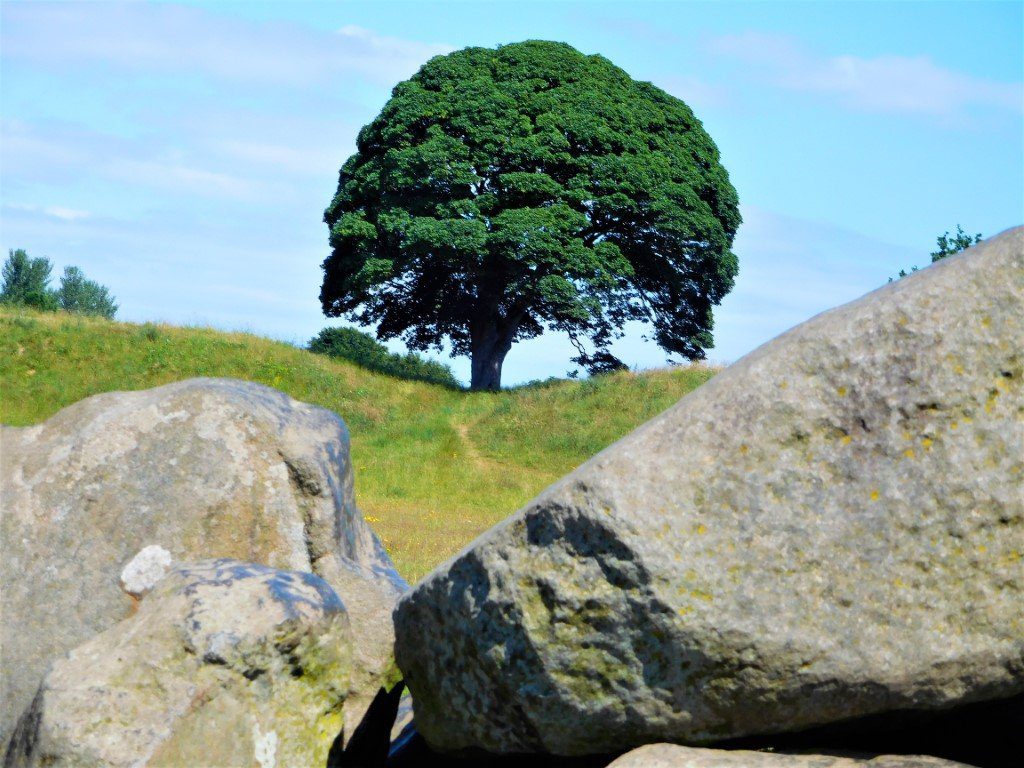 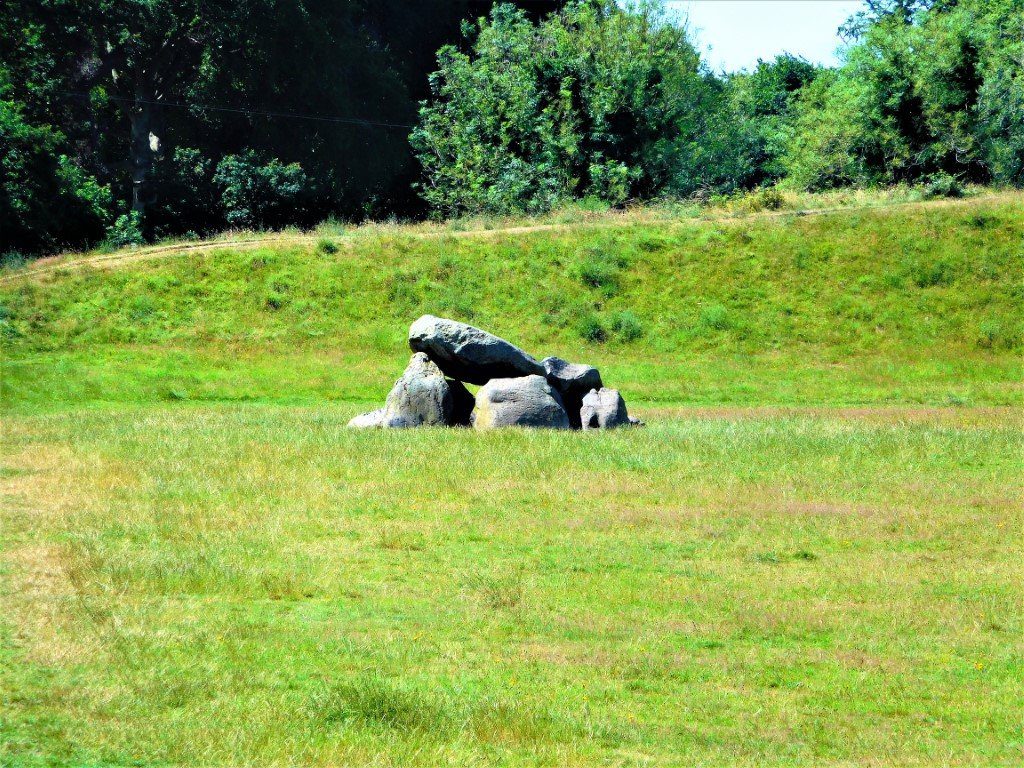 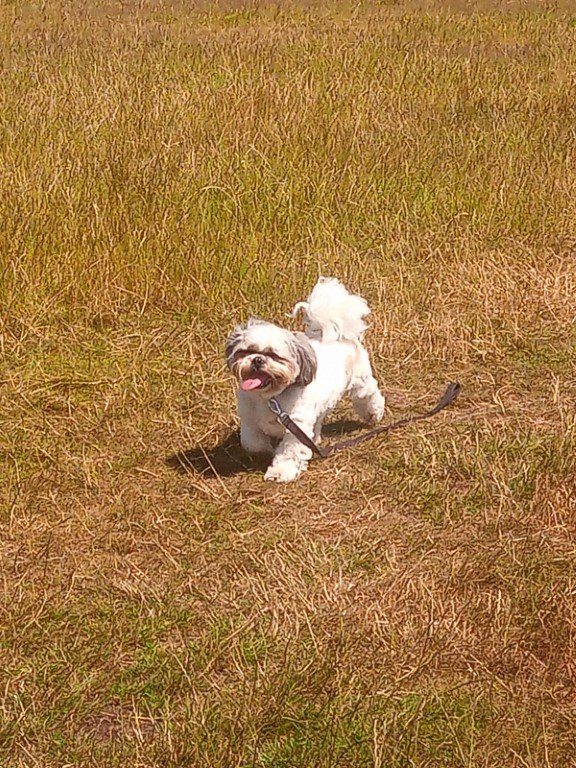 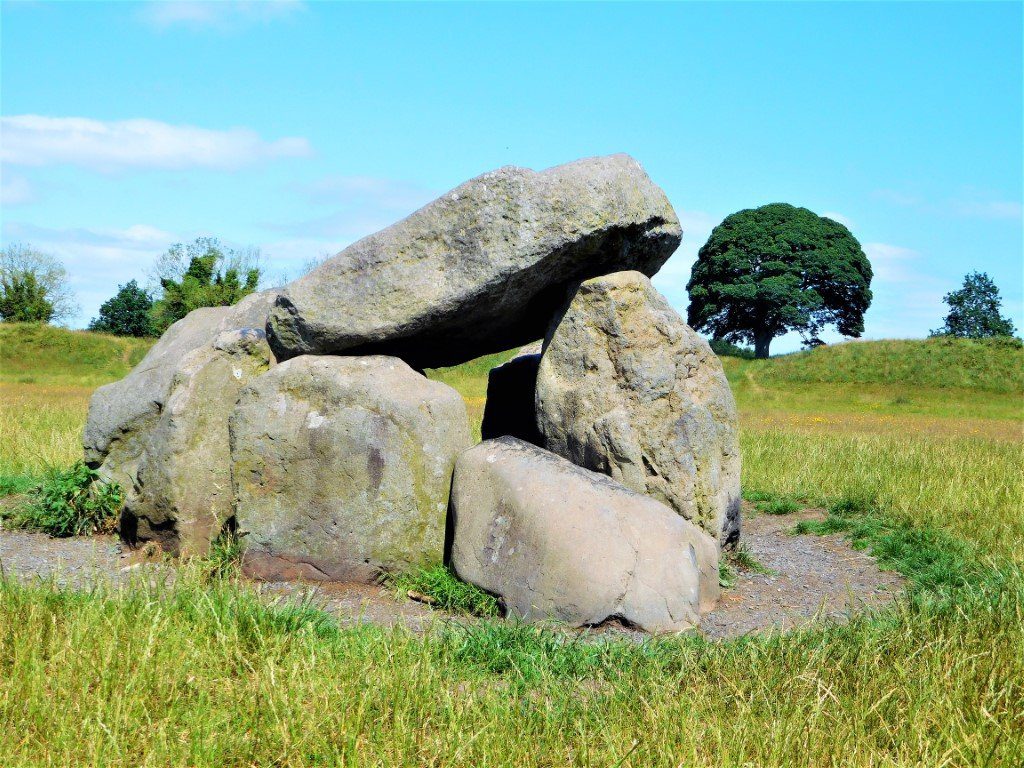 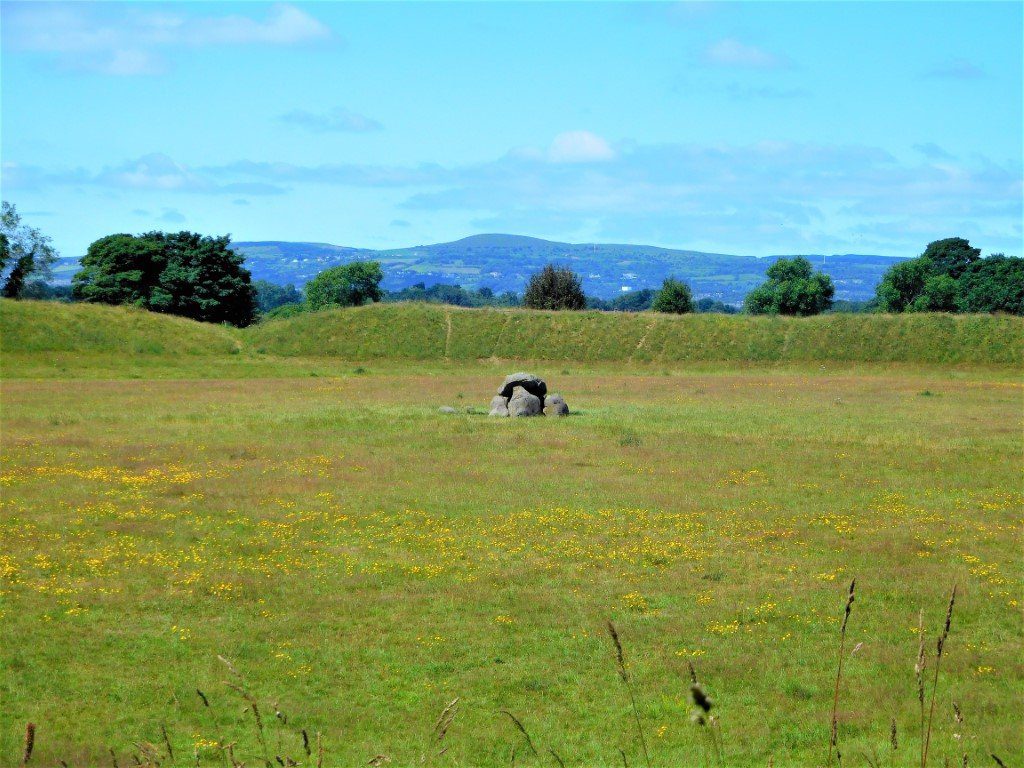 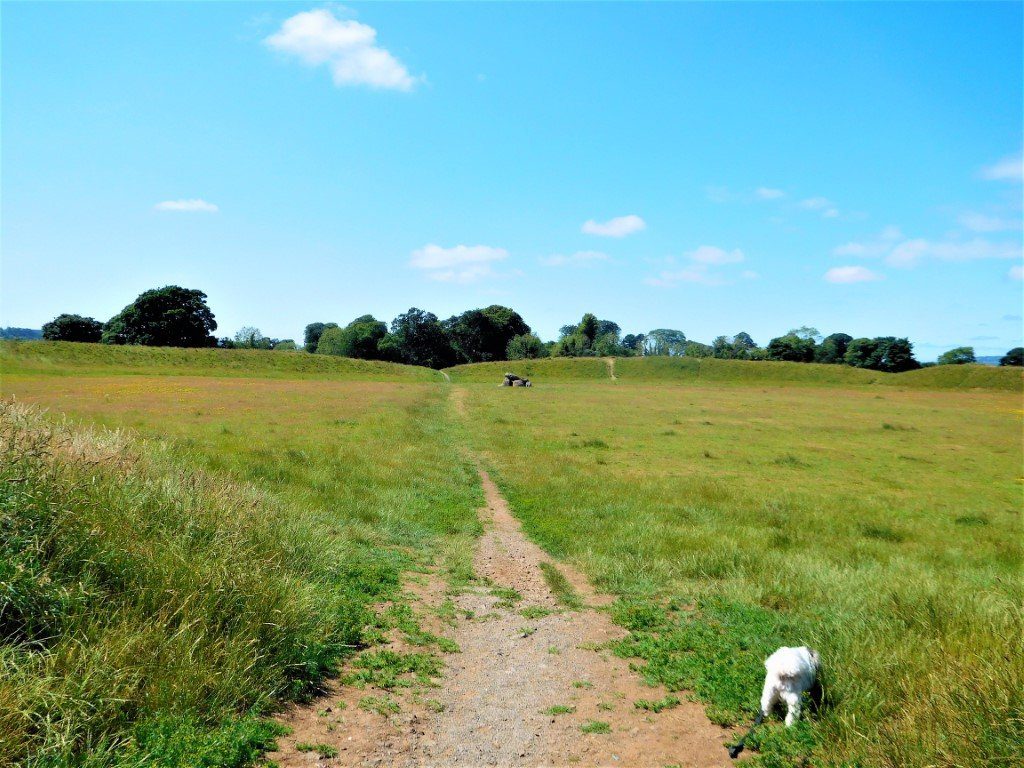 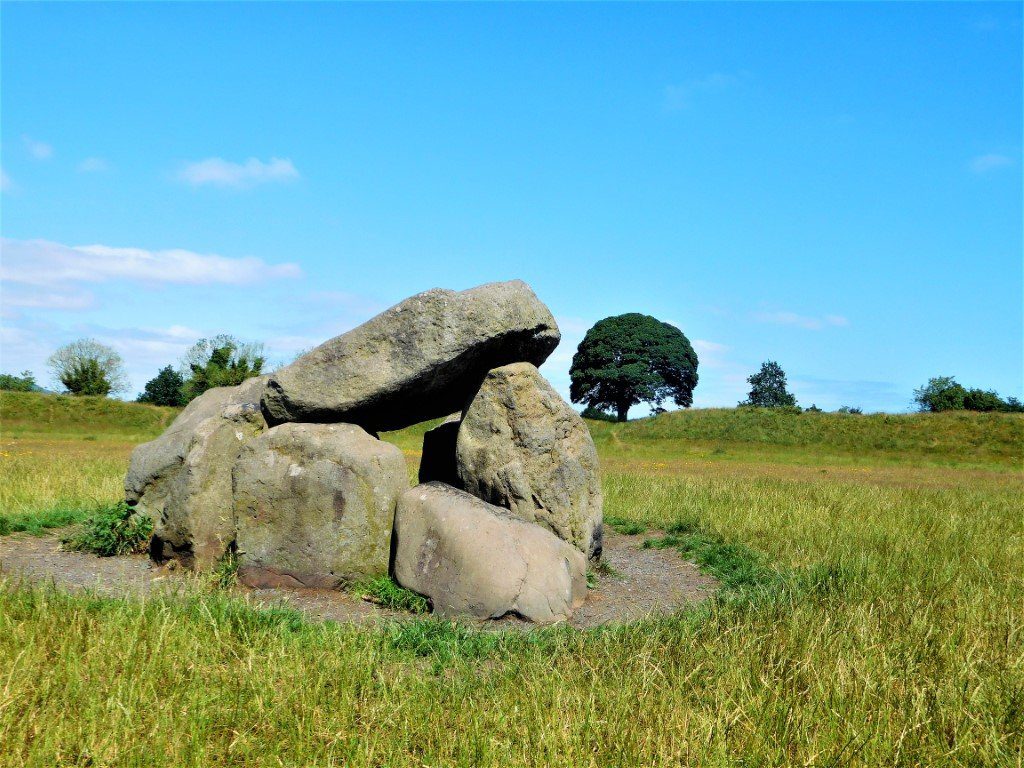 Location of the Giant’s Ring

There is no charge to visit the Giant’s Ring and there is a small free car park.

Belfast Entries is a husband & wife hobby website featuring articles on our shared history, memories and entertaining stories of our past. We hope you enjoy visiting the website.

Remember that we can only post to a specific FB group if the subject is relevant – no group will see all posts as our topics vary every week. If you like the Belfast Entries stories and want to see ALL new posts, please add us as Facebook friends by clicking the button to see new posts on your FB timeline. We will never send SPAM / unwanted messages to you.

We would particularly like to thank those who have made a donation via Paypal or the “Buy Us A Coffee” feature. Every small donation goes a little way towards covering the costs of running the website and helps us keep Belfast Entries running. We are grateful for every donation and would like to thank every contributor. We will adhere to our promise never to send unsolicited emails. Your support is appreciated.

We have 5 donations this month. 🙂

Thank you for your donations and words of encouragement

We had 4 donations last month. Thank you

A Quick Question Before You Leave

Killyleagh Castle – Vikings, Sieges, a Ghost and a Suspicious Death

The Mystery of the Cave Hill Ghost

Reported initially in 1913, the Cave Hill ghost proved a mystery and a source of fascination for years. What was the ghosts tale?

Hy Brasil – The True Story of a Mythical Island