The War Goddess of Boa Island

Nestled in a secluded little graveyard on the peaceful island of Boa in County Fermanagh, it is something of a surprise to come across – a representation of Badha, the Celtic goddess of war!

The graveyard itself dates from the early Christian period 400-800AD. The larger of the two figures is in its original location, while the smaller was brought here from nearby Lusty Mor Island, to the south.

This sculpture is believed to represent Badha, goddess of war. The name of the island Boa is derived from the Irish ‘Badha’ (there are several variations in spelling) who was the Celtic War Goddess or ‘battle fury’.

Badha is sometimes represented as an old hag and at other times as a hooded crow – the harbinger of death. It is said that Badha, in the shape of a raven, sat on the shoulder of Cuchulainn after his death in battle.

The Boa figure has a face and torso on both sides, similar to the Roman Janus god. The features are intertwined with a design thought to represent hair. One side of the carving is male and the other female. In some accounts Badha is also associated with childbirth, her twin aspects reflecting both creator and destroyer.

Others suggest a fertility interpretation

“This ‘mating’ presumably enhances the generative quality of the stones, but megaliths by themselves were held in great veneration as givers of fertility and also as curative agents”

The faces on the Boa statue are large with wide oval eyes and open mouths. The arms are crossed over and both sides wear a belt. The figure is not large – about 29 inches tall and 18 wide. There is a groove on the top of the head; its original purpose is unknown, perhaps for holding antlers. Today visitors leave tokens and coins here for good luck.

The Lusty Mor statue is slightly smaller and more weathered. It was moved to this location in 1939 after it was discovered buried in an old graveyard. Although female this statue is often referred to as “Lustyman“. It appears to have only one eye.

Both representations are made of local sandstone. Some archaeologists believe this older statue to be the forerunner of the Sheela-na-gig. These were grotesque carvings of females whose purpose is thought to have been to ward off death, evil spirits and demons.

Origins of the Statues

The exact date of the carvings is still uncertain, probably from either the Iron Age or the Bronze Age.

Most historians think the idols pre-date the Christian burial site and that this was originally a sacred grove dedicated to a pagan deity.

Others claim the Boa Island statues represent a cross-over period when early Christians were ‘hedging their bets’ by including earlier beliefs and religions in the new Christian setting.

The disproportionally large heads of the figures is said to represent the ancient Celts belief that a person’s spirit or soul was contained in the skull after death. This resulted in the gruesome practice of severing heads as battle trophies. 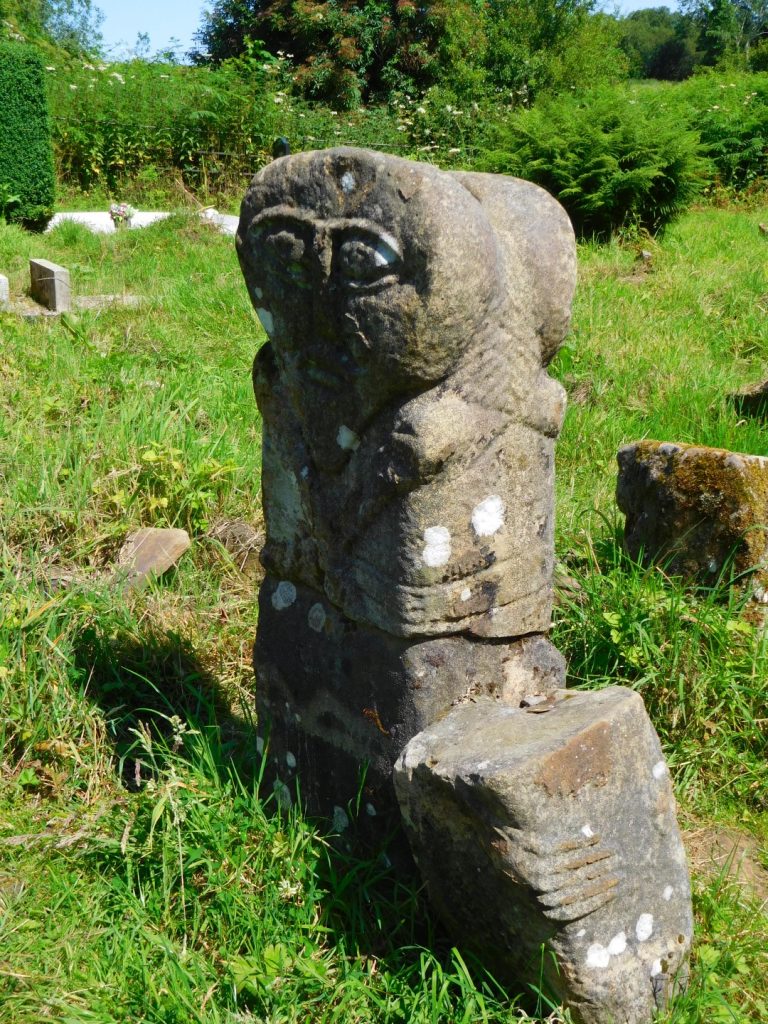 Boa Island is the largest island in Lower Lough Erne at nearly 5 miles long. The island was joined to mainland Fermanagh in the 1920’s by a bridge at either end.

The area is a popular destination for holiday makers especially walkers, fishermen and water-sport enthusiasts. It is a beautiful location. However not everyone has been impressed by the island’s natural charms in the past:

“Boa Island is the largest of all those on Lough Erne….and has an area of fourteen hundred acres. Seen from a distance, it is decidedly picturesque in appearance. It is fertile and broken up into farms. It does not, however, improve upon acquaintance, and a distant view is all the visitor need require”

Driving on the island offers beautiful views and, not far from Caldragh Cemetery you can watch the LustyBeg ferry travelling backwards and forwards between Boa Island and its smaller Lusty Begs companion.

A visit to Boa Island is perfect when combined with a picnic, a tour of the lakelands or a stopover in nearby towns. The island has numerous historic sites. The oldest monument discovered so far, is a cairn at Inishkeeragh Bridge at the southern tip of the island. In the townland of Dreenan there is also a counterscarp rath. This is the outer defence wall for a rath or fort, the strongholds of Irish chieftains. There are 11 raths on the island.

At Caldragh Cemetery there were the remains of an early ecclesiastical enclosure, but these no longer survive.

References to the Boa Island sculptures in literature

Fermanagh; half in and half out
of whatever its element is,
never quite sure at any time
whether it’s one thing or the other,
land in water or water in land,
but amphibious like me amid
the fluencies and insularities that
lie even deeper than land or water and
host here in this graveyard by the lake
among the tussocked and hummocked graves
of Boa Island’s Christian dead
to a squat twin-headed stone idol
that was looking two ways long before
I knew that there were two ways of looking
upstream to a source and downstream to the sea.

Then I found a two faced stone
On burial ground,
God-eyed, sex-mouthed, it’s brain
A watery wound.
In the wet gap of the year,
Daubed with fresh lake mud,
I faltered near his power –
January God.
Who broke the water, the hymen
With his great antlers –
There reigned upon each ghost tine
His familiars,
The mothering earth, the stones
Taken by each wave,
The fleshy aftergrass, the bones
Subsoil in each grave.

Boa Island is around 88 miles from Belfast and 16 miles from the historic county town of Enniskillen.