Carnmoney Hill lies 6 miles north of Belfast. It rises to a height of 761ft allowing beautiful views over the city, shoreline and Belfast Lough.

The hill is a mixture of ancient woodland, flower meadows and marshlands. The eastern third of the hill is owned by Newtownabbey Borough Council and is a popular walking and hiking area with trails and paths suiting different abilities.

The Woodland Trust have planted 60,000 native trees on the slopes of Carnmoney Hill including rowan, silver birch, beech and ash. The autumnal colours are wonderful.

The hill is also home to hares, foxes and badgers as well smaller animals.

The abundance of butterflies, dragonflies and insect life attract a wide range of birds such as chaffinch, bullfinch, robins and blue-tits and bigger birds – long-eared owls, sparrowhawks and buzzards.

We began our walk on Dunanney Lane just off the O’Neill Road in Newtownabbey, County Antrim. The area is said to be named after the Celtic goddess Aine.

Dun Aine in Irish meaning Aine’s fort. Aine is the goddess of summer, love and fertility. She is associated with crops, animals and agriculture. The gorgeously scented wildflower Meadowsweet is said to be her dedicated plant.

(Incidentally, another source claims the name “Dunanney” could mean ‘fort of public meetings’).

“If this is correct, fairs and public games were once held here and local chiefs were accustomed to assemble at Dunanney in a primitive parliament”

There is a substantial ancient rath or ring-fort thought to date from 500 BC on Carnmoney Hill. However, it is situated on the southern slopes on private land.

Robert Armstrong in his book Through the Ages to Newtownabbey describes the old fort as an elliptical earthen enclosure measuring 94ft at its largest point. The summit is encircled with a parapet. It was one of a chain of forts from McArts Fort on the Cavehill, Fairy Knowe, Dunanney to Knockagh.

“Perched high above Carnmoney Cemetery on the south side of Carnmoney Hill stands the remains of this ancient fort which gives its name to the townland. It is easy to understand why it was used by people in those far-off days as a place for an assembly, because from this site one can survey for miles in all directions”

Robert Armstrong   Through the Ages to Newtownabbey   1979

Also discovered on the hill are a number of souterrains, old stone-lined chambers and tunnels.

Heading up the Carnmoney Hill

Not far up Dunanney Lane is a limekiln, a common sight throughout Ireland and part of our industrial heritage. A kiln is a furnace or oven for burning, baking, or drying something, especially one for firing pottery, calcining limestone, or baking bricks.

As the kilns were double-chambered and had to be accessed both at the top and the bottom they are usually found dug out of hillsides. The quarried lime stone was broken up into fist-sized pieces by hand and transported to the local kiln by horse and cart or by wheelbarrow.

The limestone was laid on top of an iron grate in alternating layers of coal or turf. A fire was lit in the underneath stone chamber. When heated through for a long period quicklime is produced. This burnt lime was mainly used to improve soil conditions but was also made into mortar, utilised in the tanning industry, used for pest control and also for white-washing cottages to make them water-proof.

There are at least 10 limekilns on Carnmoney Hill, taking advantage of the chalk seam of white limestone present under the ground.

Remains of the House

Further up the lane are the ruins of an old farmhouse known as Dunanney Farmhouse.

This dwelling place on the slope of the hill has far reaching views to the north and east. While the walls have tumbled down, the location of the rooms, windows, hearth and outbuildings are still clearly visible.

The farm is recorded on an Ordnance Survey map of 1833. It was originally a one-storey, two-roomed habitation. Over the years extra rooms were added and an upstairs level. Sheds and barns and a separate limekiln were added to the site.

In Griffiths Valuation in 1862 the property was rented by a John Thompson. It is listed as a house, office, land, limestone quarry and kiln and blackstone quarry.

By 1901 John’s son George and his family are living in the farmhouse. George had married Martha Henderson in November 1884 at Alfred Street Presbyterian Church. Martha was the daughter of Edward Henderson a farmer from Ballyduff. The couple had 6 children, 4 sons John, Edward, George and Joseph and 2 daughters Agnes and Martha.

At this time the home was rated as a 2nd class house. The walls were composed of stone and the roof of slate or tile. There were 3 front windows and 6 rooms. The outbuildings consisted of a stable, a harness room, a cow house, a piggery, a fowl house, a boiling house (for boiling potatoes for animal feed), a barn and a shed.

In 1911 the family are in the same property. George died on 7th February 1915. The executors of his will are his widow Martha and son George.

George lived in the family home up to 1961 when he passed away. The executor was his unmarried sister Agnes.

Unfortunately, some time later the house was destroyed by an accidental fire and was never rebuilt. The actual date of the fire varies in different sources with some saying the fire occurred in the 1960s while others recall the house occupied well into the 1970s.

The remains of this vernacular home give us a real insight into what it was like to live and work on the slopes of Carnmoney Hill in the eighteenth and nineteenth centuries. Beautiful, peaceful scenery but a demanding life.

Keeping to the path as it slopes down through the woodland, you come across a surprising sight – A Victorian brick-built water fountain.

In past times the hills in this district were more widely populated than today. Many families lived in the local caves which have since been filled in. This well channelled one of the local mountain streams, providing water for the inhabitants and their livestock.

Tucked in a little glen the sight and sound of the fountain is charming. A good place to let thirsty dogs have a goog drink. Scotty found it very refreshing!

The paths on Carnmoney Hill are well laid out but suitable footwear is recommended especially in the winter months as the pathways can be muddy and slippery in places.

There is a small carpark off the O’Neill Road, Dunanney Lane entrance (next to the garage) with room for 4-6 vehicles.

For an unspoilt nature walk with magnificent views it is a good place to visit whatever the season.

“With awe-inspiring views of the city, Belfast Lough and the coast, Carnmoney Hill is a must visit. Steeped in history and folklore with a mix of ancient woodland, floral grassland and wetland, it is a home to a wealth of wildlife and has a wide range of walks to suit all abilities. With easy access from Belfast, and plenty of interest for keen flower and wildlife spotters as well as history buffs, Carnmoney Hill is a great destination for a day out”

The true story of ‘white witch’ Mary Butters, her attempt to cure a bewitched cow and her subsequent prosecution in court.

The Forgotten Town of Coole & the Church of the Holy Evangelists

The story of Coole parish includes a forgotten town, supernatural pacts, philanthropy & the history of the Church of the Holy Evangelists 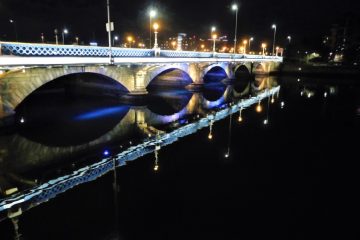 A walk around Belfast in the run up to Christmas with photos of the city centre, the Christmas Market, Laganside views and Botanic Gardens 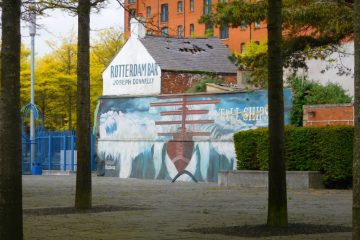 A walk with Scotty around Belfast's Sailortown, the Lagan side, the Big Fish, Queen's Square and Clarendon Dock 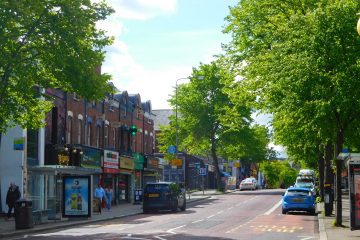 Belfast – A walk around the Queen’s Quarter