How a Belfast Company helped defeat a killer disease

In the seventeenth and eighteenth centuries poor nutrition and the lack of a balanced diet were responsible for illnesses that are now, thankfully, uncommon throughout most of the world.

One of these diseases was scurvy.

This is the story of how one Belfast firm was destined to contribute greatly in reducing the impact of this fatal disease.

The disease scurvy, also known as scorbus, has been recorded since Egyptian times. It was the scourge of sailors and is estimated to have cost very many lives…

Scurvy was a devastating illness that could, in days past, be expected to claim at least half the crew on any long voyage. Scurvy was responsible for more sailors’ deaths than shipwrecks, battles and all other diseases combined.

Scurvy is caused by a lack of Vitamin C which is normally found in fresh vegetables and fruit, especially citrus fruits such as oranges, lemons and limes. The best vegetables containing this Vitamin are red peppers, broccoli and tomatoes. Vitamin C produces collagen which holds cells together, without this the body basically disintegrates.

Scurvy would first display itself as extreme fatigue and aching joints. This would be followed by swelling, tenderness and bruising. Gums would putrefy resulting in tooth loss and blotches appear on the skin due to internal bleeding. Wounds would fail to heal and old wounds reopen. Jaundice, fever, convulsions and neuropathy were other signs. It would also cause personality changes as it ravaged the mind. Finally a sudden haemorrhage near the heart or brain would cause death. Scurvy was a truly horrific way to die.

In 1753 a ship’s surgeon, James Lind (1716-1794) from Scotland, is credited with discovering that the ingestion of Vitamin C could cure scurvy and prevent it in the first place.

He was one of the first proponents of on-board hygiene, good ventilation below decks and healthy nutrition. Citrus fruits in huge amounts were loaded on board ships before long journeys. This is the origin of the nickname ‘limey’ referring to British sailors.

However, in the age of exploration, colonisation and warring empires, it was essential for governments to have a full complement of fighting-fit sailors. Navies regularly crossed the Atlantic, Indian and Pacific Oceans, entailing a voyage of at least 3 months.

In the days before refrigeration the provision of fresh food for an extended voyage presented a significant challenge. Ships set sail with plentiful supplies but the fresh food rotted on long journeys with scurvy again a threat.

If the expansionist ambitions of the seagoing Empires were to be realised it was essential that new techniques for food preservation were developed.

In 1840 Mr Edwards, who was in partnership with Messrs Frederick King & Co invented a process to preserve potatoes through a process of desiccation – the removal of all water/ moisture. The preserved dry potato mix needed only to have boiling water added to produce a helping of mashed potatoes.

Within a short time Edwards’ Preserved Potatoes was in huge demand worldwide. In 1843 the Admiralty of the Royal Navy secured large quantities of this unique product for British seamen.

“The first operations engaged in by the firm embraced the preserving of the indispensible vegetable, the potato, and this feat was so successfully accomplished that, but a short time after its introduction, Edwards’ Preserved Potato, which is known and esteemed throughout the world – had obtained an assured and permanent position in the favour of the shipping fraternity, and of all other callings and communities wherein a difficulty had hitherto been experienced in obtaining a supply of the succulent ‘tuber’ in a state of freshness”

Medical and scientific reports from the time record the immense value of the Edwards’ Preserved Potato for naval and military use as well as for the general public.

“The advent of the (Edwards’) preserved potato….is the fact that, by the peculiar method of its preparation, it retains all the valuable mineral salts of such high anti-scorbutic worth….”

American military records of the time also demonstrate a reliance on the Edward’s desiccated potatoes:

Frederick King & Co had offices at 26 Waring Street, Belfast. They also had large potato farms at Ballyherly, just north of Portaferry in County Down.

In the Valuation Books of 1885-1898 the company is listed as owning or renting land 3, 4c, 6 and 8 in the townland of Ballherly. Here they grew their potatoes from seed and had their:

“extensive and perfectly equipped works, fitted with every special appliance for the preparation of the preserved potato under conditions of the utmost cleanliness and hygienic perfection”

Industries of the North

In 1898 the firm moved premises to Union Street and by 1905 had opened another factory at Stranmillis. 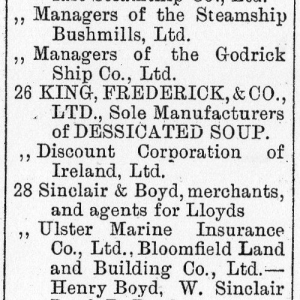 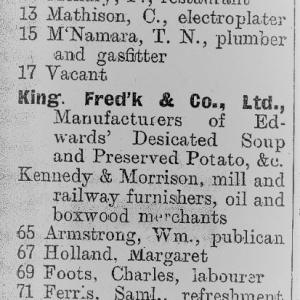 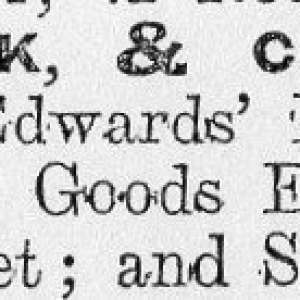 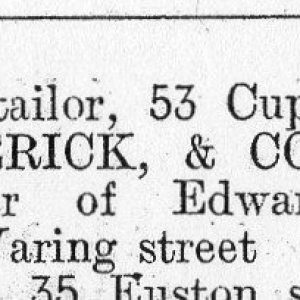 Links to a Modern Belfast Pub

In an era of extreme poverty , the low cost soup mix was literally a life-saver. The Edwards’ dried soup preparation became a household name. It was much valued for private family use as well as by restaurateurs.

Another speciality produced by this business was Gravina-Edwards’ Gravy Powder.  This was advertised as being composed solely of the finest extract of beef. Again the dried gravy was very successful. The fact that the soluble mixture produced an excellent gravy or a soup base in only 5 minutes together with its long shelf-life made it a staple in many households and culinary establishments.

A mark of the firm’s remarkable success is that by 1891 Frederick King & Co had business premises in London, Manchester, Glasgow, Montreal and New York.

“No review of the representative manufacturing and commercial concerns whose headquarters are in the busy and progressive city of Belfast would be complete without including some mention of the very noteworthy house of Messrs Frederick King & Co., Limited, the maker, patentees and proprietors of those widely-known and exceedingly useful specialities Edwards’ Dessicated Soup and Edwards’ Preserved Potato……Nothing has contributed more largely than this excellent preparation o f the potato to the prevention and the eradication of scurvy – that terrible affliction of seamen who are compelled to make long voyages without supplies of vegetables; and upon this score alone all mariners owe a lasting debt of gratitude to the inventor and manufacturers of Edwards’ Preserved Potato”

Industries of the North

Praise for the products was worldwide.

Dear Sir, Your ‘Desiccated Soup’ I find, on trial, to be everything you claim for it – cheap, healthful and nourishing, well adapted for domestic use, and should find its way into every household.

Yours etc A J Haile M.D.

Dear Sir, Please send me 12lbs more of ‘Edwards’ Soup’ c.o.d. This will make about 50lbs since January. My family thinks this soup is equal to any home-made soup, the vegetable feature in a dry state, and that it don’t spoil in being opened, being so different from any other preparations I have ever tried.

Dear Sir, I reply to yours of recent date. I would say that the samples sent to me by you have been tested at my house, and I consider them all first class. The Vegetable or White Soup is the finest of the kind I ever saw. I shall get in a stock of them this autumn for my trade, as well as for my own use.

Dear Sir, The Desiccated Soup sent arrived safely. After use it proves to be as near perfect as can be. Always ready, palatable. When properly made, nutritious, and fills a want among small families especially.

Closure of Frederick King & Co. and the end of Edwards Desiccated Foods

After years of decline, Frederick King & Co., Limited, Manufacturers of Edwards’ Desiccated Soup, Edwards’ Preserved Potato, and other Specialities (to give it its full title) finally closed its doors in December 1960.

However the contribution of this company to the fight against both scurvy and food poverty deserves recognition.

Frederick King & Co may have ceased trading amid changing times but the dried food market has continued unabated – particularly in terms of convenience foods & products that are easily transported, stored and cooked.

Common examples today would include:

A look at some of Belfast’s ‘oldest’ pubs in the city centre. People debate which is the oldest and which is the best. Why not try them yourself? 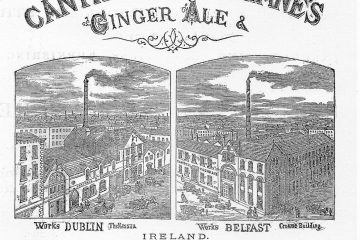 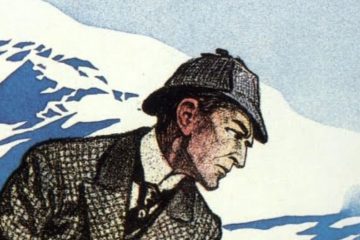 Sherlock Holmes and the Ulster Tailor

Sherlock Holmes is arguably the smartest fictional detective in literature but what connects him to real life Ulster tailor, John McGee? 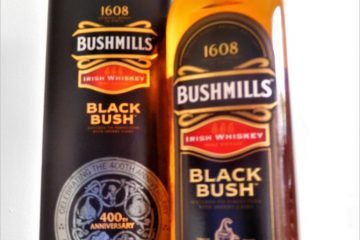 King James 1 granted a royal license to make whiskey at Bushmills in April 1608. Bushmills is the oldest licensed distillery in the world