A list of the most recent posts added to BelfastEntries across each of the information categories – People, Places, Products and more.

Whether you want to trace your Irish family roots or just want to know more about our people, places and products, we hope you will find something of interest.

Situated in the Glens of Antrim, the picturesque village of Cushendun lies on the north coast. But what links it to two classic TV dramas?

In 18th century Ireland body snatching was a real problem throughout the country. A variety of tactics were employed to deter the thieves… 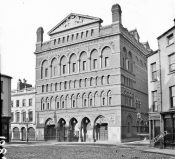 The story of Belfast’s Theatre Royal from it’s creation in 1793 to its unfortunate end in 1915. A history of both success and disaster

Black Francis was a famous highwayman in the late eighteenth century. His daring exploits have long been the source of local folklore

A peaceful County Antrim bay at the village of Cushendun, a couple in love and a tragedy that reverberates to this day.

Crown Liquor Saloon – ‘One of the great bars of the world’

The Inn, the Jailhouse and Robb’s Department Store, Belfast

The surprising history of Robb’s Department Store in Belfast’s Castle Place includes a famous Belfast inn, a rebellion and a jailhouse.

Ardglass is a peaceful little village 34 miles from Belfast with a picturesque harbour, a healthy fishing industry & a turbulent history

Saint Malachy’s Church in Belfast is a Grade A listed building near the heart of the city noted for it’s stunning design.

The love story of Nora Tattersall & George Arthur and their tragic deaths on the Cavehill, County Antrim in 1890 resonates to this day

Carnmoney Hill, 6 miles north of Belfast, rises to a height of 761ft allowing beautiful views over the city, shoreline and Belfast Lough.

The true story of ‘white witch’ Mary Butters, her attempt to cure a bewitched cow and her subsequent prosecution in court.

Ligoniel – The Village by the River

Sinclair Kelburn – The Tale of the Minister with a Musket

Rev Sinclair Kelburn was blessed with a strong social conscience and became involved with the reforming movement within the city of Belfast.

The story of Ormeau Park and it’s ‘Lost’ Mansion

Ormeau Park in the South East of Belfast was the city’s first public park. The park’s history tells of wealth and waste and a “lost” Mansion.

The Forgotten Town of Coole & the Church of the Holy Evangelists

The story of Coole parish includes a forgotten town, supernatural pacts, philanthropy & the history of the Church of the Holy Evangelists

The strange tale of James Haddock, a man who died in 1657 but whose ghost returned subsequently to give evidence in Carrickfergus Court

The Story of Saint Brigid

1st February is the feast day of St Brigid of Ireland. This early Irish saint is renowned for her kindness, learning and sanctity.

Waring Street Belfast – From Early days to the Merchant Hotel

Belfast’s Waring Street has a rich history with links to sea trade, ceramics, and Gulliver’s Travels. It now hosts the opulent Merchant Hotel

Ballymacarrett – From a Rural Village to a Shipbuilding Giant

A history of Ballymacarrett from it’s rural beginnings, to a small village and subsequent emergence as a hub of Belfast industry & enterprise

The history of the Castle Robin site in the townland of Mullaghglass dates back to the Bronze Age and features a rath, a motte and a castle